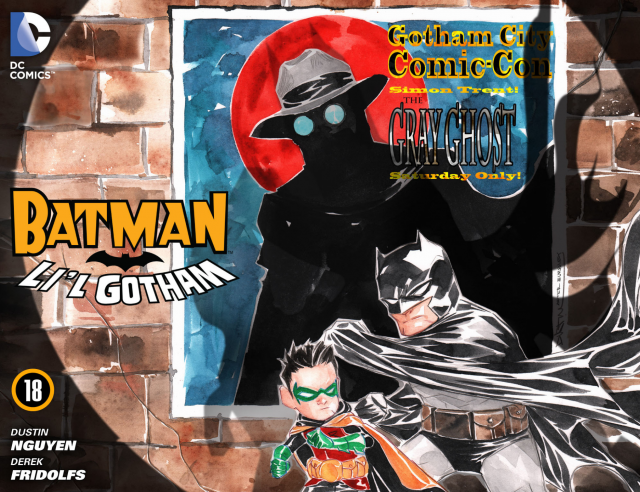 Carpenter tries to find time on her day off to work on a personal project. But thanks to Batman all the villains of the city keep clamoring for her services. Hijinks ensue, as is often the case with Li'l Gotham.

Chapters of this series tend to range from brilliant to good. This particular chapter definitely fits into the good category while not being one of the issues I’ll come back to multiple times. I liked it, but I didn’t love it. It was amusing enough, and seeing Carpenter again after so long is definitely appreciated. But a good chunk of my enjoyment comes from seeing some of the more popular characters acting all silly. Carpenter was fun enough, but I wouldn't really want to see more than just this issue involving her.

Who is this series good for? Well it’s certainly good for anyone that is tired of how dark the Batman books have become. In particular it’s good for fans of Paul Dini and Streets of Gotham, and to a certain extent Gotham City Sirens. Most of the characters showing up are staples of those series. It feels like a bit of a mixture of the Dick-Batman era along with a bit of the New 52 Batman and Robin thrown in there. I'd almost go as far as to say that Li'l Gotham consists of what many fans would consider the ideal Batman world. All the allies are working together peacefully rathe than resorting to constant angst driven conflict between each other.

Shippers might also find a thing or two to love. Particularly if they enjoy Dick/Babs and Bruce/Selina, with a few other minor ships thrown in here and there.

While the audience for Li'l Gotham may skew a bit younger than most Batman books, there are plenty of callbacks to less than mainstream characters for established Batman fans. As such I like to think of this series as both an introduction to Batman for younger readers, and a love letter to the stories of the past for older readers.

The release schedule is a bit infrequent since they’re sticking with the holiday themed issues (though oddly enough Holiday has yet to make an appearance), and while the digital first chapters are later being released in collected individual issues I’d say it’s definitely worth anyone’s time to spend the dollar each new chapter costs. With the possibility of trade paperbacks I think I’m starting to see a bit of a scheme on the part of DC with these digital first series. They’re just lucky Li'l Gotham is good enough to make me buy it thrice over.