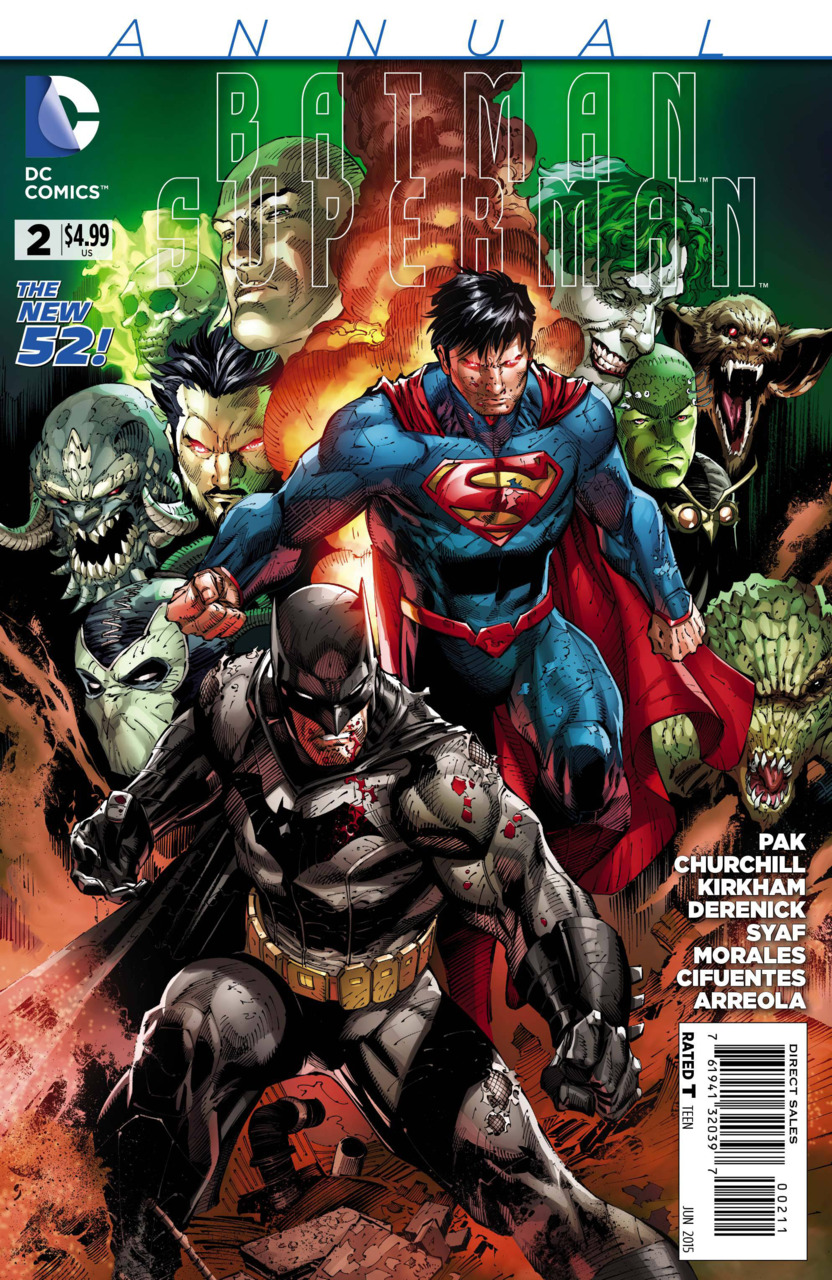 A weakened Superman, with the help of Batman, fights off a collection of arch-enemies while protecting civilians from minions of the Phantom King in Batman/Superman Annual #2.

The Phantom King, returned to his prison in the Phantom Zone after the events of Batman/Superman #20, sends out a mental suggestion to baddies all around the world. He calls on them to kill Clark Kent.

Clark Kent is in the Honeymoon Islands in the Bahamas as a civilian reporting on communities that were damaged as a result of the Doomsday battle. He is in contact with Batman and tells him about a black cloud which appears to be the Doomsday mist on the horizon. Clark leaps into Superman-mode and uses his Solar Flare power to incinerate the cloud. Using the Solar Flare power weakens Superman so he loses his super powers for 24 hours and has to continue on to the islands as Clark.

Clark finds some people scrounging food and medicine from the ruins of the city and tells them that they need to get to safety. Suddenly a Man-Bat attacks and while Clark is wounded trying to save a civilian one of the local women attacks the Man-Bat which turns on her. Luckily all are saved by Batman who fights off the Man-Bat long enough for everyone to escape down a manhole. The Man-Bat tries to stop them but is killed by Bane who, along with Cheshire and Killer Croc are on the island to kill Clark. Apparently Bane isn’t happy with the way Cheshire is controlling the dozen or so Man-Bats at her disposal and wants to kill Clark properly.

Bane calls out to Clark to surrender. One of the civilians, Robbie, suggests that they would be able to give up and be unscathed. Another civilian, Janice, disagrees and thinks that if they gave up they would be killed. Since communications have been cut by Superman’s solar flare the group searches for any weapons they can find in the abandoned building they are hiding in. Clark insist on helping Batman fight the bad guys despite his weakened state.

Killer Croc attacks a room in the building and finds that Clark has been tied to a post and is calling to Batman to release him. As Croc moves in for the kill Clark slips from the ropes as the building collapses on Croc. Clark was just Croc bait. As the floor collapses Croc is able to grab Batman’s leg, pulling him down to the depths. The remaining team disables the remaining Man-Bats using the weapons they collected. Cheshire arrives and taunts the team until Clark knocks her out with a well timed pipe to the head.

Robbie has left the team and gone to Bane to ask for his freedom in return for information about Clark and the other civilians. Bane is unimpressed with Robbie and kills him. Clark and the others arrive on the scene too late and are chased through the jungle by Bane. Luckily Batman, apparently unharmed by his earlier fall, arrives with a blinded Killer Croc in a harness. Crock mistakenly takes out Bane and the two fall off a cliff into the sea.

All appears to be resolved as Clark and the civilians wave goodbye to Batman as he flies off with the remaining baddies in tow. After some congratulatory backslapping   Janice, who has been ‘nudged’ by the Phantom King, stabs Clark who collapses. The Phantom King gloats that he used Clark’s natural habit of trusting people against him. The story ends with Clark face down in a pool of his own blood as we are told that the story will be continued in June when Everything Changes!

This is another solid Batman/Superman story. As in the last book, the Phantom King uses what should be Superman’s strength, against him. Last time he turned Superman’s family against him, this time he used Clark’s sense of people’s innate goodness against him. It was a good twist having Janice attack Clark though it was presented a little suddenly. Seeing Clark be so exposed was also very interesting, typically Superman is pretty much invincible and having him need to look after his own safety was refreshing. It is a little predictable though, whenever we see Batman looking like he has been defeated we can expect him to come in at the right moment to save the day.

There is some wonderful art in this book. Particularly the pages showing Superman’s memories of fighting some of his arch enemies was well done. Also, the pages where Batman brings a harnessed Killer Crock to the attack is very dynamically shown.

All in all, this is a very exciting and well constructed book. I’m looking forward to June to see where the story is going to go from here.