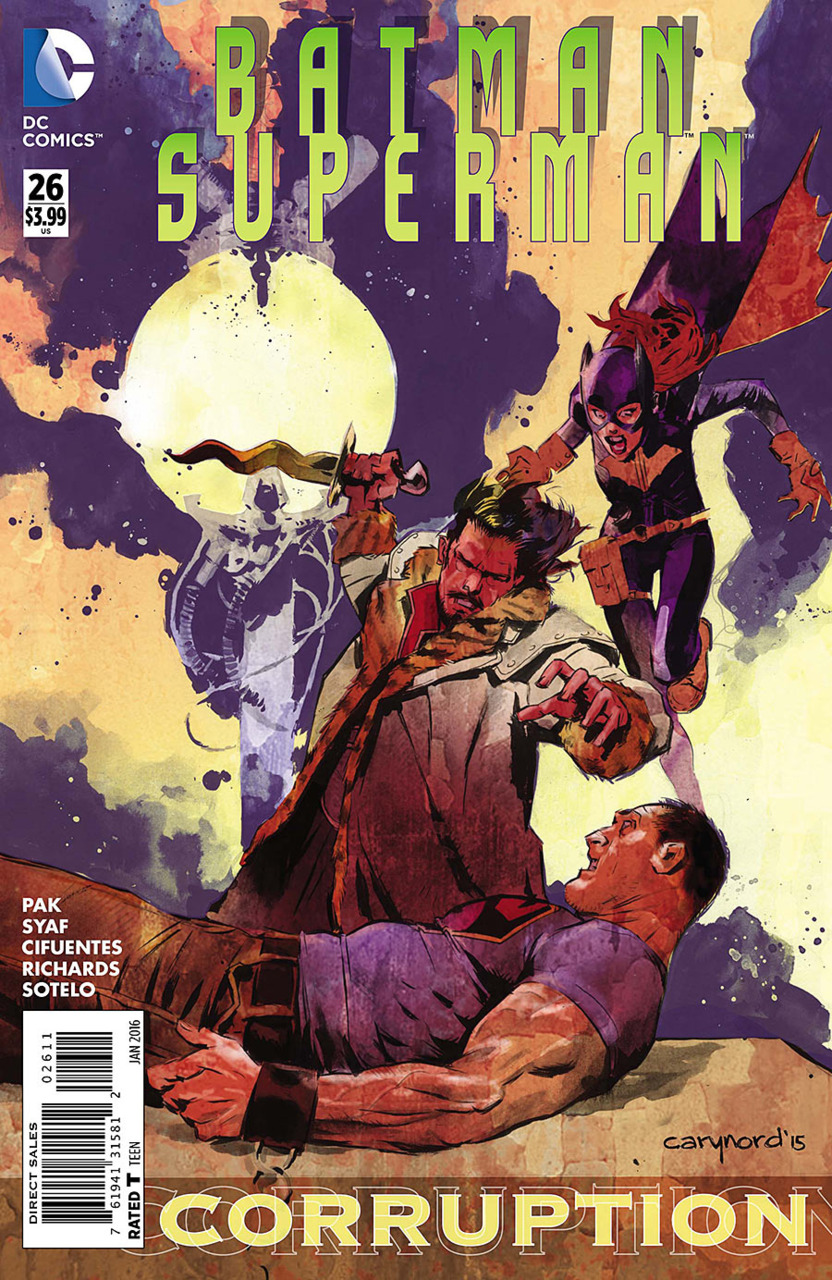 Issue #26 opens at Russian Nuclear Decommissioning Site 15218 in Siberia. As a violent winter blizzard is rapidly approaching, two men within a group of six, Yuri and Anasenko, argue how to go about extracting the uranium from a nuclear weapon. This tall task is fearfully being executed for Vandal Savage.

The group realize that their project is next to impossible especially in the midst of a storm. Anasenko suggests that the group should simply run from Savage but is quickly reminded by Yuri that Vandal Savage will without-a-doubt hunt them and their families down and kill them.

A silhouette of a large man along with three others approaches. Fearful that it is Vandal Savage and a few of his men, Anasenko and two other men draw their handguns and begin to fire at the silhouettes.

Immediately, the handguns are knocked out their hands by a batarang, a boot, and a large red-gloved hand. We, then, see a title-page with Red Hood, Superman, Batgirl, and Grayson standing over the men. Superman is holding one of the man’s still-smoking gun by the barrel.

Superman cuts straight to the chase, informing the group of men that they know of Vandal Savage threatened each of these men and their families. After initially being star-struck, the realization that Superman has lost his powers leads Anasenko to once-again draw his gun on Superman. He fears that powerless Superman will not only not stand a chance against Savage but will also anger him even more.

Proving that he is still incredibly strong, Superman picks up one of the nuclear missiles, not without nearly hurting his back.

Inside, Superman introduces the group to Batgirl, Grayson, and Red Hood, detailing how each of them will be helping the team. Batgirl will be looking over the camp’s tech and how to combat, if not stop, Vandal’s return. Grayson’s role is to help give each of the men and their families new identities. Lastly, Red Hood rightfully so is in charge of weapons and teaching them how to use them properly.

Outside, Batgirl looks into the potential teleportation device that Vandal uses to get to the site. She tells Superman that she’s hoping to reverse-engineer it, teleporting Savage somewhere else.

Back inside, Superman is playing with Anasenko’s son as Grayson is attempting to change him and his mom’s names. While looking at Superman, he says he’d like his new name to be, “Clark.” The scene closes with the boy playfully attempting to hurt Superman by stepping on is feet and even stabbing him with a fork in his shoulder. While Superman told the boy that hurt “just a little,” Red Hood points out to Superman while sitting on a snow-covered hill that he’s been bleeding in that area of his shoulder. Because Superman is not as strong as they need him to be, Red Hood proposes killing Vandal Savage instead of taking him alive. Batgirl and Grayson arrive, backing up Superman.

Only a few moments later, a group of non-sentient shadow monsters show up. The four of them, at times, literally rip these beings in half.

As the issue is nearly concluding, Jim Gordon’s robo-Batman finally shows up to help the team defeat the rest of the shadow monsters.

Batman reveals to the team his research, showing how Vandal has been working on this site for decades by paying and killing of numerous politicians. He, then, points out that the shadow monsters that Savage sent were not guarding the stockpiles of uranium but a specific area of the ice. The stealing of Waynetech’s artificial sun leads Superman to believe that what they were guarding was much more powerful.

Batman has everyone step back while he blows up the ice, revealing both the site of Waynetech’s artificial sun and a massive Nazi war ship.

Having never read any issues in this series up until now, I found this issue very easy to jump into. There were a few areas like Superman’s lack of powers that I was initially confused about but, overall, Greg Pak writes in a manner that I felt comfortable blindly walking into.

Syaf and Richards’ pencils are interestingly rough and choppy. At times, I find characters to be drawn with oddly-shaped bodies or looking bulkier than they do in every other comic line. For example, there are multiple shots of Batgirl looking quite ripped from head-to-toe but then later shots of her looking normal. I did also find it strange that, while in the snow, everyone is wearing some type of thicker snow gear except Batgirl; she’s in her standard suit. I enjoyed Cifuentes and Richards’ inks as well as Sotelo’s colors especially during the fighting sequences.

Overall, I enjoyed the story and am pretty interested to see what Vandal Savage has planned with that massive Nazi war ship.