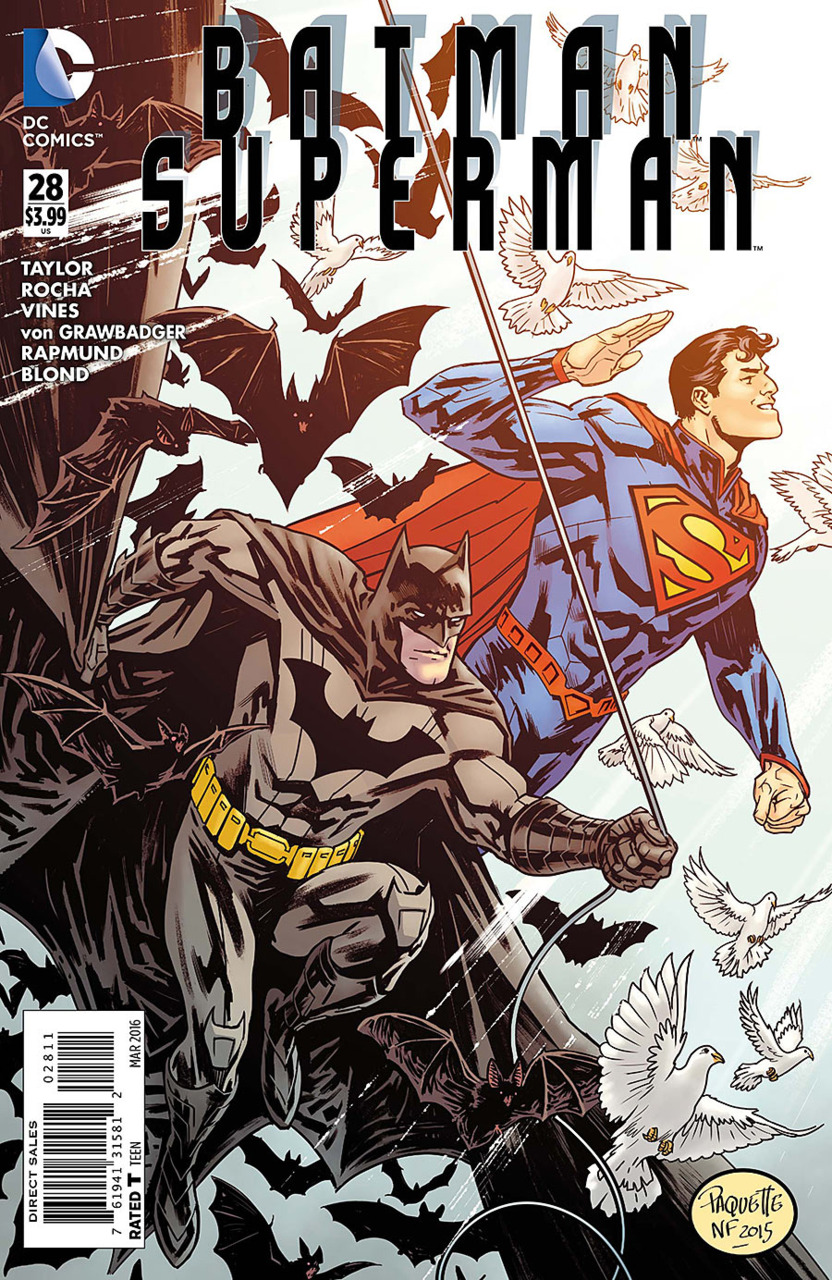 Tom Taylor begins his first of issue of Batman/Superman with an explosion at the Lunar Space Station, detaching a commander that was outside the Space Station doing some work. The commander speedily drifts into space leaving her helpless. As if things couldn’t get any worse, a piece of metal debris hits her helmet, slowly cracking the glass to her seemingly inevitable death. She closes her eyes, awaiting her demise when suddenly she hears something hit her helmet. The commander opens her eyes to see Superman repairing her suit with his heat vision.

Superman grabs her, flying her back to safety. As they enter the space station after rapidly repairing the its damages, he inquires if they knew what hit the space station. Something incredibly fast burst by the space station, colliding with the it and crashing on the moon. Superman flies to the moon to discover a giant dead person, the Batman and Superman logo  just to the right of them, etched into the moon’s surface.

In Gotham, the Gotham City Police Department and S.W.A.T. are exhausting all of their resources to attempt to stop an escaped Clayface. Batman arrives just in time with explosives to distract Clayface from harming Jim Gordon. As Batman is dealing with Clayface, Superman flies into Gotham, asking for Batman’s help. In order to speed up the process, Superman freezes Clayface and agrees to meet Bruce back at the Batcave after returning Clayface to Arkham Asylum.

After Alfred lets him in, Superman shares with Bruce what he discovered on the moon. He tells Bruce that Batman needs to see it. Alfred, in turn,  prepares the Bat space suit.

On the moon, Batman and Superman investigate the scene where the giant body was found. As Batman begins to have Superman scan the lady’s body, he notices a microscopic drone indicating that they are being watched. We see from a control room two silhouettes watching Batman and Superman on the moon. Once they hear them notice the camera, the two mysterious figures decide to destroy the camera. Just as Superman grabs it, the drone combusts into a small flame.

Back on the moon, Superman discovers that the lady was holding something in her hand. They pull a giant disc-like object and press a button on the disk. The object illuminates large foreign writings covering a map in the sky. Batman and Superman realize it’s Kryptonian. After reading through her writings and observing the map, it strikes Superman that she came across someone “that shouldn’t be there.”

Next: The Lost Kryptonian

Robson Rocha’s pencils are wonderful. He knows when to be detailed and precise as well as open and broad. His Inks and Colors team of Dexter Vines, Wade von Grawbadger, Norm Rapmund and Blond deserve commendation as well. Together, their work is stunning. The panels and pages of Superman and Batman in space, fighting Clayface in Gotham, and discovering the giant deceased Kryptonian on the moon each are reasons to check out this issue. The color contrast between the fight with Clayface and their moon explorations are visually appealing. However, no panel in this issue is as visually fantastic as the two-page spread of Superman overlooking the dead body that he discovered.

I thoroughly enjoyed this book. After not having both Superman and Bruce Wayne as Batman together for some time now, it was great to return to the original cast. I also enjoyed seeing an awesome and, in recent years, rare Clayface battle for a handful of pages. Tom Taylor’s first issue along with the entire new creative team hit this issue out of the park. There is so much tender meat to chew on. Why was Lobo hired to kill that giant lady? Who is Superman referring to when he says someone has been discovered that shouldn’t have been there? With all my questions out on the table, I am eager from Tom Taylor, Robson Rocha and co’s next issue.