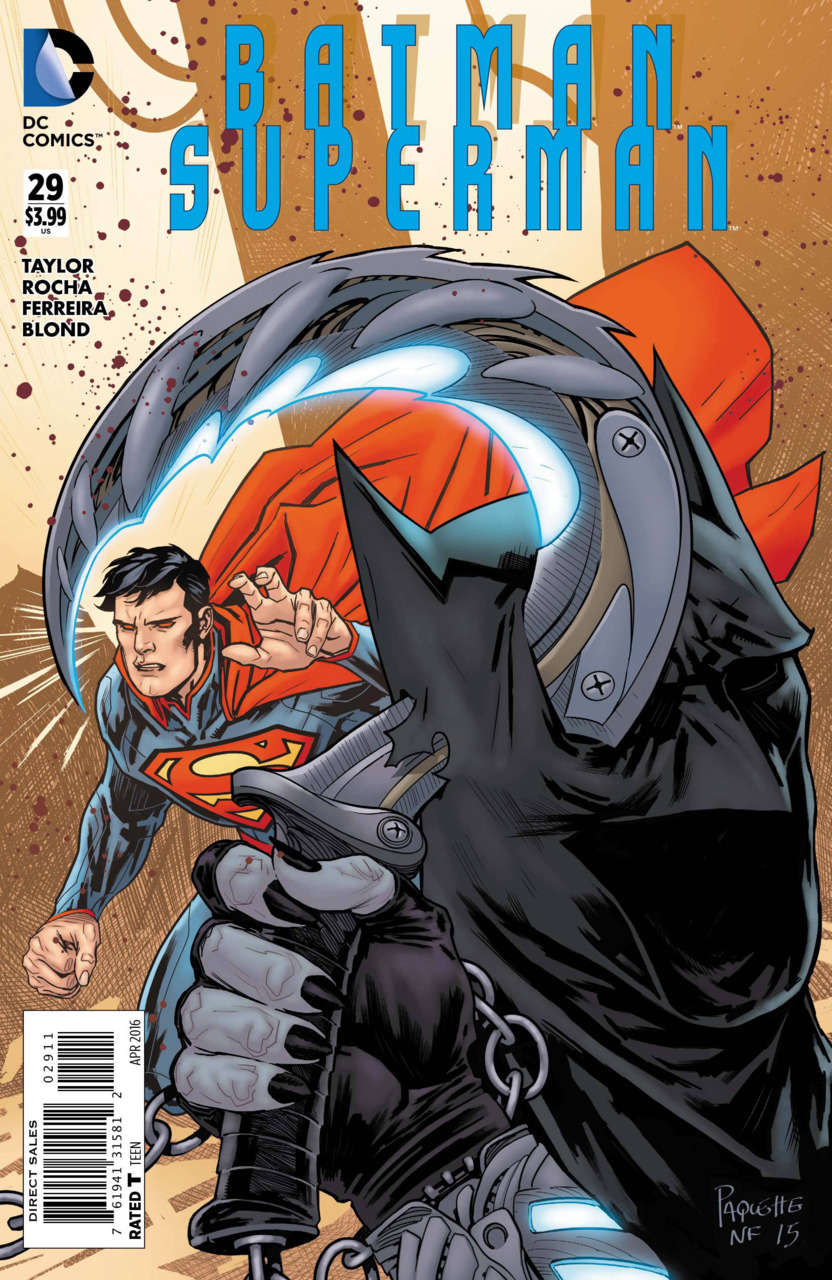 Synopsis: On the moon, Batman and Superman are investigating the apparent murder of a gigantic life form. The being had  left a message in Krypotnian that seemingly was intended for Kal-El to view.

Superman senses that another giant life form is rapidly approaching. At the being’s arrival, the ant-sized-in-comparison Batman and Superman opt to follow the giant as it takes the fellow deceased giant back into their spacecraft.

After being given a universal translator by Batman, Superman confronts the giant lizard creature. Kal-El believes him to be the father of the deceased being. They inquire how the being would’ve known of them because of the Batman and Superman signs drawn in the moon’s surface near her body. The father inform them that they are well-known in the universe due to their survival from battling Darkseid. After much discussion, it becomes evident that the daughter had discovered someone in scorch space, a super-sun with intolerable heat. Although the father denies the reality of this, Batman sends Superman to investigate that area of the universe.

Outside the spacecraft, Lobo discovers that the body has been taken, likely by her father. He oddly refers to the victim as their “first victim” as well as notes that “she held out” for a lot longer than he estimated. After investigating the scene more, he realizes that Batman had recently been there as well.

Meanwhile, Batman continues to ask the father more questions. In the midst of talking, Batman notes that the ship was quite quiet. The father acknowledges the validity of Batman’s assessment, stating that this spacecraft as well as everything their type build runs on power harnessed from starlight. He says that because of this vast amount of energy they’ve possessed, his daughter was able to heavily explore the universe. He comments that perhaps from time-to-time, she even discovered things that should’ve stayed hidden. He asks Batman that, since her discovery apparently led to her death, if he was worried for Superman. Batman confidently responds, “No. He’s Superman.”

At the super-sun, Superman blasts through the flames and shots fired from beings protecting the sun. Superman crashes through, destroying much of the building while discovering what he was searching for: an imprisoned and worn-down Kryptonian being used to harness energy from the sun. He notifies Batman while freeing the slave and taking him back with him to the moon.

In the spacecraft, a beeping notification goes off. Batman questions what the noise indicated. The father states that something is outside the craft, overriding the ship’s defenses. After putting pieces together, Batman calls his bluff. He questions how the father knew where to find his daughter’s dead body. After the father denies the relevance of Batman’s question, Batman continues to accuse the father of being more involved than he had previously claimed. Batman asserts that the father’s ship doesn’t run on starlight but sunlight and that his daughter suspected something that got her “into trouble.”

As the father essentially confesses that Batman’s accusations are true, Lobo climbs into the station leading Batman to call for Superman’s help. After the two of them exchange a few blows, the father slams Batman into a wall, breaking his helmet. At that moment, the father questions a minor noise that goes off. Batman states that it was the detonator to the numerous explosives he had been placing in the spacecraft the whole time. The explosives detonate, blowing off half of Lobo’s face as well as buying Batman enough to slip out of his space suit and steal Lobo’s ship.

The issue concludes with Batman flying off in the stolen ship while communicating with Superman as he flies attempts to fly back to Batman. As Batman informs Superman that they wanted him all along, the Kryptonian that Superman saved appears to blast him with some sort of green force heavily harming Kal-El.

Art: Robson Rocha and Júlio Ferreira’s art as well as Blond’s colors are on point. The handful of Superman shots placed over a fire backdrop and speeding through space are stunning. Batman’s scene with Lobo is also really enjoyable. Their collaborative work alone is worth far more than the cover price.

Final Thoughts: Wow. I haven’t enjoyed an issue this much in quite a long time. The story, the humor within the dialogue, the art. Overall, this was such an exciting and interesting story. The next issue can’t come soon enough.