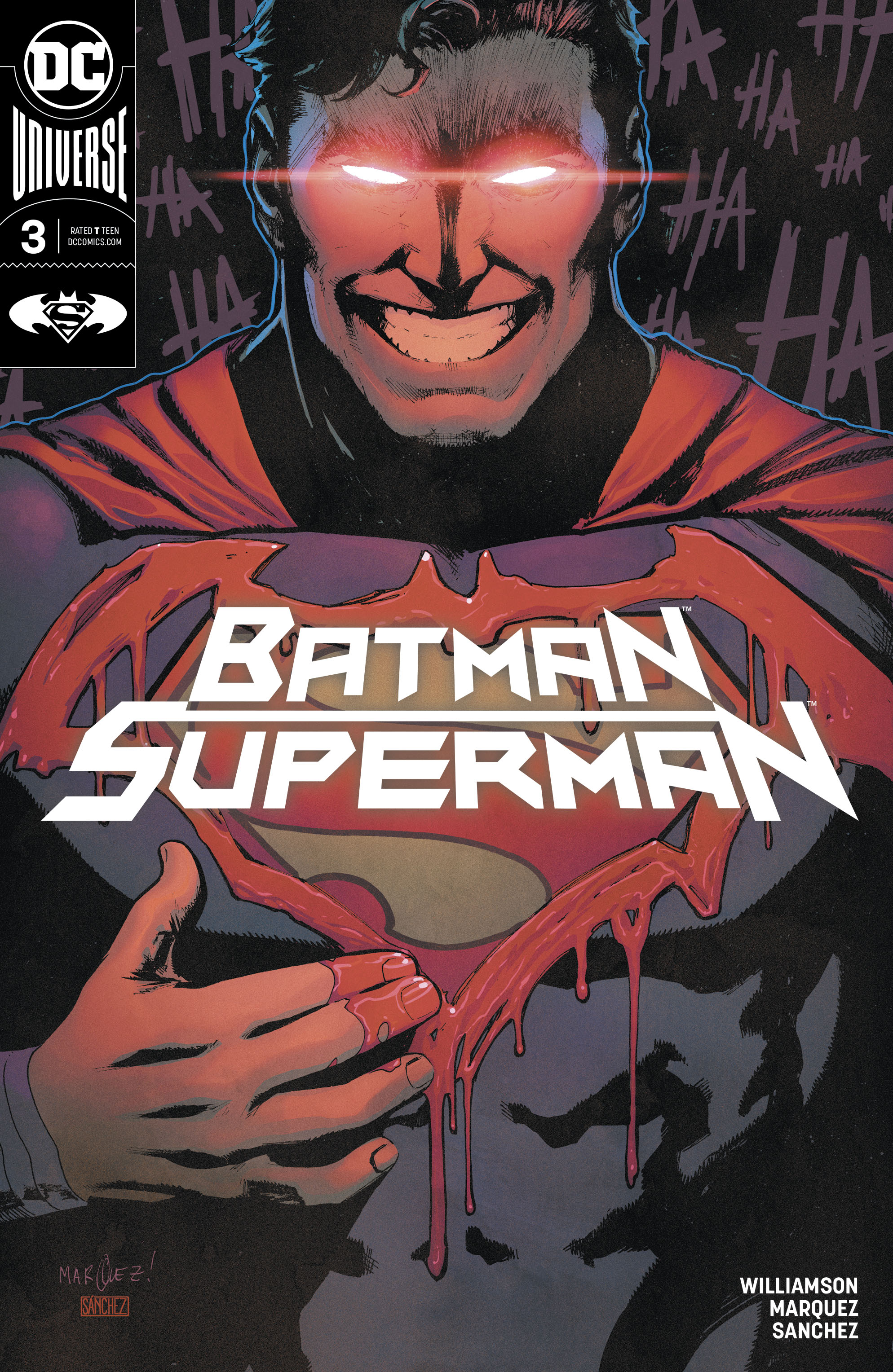 Overview: Superman goes undercover to investigate what the Batman Who Laughs’ next move is.

Synopsis (spoilers ahead): Batman ponders quietly about his career, and how his main tool in fighting crime is fear. But to harness fear correctly, he must know others’ secrets. Over the years, he has also studied his friends, family, and allies to prepare for the worst case scenarios. He invaded their privacy by studying their strengths and weaknesses all in the name of justice. He always told himself he did those things because he was the only one who could be trusted with such knowledge. But in reality, all he did was betray everyone’s trust. Everything has led to this moment, and it is all his fault.

In order to discover the other members of the Secret Six and figure out the Batman Who Laughs’ endgame, Superman has gone undercover and infected himself so that he can learn the Batman Who Laughs’ plan. Given his physiology, Superman has more time than most before he truly succumbs to the darkness. Although this is risky, they have no other options.

Superman breaks the Batman Who Laughs out of his containment cell, and before they escape, they head to the Hall of Justice armory – home of all confiscated weapons from Justice League missions. Superman wants to leave and cause chaos, but the Batman Who Laughs tells him his old friends must not die yet, they have a larger role to play. Superman comments Shazam did not share anything about the plan.

The Batman Who Laughs shares the infected are going to kill every single living thing in the multiverse. He says he wants people to die like Superman’s mother. When she died, she wanted to be in the rocket instead of her little boy. But she is dead, and Lois and Jon will be soon as well. Superman begins to blow his cover, and Batman swoops in and injects him with the antidote. Batman activates the Hall of Justice restraints and tells Superman to step down – the Batman Who Laughs knows they were trying to trick him. They restrain the Batman Who Laughs and leave the Hall of Justice, with Superman commenting that the undercover mission produced no results. Batman says he was able to learn something: he knew who else was infected. He leaves Superman to rest in a yellow sunroom as the last of the Joker toxin clears his system.

Batman chases down Commissioner Gordon in his Batmobile and pulls him over. Gordon taunts Batman and activates his watch. Out of Gordon’s vehicle, Gordon’s old Batman armor appears and engages Batman.

Superman flies in and helps Batman take down the Gordon and the robot. After knocking both out, Batman decides not to take them both back to the Batcave, because that would be too predictable. Instead, they decide to take them back to the Fortress of Solitude.

Back at the Fortress, Superman has Kelex take Gordon’s defunct armor into his lab. Superman then suggests bringing everyone to the Fortress to debrief them on the situation. Batman is hesitant; he wants to tell others, but it would not be wise to bring them to the Fortress given there are other infected heroes out there. An explosion occurs, and Gordon’s armor reforms itself, revealing Blue Beetle was appearing as the armor all along. This was an elaborate Trojan horse by Gordon to bring in the infected Jaime Reyes to the Fortress of Solitude. He ensnares the heroes and takes over the Fortress.

Elsewhere, the Batman Who Laughs contemplates on how he can feel every piece of his puzzle coming together. However, he is not alone in this game. Someone else out there is spreading doom and twisting the multiverse. There is competition out there to be the apex predator. He knows Luthor is almost finished completing his plans. This means they are set on a collision course.

Analysis: I liked this issue, but it was unfortunately spoiled a few weeks earlier that Jamie Reyes would be one of the Secret Six. This is unfortunate because I was really looking forward to the suspense of not knowing who the Batman Who Laughs infected. Outside of that, I really enjoyed the reveal. When he first reformed out of Gordon’s old armor, I thought he was The Murder Machine (Cyborg Batman from Dark Nights: Metal).

It took me a second to recognize the armor, and then it hit me it was Gordon’s from Snyder’s Superheavy run. I appreciated that bit of continuity.

I thought the art was okay for most of the issue. I was not a big fan of Blue Beetle’s look.

Final Thoughts: Overall, I thought the story was fine. There is a lot happening, and we are just along for the ride. I am curious where this is all going.