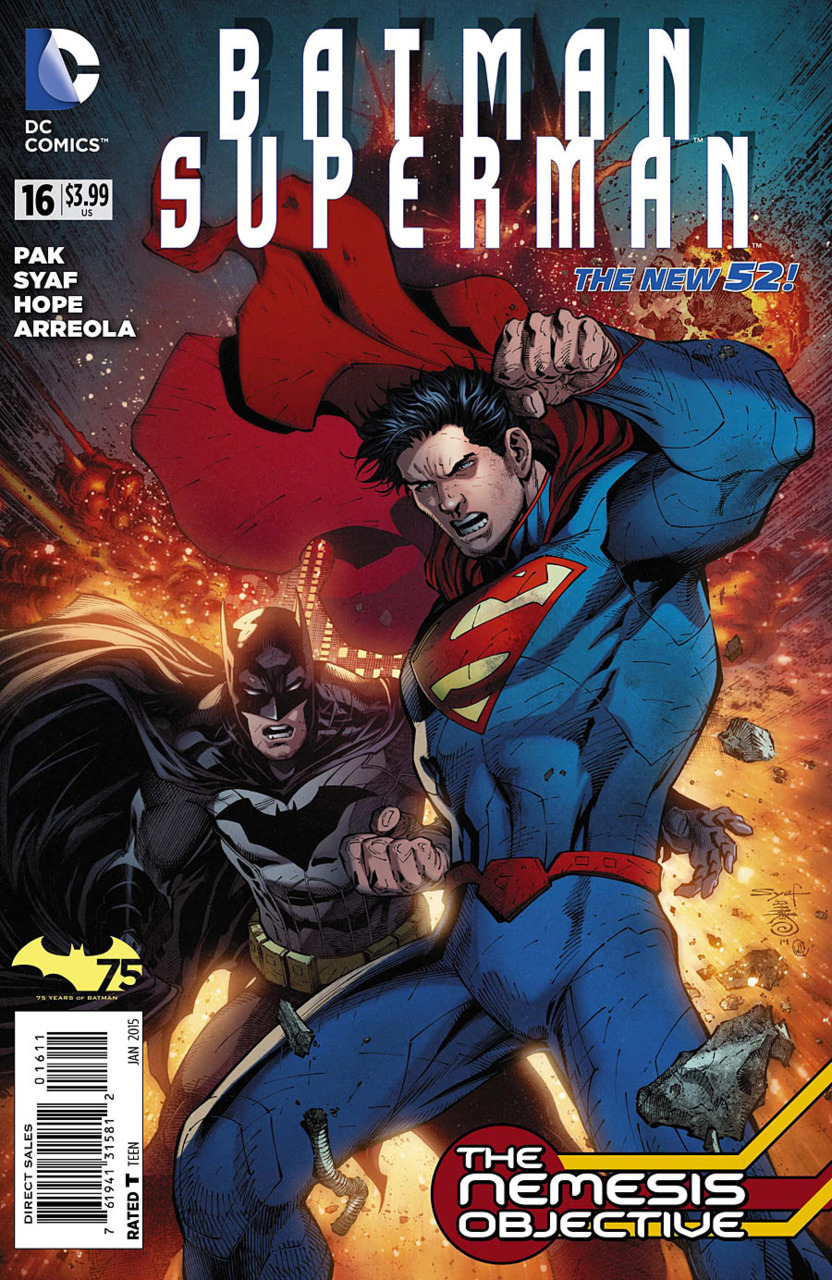 I kinda have mixed feelings on this issue. Greg Pak has been doing an amazing job on Action Comics. But here, it irritates me because Superman is always a genuinely good guy, why Batman is a complete butt hole. I would think having a comic with the world’s greatest two superheroes who also happen to be best friends, would display their friendship and helping each other out. But I don’t get the sense of that. They don’t feel like friends. They feel like they are teaming up because of a sense of duty.

This just doesn’t feel like the Batman that I know and love, and I kinda wonder if Pak even likes Batman. He doesn’t seem to anyway. There’s a scene in particular that I’ll get into more later where it’s the total oposite of the animated version of Batman. Also, this whole story arc is hanging on the question: ‘Who is Superman’s Joker?’… I have a problem with this. So because Joker is the best supervillain, every hero needs someone just like him… I don’t agree with this. Having a Joker for Superman won’t work the same as it does for Batman. That’s like saying that Green Lanetern needs a Joker… No he doesn’t. He has Sinestro. Or Aquaman needs a Joker. He has Bkack Manta. The Joker isn’t just a villain you duplicate, and give to every superhero, or he then looses what makes him, HIM.

Anyway, enough of my rambling. Here’s what happens in Batman/Superman #16:

Superman, Krypto, Supergirl, and Steel are transporting some Orca whales, and do so successfully. Suddenly, all of Superman’s allies and whales are shot in the chest by some sort highly technical alien sniper that Superman could barely detect. The whales die, but his friends are okay.

At the Metropolis Hospital, two guys dress up as Superman and Batman to give the kids there hope. When suddenly, the guy dressed as Superman is also shot in the chest. Not wanting to scare the kids, he acts like its nothing, and leaves the room – dying in the hallway.

Clark learns about this, and gets some info from Lois. He immediately suits up, and invites Batman to join him. They head to the hospital to try to figure out what happened, but Superman gets sidetracked by the kids there, and entertains them. Batman grows irritated, and wants him to be focused. This part irritates me, because there was a Justice League Unlimited episode where Batman was the one playing with the kids. I loved that, because it humanizes him, and adds to his character. But with this, it kids ruins that for me.

They head to the Batcave to try to figure out who it could be, but Batman rules out Luthor, Hammond, and Cyborg Superman because they don’t hate him enough. They don’t want to make him suffer, they want him gone. Batman tells him he has a Joker, and everyone he cares about is at risk. Clark tells Bruce he doesn’t want to be like him.

Suddenly Bruce’s computer is hacked, and we see a live video feed of all of Clark’s loved ones. Superman flies off to save them, when Luthor, a singer, and military general are all shot…

I didn’t care for how things were presented here, but it could end up being a solid idea. So until I get more information, I give Batman/Superman #16…