Review: Batman: The Telltale Series: The Enemy Within-Episode One 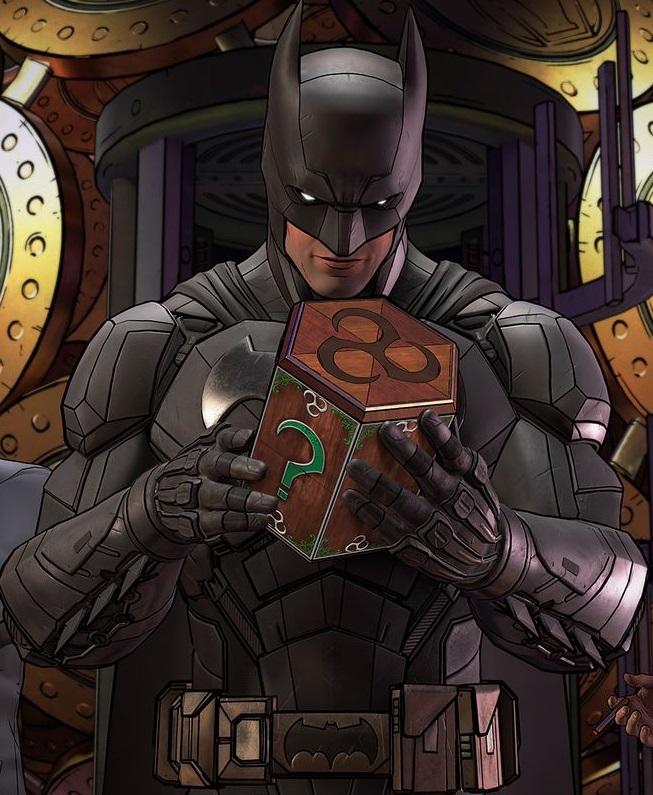 Overview: In The Enigma, the first episode of Batman: The Enemy Within, Batman goes up against the Riddler, is introduced to Amanda Waller and her “Agency,” faces an unspeakable tragedy, and learns just how easily trust is lost.

Review (Spoilers for Season 1 Ahead): For those unfamiliar with Telltale and their game series, think of Batman: The Enemy Within as the video game equivalent of Choose Your Own Adventure books. You’re not given the freedom of the Arkham series to explore large areas and fight waves of enemies. You are watching essentially a two-hour movie and asked to make dialogue choices, solve simple puzzles, and participate in quick-time-event combat scenes along the way. Some of the choices you make are minor, some have lasting consequences in how the tale unfolds. As my roommate pointed out during my play through of the game: “Wow, there sure is a lot of story in this.”

I booted up this episode having fully played through, and enjoyed, the first season. So I went into this with pretty high expectations and aside from a few issues, they were met.

The episode begins a year after the events of the previous season, Lady Arkham is gone, Two-Face is in Arkham Asylum, Catwoman is MIA, and John Doe, Bruce Wayne’s green-haired former cellmate is free and looking to reconnect. Batman’s work is never done though, as the Riddler shows up, in this universe an older figure that originally terrorized Gotham back when Bruce was a child. This series plays with the Batman mythos to a great degree, with Thomas Wayne being a crime boss and Vicki Vale being a super villain, but for those expecting a Gotham-level of camp craziness, you’re going to be disappointed. The Riddler in the Telltale series is a complete monster, with death traps straight out of Saw and a question mark-shaped cane that comes in handy when a throat needs to get slashed. From the opening scene he poses a real threat and is treated as such by Batman and Commissioner Gordon. That is, until Amanda Waller shows up and takes over the case.

I won’t go into too much of the story as there are some intense twists and turns that shake up the Batman Universe in major ways. Unfortunately the ending of the episode starts hinting at a Suicide Squad story line, which I’m so burnt out on I hope isn’t the case. And, in true Telltale fashion, while you can’t prevent certain scenes and events, you can have a huge impact on how characters feel about Bruce Wayne and Batman, which will reverberate as the story goes on. For example, I chose to stonewall Waller and stay true to my friendship with Gordon, which helped to smooth over an issue of trust he felt toward me later in the episode, but also means Waller is not going to be my greatest fan going forward. I’m also very interested to see how a certain character’s daughter plays into the larger story. Again, I don’t want to spoil anything but I am getting a Batgirl vibe off of her.

So the writing, acting, and story line are fantastic, but this isn’t a movie, it’s a game. How does it play? As I stated before, the actual interaction is relatively minor, and aside from one Riddler puzzle near the end, I never really felt like I was a major player in the events unfolding. So if you’re expecting to “feel like Batman,” that isn’t going to happen. Combat scenes are usually just following a button prompt on the screen or flicking the analog stick to match a movement. I made it through the entire episode without missing a single prompt. It’s not exactly taxing on your skills. That being said, the Telltale games never pretend to be more than that, so as long as you go into it knowing what the actual gameplay experience is going to be you’ll be fine.

What does need a little work is the actual engine the game runs on. The characters and backgrounds look fantastic with a highly detailed comic-book aesthetic, but the actual game itself runs into frame-rate issues and weird pauses. I can’t imagine it’s taxing the PS4 all that much, and Telltale games are almost known for this problem. Still, it’s a problem so even if it’s part of the charm, the company needs to look into upgrading their game engine. Especially as they lean more and more into offering cinematic experiences.

Overall the first episode of Batman: The Enemy Within continues the engaging narrative of the first season with a fresh take on Batman, his allies, and his enemies without falling into the traps of other media interpretations. I’m nervous about where the story line is going to go from here in the remaining four episodes, but if I care that much, it must mean the game is doing something right. If you’ve got a couple hours to spare and don’t mind a relatively passive experience, definitely check this game out.

Batman: The Enemy Within is available on the PS4, Xbox One and PC.