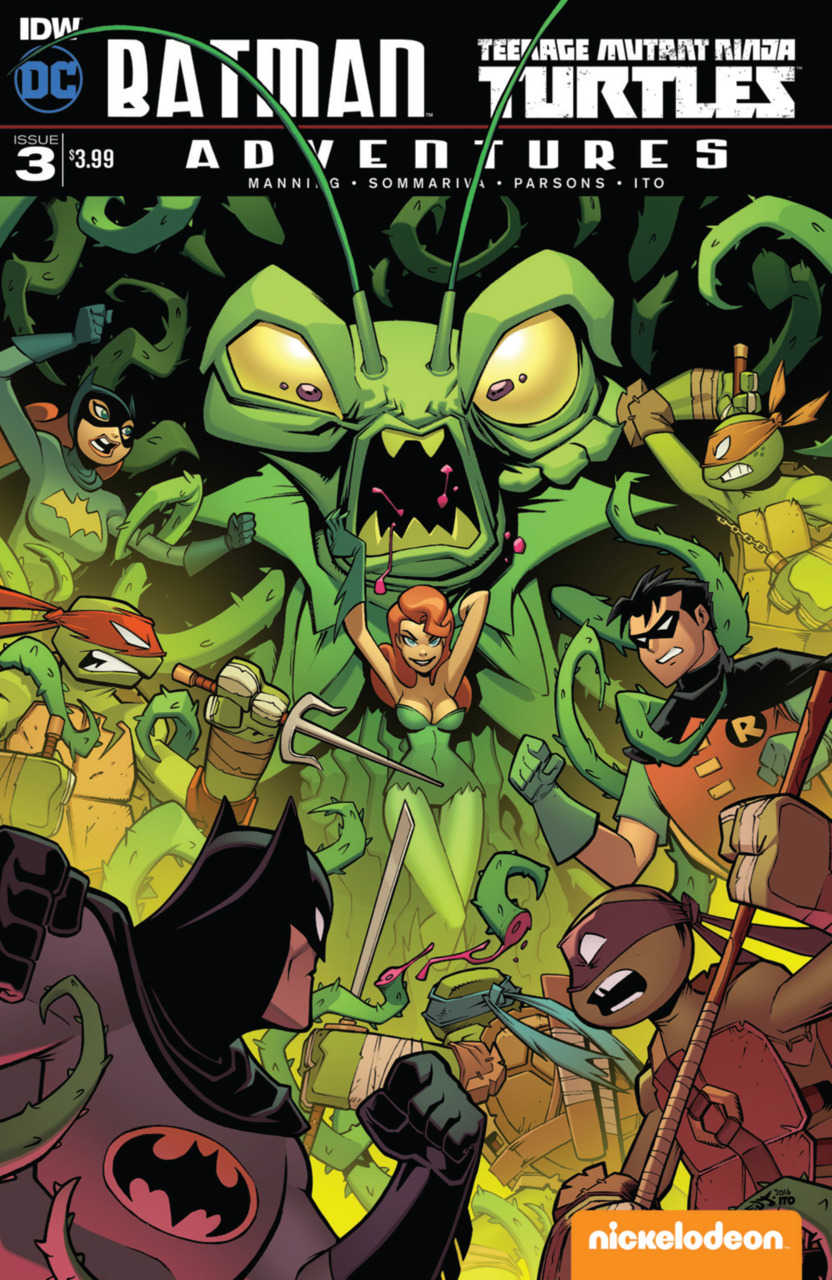 The Turtles, Batman, Robin and Batgirl take down Poison Ivy and Snakeweed.  Meanwhile the Joker makes quick work of the Shredder with a face full of Joker venom and the Joker appears to have taken over the Foot Clan.  The Turtles and Batman’s team then speak in the sewers about the Kraang portals that have turned up in New York and Gotham. A news report splits the team up, with Robin, Batgirl, Mikey, and Donnie going looking for more portals while Batman, Raph and Leo investigate reports a panicky mob in the city.  Robin and Batgirl run across a foot ninja with a creepy painted Joker smile and the issue ends with Leo and Donnie separated from Batman and under the influence of the Scarecrow.

The writer Mathew K. Manning and artist Jon Sommariva deliver another fast paced issue. The issue spends the majority of its time focusing on the fight between the heroes and Poison Ivy and Snakeweed which is a fun fight, but doesn’t really add anything to the story.  The story seems to be largely still in set-up mode.  Batman, his team and the Turtles have now met and the Joker keeps himself busy through the issue, but there’s very little here that moves the plot along.  We are now half way through this miniseries and we still have no idea of what’s really going on or why Batman’s villains have been transported to the … TMNT-verse?   I’m not expecting the answer to be terribly complicated, but the story is going to have to address it at some point and I hope the answer doesn’t feel like an afterthought with only three issues of story left to go.

That having been said, you can read the sheer glee the creative team is having with this title.  The story continues to have the feel of a couple of kids playing with their action figures. The story may not be terribly plot heavy, but it’s hard to deny the fun of the Joker taking over the foot clan or the Scarecrow screwing with the minds of the Turtles.   I also don’t think it’s an accident that so far the Bat Villains are wiping the floor with the Turtles’ villains, as if they are here to show them how it’s done.

The characters continues to be well handled and Manning seems to have a feel for the individual voices of the characters, particularly the Turtles, with Mikey providing comic relief throughout the story.  Batman is very much what you’d expect and quickly starts running the show.  I do feel like Robin and Batgirl get washed out a little, especially when they share time with the colorful personalities of the Turtles.  Also a big high-five goes out to Manning for working a Vanilla Ice reference into the story.

Sommariva’s art continues to give the story a light cartoony tone that matches the story and keeps walking the fine line between the art styles of the Turtles with Bruce Timm’s Batman designs.  Sommariva does a better job then the previous issue with the action sequences, notably the Snakeweed fight.

While not particularly plot heavy, the sheer fun of the issue continues to drive this story forward and it’s a blast to read.  More please.