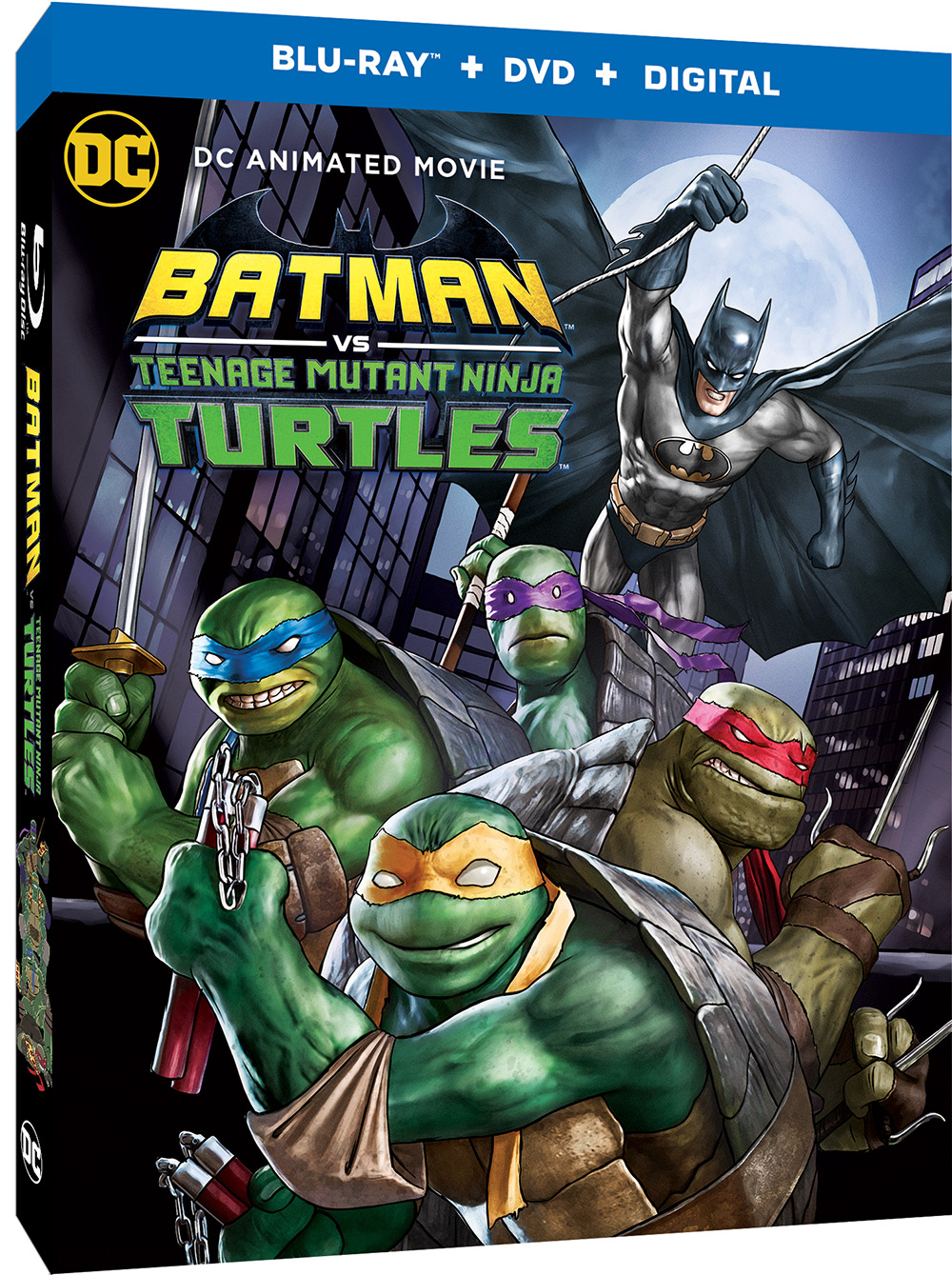 Overview: In an animated adaptation of the comic book mini-series by James Tynion IV and Freddie Williams III, the Teenage Mutant Ninja Turtles come to Gotham City and team up with Batman and his team to take on the combined might of the Foot Clan and the League of Shadows.

Synopsis (spoilers ahead): The film opens with Barbara Gordon visiting a lab at Powers Industrial. Just as Barbara is about head into action, the shadowy silhouettes of the Teenage Mutant Ninja Turtles arrive to take on the Foot, but not before the Foot make off with an experimental generator. Batman determines that the theft is the latest in a series of tech company thefts, and sets up a cloud seeding device being developed by Wayne Enterprises as bait. The Turtles, who have come to Gotham following the Foot clan theft of a quantity of mutagen in New York City, also arrive at Wayne Enterprises and run across the Penguin and his goons, who they take down. Meanwhile, the Foot arrive at Wayne Enterprises, only to find the lab is empty and Batman is waiting for them. Batman takes down the Foot which leads him to a prolonged fight with the Shredder, which almost ends in a draw before Shredder uses an ancient ninja technique that Batman barely survives as Shredder makes his escape.

After gift-wrapping Penguin’s thugs, the Turtles run across the Batmobile, and then Batman, leading to a fairly one-sided fight in Batman’s favor before the Turtles drop smoke bombs and disappear. Meanwhile, Shredder arrives at his lair and meets with his new partner, Ra’s al Ghul, unaware that Robin (Damian Wayne) is watching from the rafters. The Turtles track Batman to the Batcave where they are attacked by Robin which is cut short by Batman and Batgirl’s arrival, which leads to both teams realizing they are on the same side.

Shredder and Ra’s Al Ghul proceed to raid Arkham Asylum where they free the Joker and give him a vial of mutagen in exchange for some of his Joker toxin. Joker proceeds to free the other inmates and doses everyone, including himself, with the mutagen, causing them to transform.   Batman, Batgirl, Robin, and the Turtles arrive and fight there way through the transformed inmates. As they face off with the Joker, Batman is dosed with a combination of mutagen and Joker toxin, which combined turns the subject into a mindless beast, and Batman is transformed into a mindless bat-creature.   Batgirl, Robin, and the Turtles manage to subdue Batman and dose him with an anti-mutagen which restores Batman to normal.

As Batman and the Turtles regroup, Shredder and Ra’s get their hands on the Wayne Enterprises Cloud Seeder, with the plan to blanket Gotham in the Joker venom/mutagen and watch as the infected people tear the city apart. Batman initially orders the Turtles out of Gotham, but is convinced that the only way to win is to work together as a team.

Analysis: To start, it is easy to see how much fun this project was for the filmmakers to put together. The Teenage Mutant Ninja Turtles has always been a property very aware of its silliness and this film at its core I think just asks the audience to just kind of go with it.

The film follows the first James Tynion IV/Freddie Williams III miniseries fairly closely. Of the changes made, I think the best choice that the film makes is to ditch the alternate dimension plot point and just set up that Batman and the Turtles simply operate in different cities, which is a simple solution to an overly complicated premise that I never liked in the original series. There is a lot of love shown to both the Batman and Turtle universes, with a lot of nods to the history of both characters. Since the nature of the film being set in Gotham, the story essentially has the Turtles and their world let loose on Batman’s world and the filmmakers make good use of the opportunity to have new toys to play within the sandbox. It’s fun to have the Turtles walk around Gotham City and call out elements like the ever-present blimps over the city.

I do think that the film does suffer a bit from an uneven tone. The film, like many other DC Animated features, leans into is PG-13 rating, resulting in what is a fairly violent film. The fight scenes, in particular, are well executed, but still fairly brutal with people being shown stabbed and in one case, killed by a ninja star to the head. While I don’t have a problem with this decision on its own, the film also skews to the younger audience, with an awkward and simplified plot where Batman has to learn the value of teamwork. That seems to have more in common with the kid-friendly Batman Unlimited line of films from a few years ago. The moment where Batman learns this lesson is a clunky scene where Batman changes his mind about working with the Turtles for essentially no reason other then the story tells him too. I think it would have been a lot stronger of a story point if Batman had stronger reservations about working with the Turtles before the Arkham sequence, and after they save his life and restore him back to normal, that should be enough of a moment for Batman to have a change of heart.

As a result, I’m not really sure who is the intended target of this film. Especially as the film hits its third act, where Michelangelo and Batman get out of a jam by Mikey going wild by pressing every button in the Batmobile, or Batman defeating Shredder with a “Cowabunga”. It isn’t that these moments aren’t fun, because they absolutely are, but I think that it signals that the movie doesn’t know what it wants to be. As a result, it is too violent for small children, but too simplistic and silly for a more mature audience. I think that the filmmakers should have picked a lane and stayed there instead of trying to have it both ways.

The animation has a Saturday morning cartoon feeling and doesn’t particularly feel cinematic overall. I think that the character designs are a little too simplistic. That being said, the film comes alive in the fight sequences and the initial meeting of the Turtles and Batman is a standout.

The film is fairly well cast. Tom Kenny makes another welcome cameo as the Penguin. Troy Baker does double duty as both Batman and the Joker, having played both roles in a variety of animated projects and video games. Baker’s Joker is very much influenced by Mark Hamil and he does an admiral job in the part.   Baker’s Batman, however, is a weak link in the film. While I think it works perfectly fine in something like the LEGO DC Superheroes franchise, in a story where Batman is intended to be played a little more straight, his Batman seems a little bland, and lacks the weight and gravitas that actors like Kevin Conroy, Bruce Greenwood, or Jason O’Mara have brought to the role in recent years. It’s a similar issue that I have with Ben Giroux’s Robin in the film. I think that they should have gone with a younger actor rather than have an adult actor do an approximation of a thirteen-year-old boy, which I found distracting. The voice actors for the Turtles do an admiral job and are a highlight of the film, and very much seem in keeping with the Turtles as we know them. I do admit that I found the decision to bring in new actors to play the roles as opposed to going with actors that Warner Animation frequently uses such as Greg Cipes and Rob Paulsen who have played the roles in the past, took some getting used to, but it didn’t take me long to adjust.

Final Thoughts: This movie was a lot of fun to watch, but its very surface level and as a result, I don’t know how often I’m going to revisit this one. That being said, if you’re a fan of Batman and/or the Teenage Mutant Ninja Turtles, order a pizza and enjoy.

Editor’s Note: Batman vs Teenage Mutant Ninja Turtles is now available on Digital HD, Blu-ray and 4K. You can order your copy, and help support TBU in the process, by heading over to Amazon.