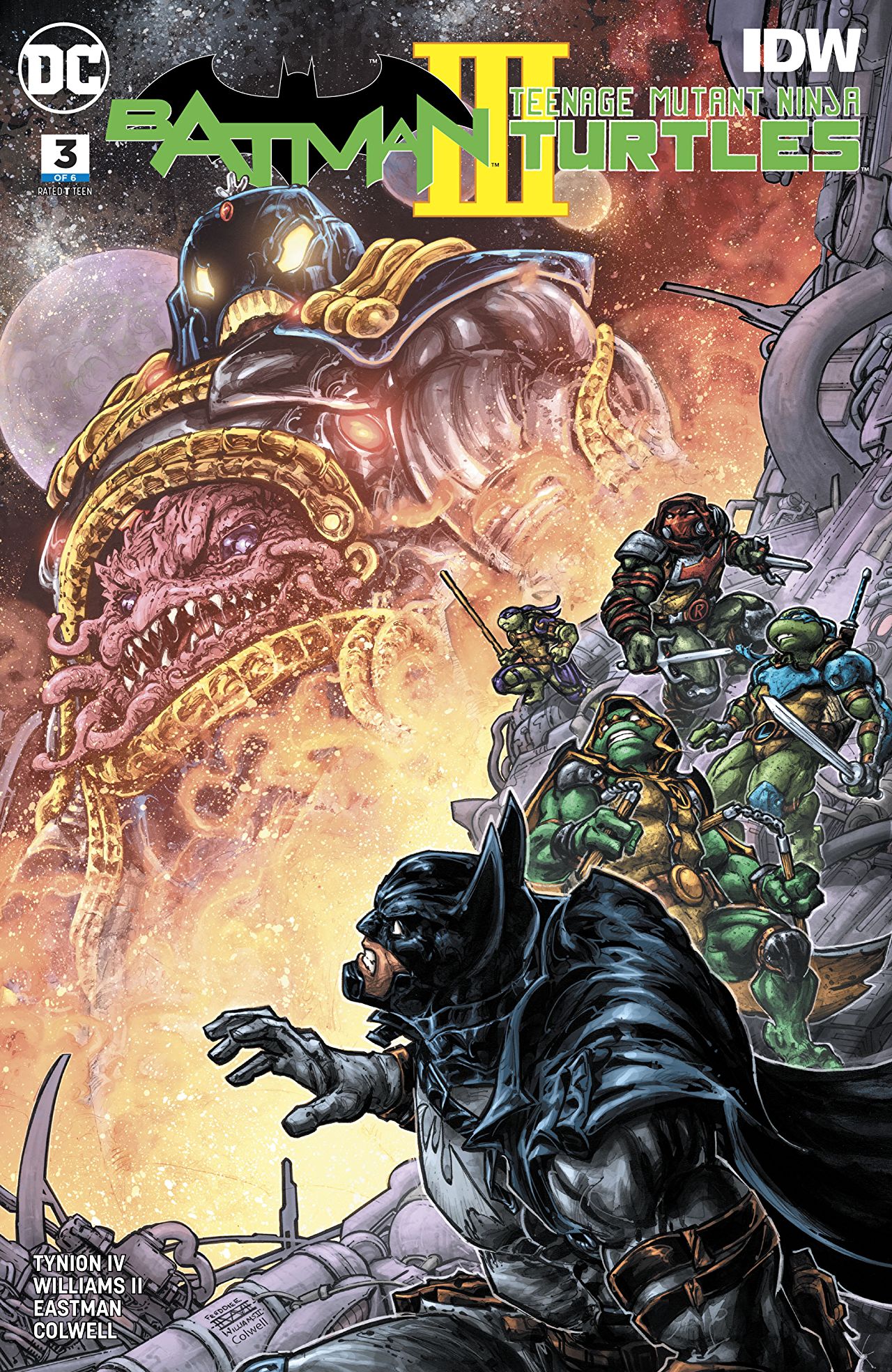 Overview: The Turtles and Batman get more in tune with their true histories as they both find old friends (and enemies!).

Synopsis (spoilers ahead): Bruce has a dream of his modified origin story.  Instead of Joe Chill murdering his parents in an alley, he remembers buying a bunch of turtles after seeing Zorro.  His parents are hit by a truck carrying the chemicals that would mutate the Turtles and Master Splinter.

In the present day, Bruce is having trouble accepting that his current life isn’t his true life.  Master Splinter tells him they all feel the truth of alternate reality Raphael’s words and encourages him to go seek the truth for himself.  While Bruce goes to find his truth, the Turtles create a plan to find April and remind her of her true past.  But before they can do that, alternate dimension Raphael insists that they change their masks.

Bruce arrives at an unkempt Wayne Manor to find an equally unkempt Alfred wielding a gun.  Alfred expresses shock that he is here and they embrace.  The embrace brings back all of Bruce’s true memories of the night in Crime Alley.  Alfred also says his memories are returning and they both open up the Batcave entrance and decide that they need to get into the fight.

Elsewhere, April O’Neil finishes her shift at work and is heading home when she’s ambushed by the Laughing Man and his Smile Clan.  The Turtles decide to swoop in and attack, but the Laughing Man is able to make alternate universe Raphael disappear using technology from Krang.  Before he disappears, alternate universe Raphael tells the Turtles that they need to find the real leader of the clan and restore it to being the Foot Clan.  The Laughing Man and his gang disappear saying that Krang has plans for them.  April tells them that she’s starting to remember them and that she thinks she knows where they have to go to next.

The Turtles pay a visit to Oroku Saki and tell him that in another time and place he was the Shredder.  He asks what they want from him and they respond by saying they need his help.

Analysis: This issue feels more like a “bridge” issue that connects what has happened with what is yet to come.  Not too much happens in terms of story, it’s mostly just the characters all getting back in touch with who they should be.  One of the tough things for this issue to navigate is the fact that the reader already knows exactly who the characters should be so there isn’t as much suspense here as there was in previous issues.  That being said, the characters are all treated with love by the creative team who clearly values them and their stories.  I just wonder if it was worth it spending seven pages on Batman’s modified origins when that moment would be reset later on in the same issue.  It was very creative and the conversation with Master Splinter was touching, but the pacing just seemed a little off.

This issue also sees the introduction of two major characters in the Turtles stories with April O’Neil and Shredder making their first appearances.  April seems set to be a member of the team as usual, but the Turtles are in an interesting position where they may have to team up with Shredder to restore order.  Given the fact that part of the amalgamation composing the Laughing Man is the Joker, I wonder if Batman will have to make a similar choice at some point?  I guess we will just have to find out in the following issues.

I continue to really enjoy Freddie Williams and Jeremy Colwell’s art because of how unique it is in comics.  All the characters are exaggerated in terms of musculature and stature but not in an obscene way.  It’s done in a way where they jump off the page as the larger than life figures that they are. The coloring and shading are unique in that it has a specific “texture” that I haven’t really seen anywhere else.  My favorite page in the issue is where Bruce is remembering his own history and we see his steely-eyed and determined glare right above an image of a bat breaking through the window.  It’s such a small and simple panel but it says so much about Bruce and Batman’s personality.

Final Thoughts: If you’ve been following this story, you’ll want to pick up this issue to keep up with what is happening.  But it does feel like this issue is a deep breath before all hell breaks loose.