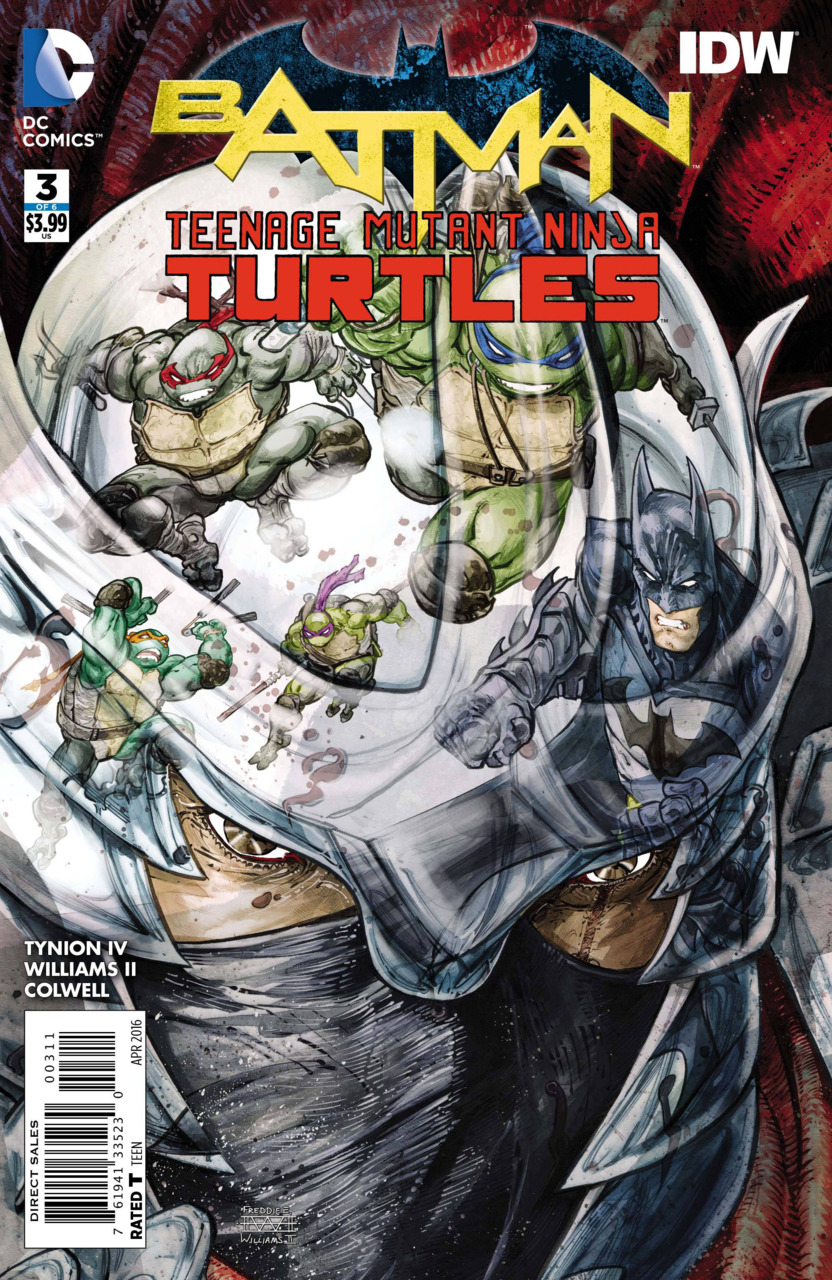 At the Iceberg Lounge, Shredder and Penguin are busy discussing their plans to return the former to his dimension. However, Shredder drops the news that he plans on ruling Gotham City and New York once the dimensional portal is complete. As the Foot Soldiers return with Doctor Khan, a smoke bomb drops from nowhere…Batman and his new allies the Ninja Turtles begin their attack.

As we flashback several hours, Bruce is busy studying a virtual map of Gotham City – searching for the Turtles. Approached by Alfred, a sudden alarm alerts the duo to intruders within the Batcave. Below, Michelangelo is busy riding the giant T-Rex as Donatello falls in love with the Bat-computer. Meanwhile, Leonardo and Raphael are arguing over how crazy a man who dresses liked a bat must be…when Batman himself appears above them. Throwing Raphael into the batmobile, Batman demands to know how the Turtles entered the Batcave. Speaking with Splinter, Batman is given a brief history of the Turtles, the mutagen that changed them and their battles against Shredder and the Foot Clan.

A sudden alarm sounds as Alfred enters wielding a shotgun, but he is told to stand down by Batman. Realizing who their true enemy is, Batman informs his allies that Shredder has allied with Penguin and is set to return home.

Cutting back to the present, our heroes are deep in battle against the Foot…however; Shredder realizes his near defeat and blows up the portal before it can be acquired by the Turtles. In anger, Raphael attacks Shredder but is severely wounded as the villain escapes. As the Turtles and Batman set to leave to save Raphael’s life, Shredder climbs aboard his fleeing helicopter. The issue ends with Shredder realizing his vehicle has been taken over by a different ninja clan…that of the League of Assassins, and their leader Ra’s Al Ghul.

I honestly can’t see this series ever being bad. Each issue consistently brings are heroes together and keeps the reader interested as Batman and Turtles take on the forces of Shredder and the Foot.

I liked how this issue started with our heroes taking on the Foot Clan and then jumping into a flashback showing how they finally put aside their differences. Tynion’s writing is very good in this story as we see some great moments of each of the turtles in the Batcave…especially Raphael’s hesitation to trust a crazy man who dresses like a bat.

Of course, Shredder ends up destroying the portal and escaping while injuring Raphael. And who shows up in the helicopter than one of Batman’s greatest enemies – Ra’s al Ghul. I think it’s very interesting two put these two villains together as they are both extremely deadly fighters with backgrounds in ninja/assassin cultures. It could have been easy to put the Joker into this story alongside Shredder, but I think it makes more sense to throw in the Demon’s Head.

I’m a little interested in what Ra’s’ ultimate goal will be…where Shredder wants to rule both worlds, Ra’s only tries to destroy everything to recreate it.

Definitely looking forward to next month as Batman and the Turtles continue to battle the forces of evil.