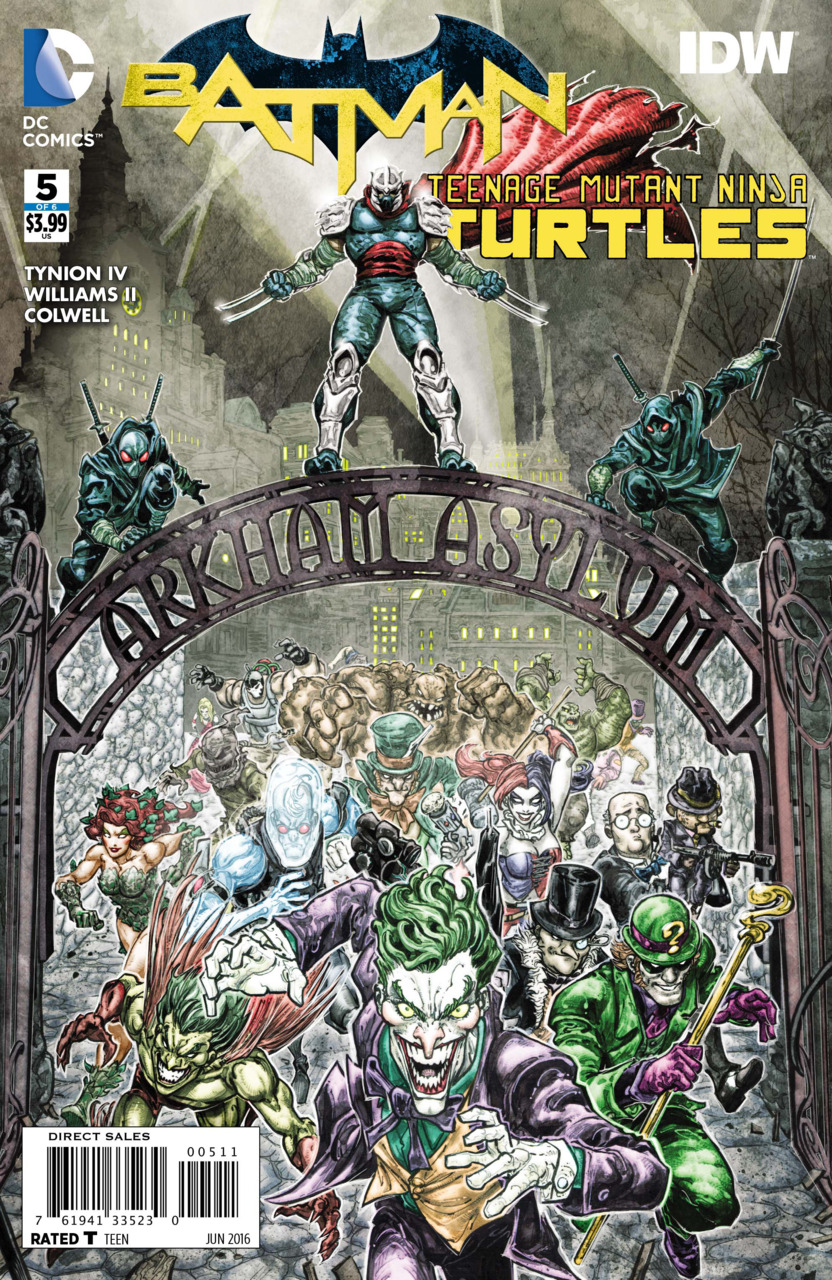 The issue opens atop Gotham City Police headquarters where the bat-signal shines into the sky and Commissioner James Gordon stands waiting for the Dark Knight detective. Appearing before Gordon, Batman introduces Leonardo and Raphael while the Commissioner briefs Batman at the events at Arkham Aslyum. Finding Jeremiah Arkham pinned to the front gates, Gordon reveals that the Foot Clan is now in control of the Asylum. Stepping from the shadows, the Penguin reveals himself as an informant and talks about the Shredder’s plan for Gotham…as well that he has allied himself with Ra’s Al Ghul and the League of Assassins.

Swinging off into the night, the trio goes to meet the batmobile and collect Donatello and Michelangelo from the Batcave…however, Leo begins to suffer from the mutagen withdrawal and the heroes realize that the turtles will need to return to their own reality quickly.

Back in the cave, Mikey and Donnie are busy playing video games as Casey Jones comments about the giant T-Rex in the Batcave. Casey urges the turtles to return home but they are interrupted with the arrival of Boy Wonder – Damian Wayne. Leaping to the ground, Robin engages the two turtles after knocking Casey to the ground. Holding his own against the turtles, Damian is only halted by the arrival of his father. Rushing to the aide of Leonardo, Alfred and Splinter look after the fallen warrior as Casey explains how their friend Harold (an ally scientist from their dimension) had explained the symptoms of the mutagen transformation. Revealing a “sling-shot” device tied into the portal back home, the group comes to the decision that the turtles, Splinter and Casey will go home while Batman and Robin will take on the Shredder and the League. Informing Batman not to underestimate the Shredder, Splinter bids goodbye to the Batman.

After a brief departure scene in which the turtles thank the Caped Crusader, Alfred suggests using the “Intimidator Suit” but Bruce states into hasn’t been perfected yet. Departing in the batwing, Batman and Robin arrive at Arkham where they are greeted by the Penguin who stands (again) in the shadows. Revealing that Shredder discovered his treachery, Penguin states that he mutated the Arkham inmates in order to “push the city over the edge.” The issue closes as the Deadly Mutant Arkham Inmates descend upon the waiting Dynamic Duo.

Another great issue by Tynion and Williams! I can definitely see the build up towards their final issue next month and cannot wait to see what they have in store for us…it’s definitely going to be a letdown not having this series as an ongoing that we get every month.

I have really enjoyed this Batman/TMNT crossover…the writing has been truly exceptional with great nods to the fans of both Batman and the Turtles themselves. I feel that Tynion has done an excellent job at tying his story into the world of the Ninja Turtles as well as Batman himself.

This issue is basically a setup story that leads into the final issue next month…however it was anything but boring. I never realized that a fight scene between Damian and the turtles was something I wanted to see, but was truly thankful that it was in this issue. I loved that Robin was completely distrusting of the “intruders” and was nearly about to defeat them before Batman arrived. Showed just how much of a capable fighter Damian really is.

We also get to finally see that ramifications of remaining in Gotham City…Leonardo finally begins to succumb to the mutagen change within in him and the rest of the turtles agree to return home. However, we all know that they won’t just peacefully leave without a massive battle between Shredder and the League. I think that the Intimidator Suit shown off by Alfred will allow Leonardo to join the fight alongside his brothers.

Finally, I really liked the mutations chosen by Williams from the Arkham inmates. We have a few obvious ones such as Scarecrow being a crow, and Penguin being a penguin. But I liked the full roster of animals used and am looking forward to seeing Batman and Robin take out their foes:

After seeing this final panel, I would definitely be down for a Deadly Mutant Arkham Inmates television show.

Great book, and am excited (and a little sad) for the final issue next month.