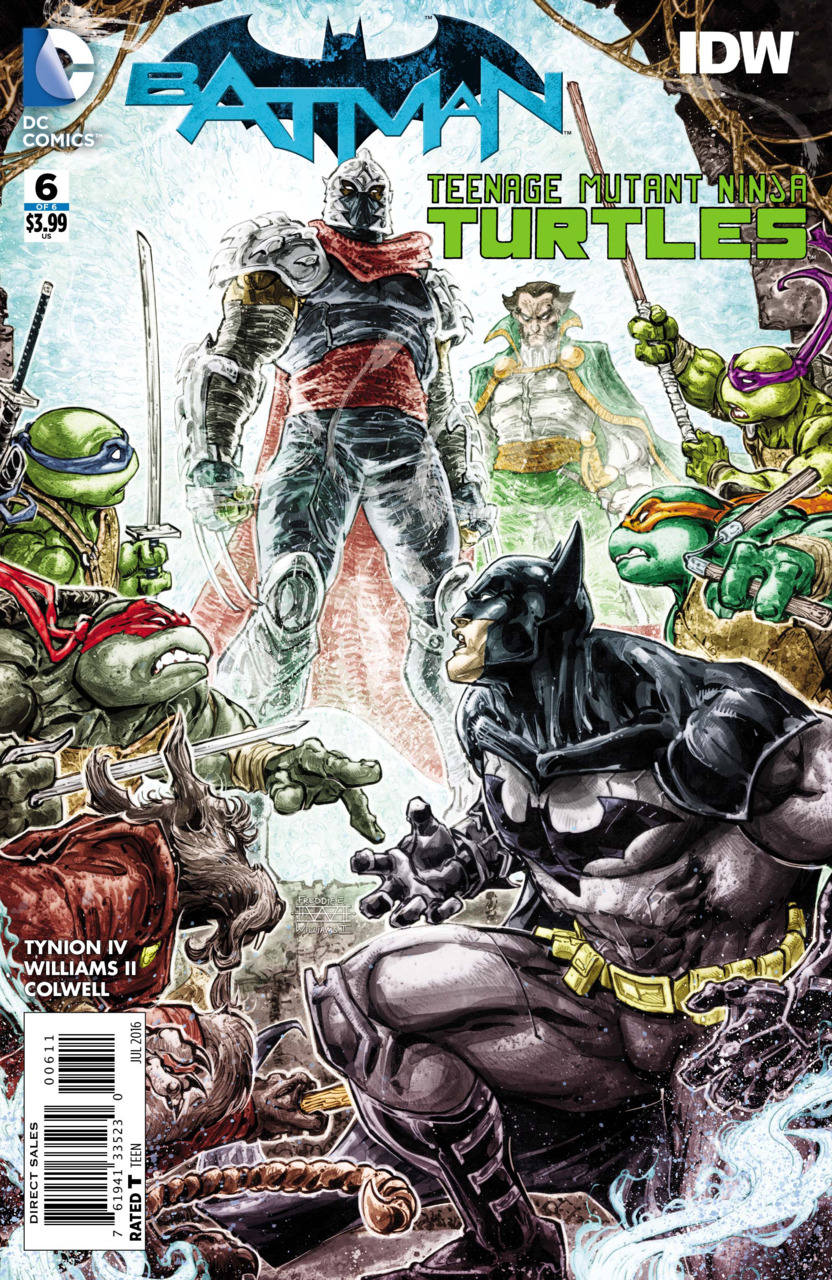 As the final issue of the mini-series opens, an elephantine-Bane is busy choking the life out of Batman and Robin as the remainder of the now mutant villains look on. Hurling a trio of electrically charged batarangs, the duo manages to break free of Bane’s grasp. Engaging the remainder of the villains, Robin sends a hyena-Harley flying with a kick to the face as Batman battles against the praying mantis-Ivy.

Back in the Batcave, several alarms are sounding as Alfred looks on at the chaos erupting at Arkham Asylum. Feeling guilty for ditching Batman and fleeing back home, the Turtles argue over whether to remain behind as Casey points out that they could lose their lives by staying. As the portal begins to open, the Turtles must decide a course of action.

Cutting to Arkham, Batman is frozen in ice by the polar bear-Freeze. Attempting to free him, Batman tells Damian to stop the mutant villains from escaping the facility. Rushing off, Robin leaves his father behind as Shredder and Ra’s Al Ghul appear above him. As Batman attempts to tell Ra’s that Shredder is ready to betray him, the Demon’s Head announces that both the Foot Clan and League of Assassins have joined together as one – together they will conquer the world. Allowing the cobra-Joker to make the final kill against Batman, the villains are interrupted with the timely arrival of four teenage, mutant, ninja turtles. Quickly freeing their friend, the heroes launch into battle against their many assembled foes. Donatello quickly tells Batman that they’ve brought something to help him, the Turtles engage the mutants. Leaping down between Shredder and Ra’s, Batman (now wearing the Intimidator Suit complete with four colorful bat symbols – blue, red, purple and orange) engages Shredder as Leonardo and his brother take on Ra’s Al Ghul.

As a massive battle erupts inside Arkham, the Turtles manage to take down the Demon with a quadruple kick. Meanwhile, Shredder and Batman viciously attack one another. Succeeding in knocking of his helmet, Splinter leaps in and delivers a knock-out blow to Shredder. As Ra’s is about to order his assassins to overwhelm the asylum, Robin appears and announces that he has incapacitated his men and led the GCPD to their locations.

A portal suddenly opens and Casey Jones and April O’Neil arrive on the scene. April informs everyone that when Casey returned without the Turtles, she and Harold got to work at opening up the portal once again. Bidding their final farewells, the Turtles and their allies (along with a captured Shredder and a plethora of Foot Soldiers) return back to their own dimension…however, Raphael lingers behind to thank Batman for his help and tell him that he may have lost his family, but he now has a good one…and another if they ever happen to cross paths again. Passing on his red bandana, Raphael departs through the portal.

As the issue comes to a close, Batman and Robin are once again in the Batcave talking to a holographic projection of Commissioner Gordon. Informing them that ARGUS has arrived and begun a cure for the mutated villains, Robin begins to make his exit…stating that he knows his father always likes his solitude to commemorate the anniversary of his parents’ death. Telling Damian that he’d like him to stay, Alfred suggests they watch some old family videos of “young Master Bruce waddling around in his pre-costume days.” However Damian comments that he was impressed with the Intimidator Suit…despite its obvious flaws. He suggests that they go over the schematics together…and Batman agrees.

Well, I am definitely sad that this is the final issue of this mini-series…but what a ride it has been! Although I can definitely admit that my opinion is a little biased when it came to the merging of my childhood in the form of Batman and the Ninja Turtles, I was really impressed by the story that Tynion came up with as well as the art style of Williams – a perfect mesh of the current ongoing art seen in the many Batman titles from DC, and the ongoing TMNT title from IDW. Also, if I haven’t mentioned before, Williams’ covers for this series have been particularly awesome!

From this particular issue, it was nice to see an awesome battle sequence that took up most of the pages…and I liked the villain swap – Batman fighting Shredder and the Turtles taking on Ra’s Al Ghul. The Shredder-Batman battle was particularly well done and I liked the splash page used to showcase these two deadly fighters going at one another.

I did think that it was a bit of a week story point to have Casey and April show up almost magically at the very end, even though it was stressed that they probably wouldn’t be able to get the portal back open again. A very deus ex machina moment if there ever was one…but I guess the Turtles and co. would have had to get back to their own dimension somehow.

I also liked the Intimidator Suit used by Batman, however had thought that this might have been used by Leonardo…he was pretty weak in the last issue and somehow managed to come around strong enough to battle against a bunch of bad guys.

Overall I would probably give this series a very strong 4 out of 5 batarangs, with a few marks taken off for the above issues I mentioned for the final issue of the series. I highly commend both Tynion and Williams for the excellent job done and hope to see a sequel that brings Batman back together with the Teenage Mutant Ninja Turtles.