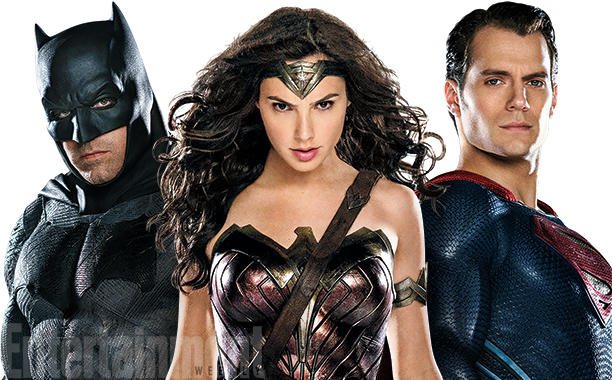 Not only did they reveal the cover to this week’s issue, but they also revealed six stills from the film.

As you read through the article, which may or may not be the full article that will be found in the magazine there are a couple of newsworthy points.

On how the original idea was pitched for both Batman and Superman to appear in the film:

Zack Snyder recalls the first time he pitched the idea, in a meeting with franchise co-captains Christopher Nolan and David S. Goyer, it was only meant as an Easter egg. “I said, ‘What about at the end of the movie we do a scene where there’s a crate full of kryptonite delivered to Wayne Manor,’” says Snyder. “Everyone was like…‘Okaay.’ Once you say it out loud it’s a problem because you can’t unsay it.”

On the type of Batman Affleck will play:

Ben Affleck plays an older, wearier Caped Crusader, one drawn at least in part from Frank Miller’s The Dark Knight Returns. “He’s on the verge of being swallowed up by the anger and the rage that we see haunt this character in the other manifestations of it,” says Affleck. “But this guy is further down the line and has become more embittered and cynical.” Worried that Superman’s unequaled power makes him more of a potential fascistic overlord than the hero we need, he makes it his duty to take him out of the sky for good.

On how Batman can face Superman in the suit shown in the trailer:

Batman outfits himself with a reinforced mech-suit equipped with strength-augmenting armor and, yes, kryptonite. The design resembles the one used for the confrontation between these two in Frank Miller’s The Dark Knight Returns.

As news continues to trickle down for Batman v Superman, keep it tuned in here for all the latest news as we head into Comic Con next week.