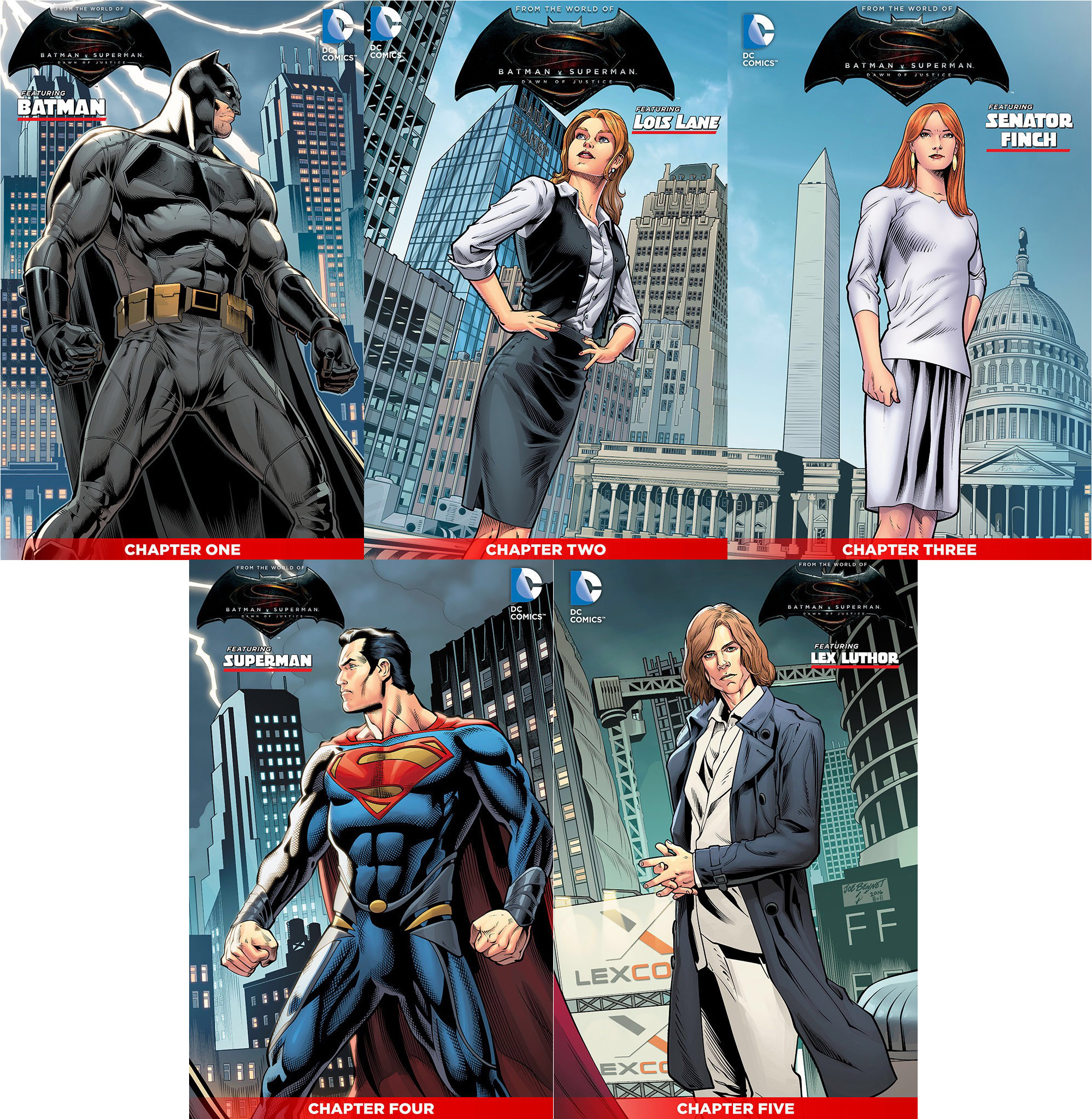 One of the fun things about major media event films is the tie-in material that gives the fan hankering for more stories in the universe capturing their imagination. The last three major films produced by Warner Brothers from DC Comics properties – The Dark Knight Rises, Green Lantern, and Man of Steel – had minimal tie-in books or comics. For Batman v Superman: Dawn of Justice, DC decided to give an extra push, producing a kid’s prequel novel and ten comic books leading into the film. This review will cover summaries, the creative teams, how these comics were distributed, how they connect to the film and each other, and our analysis of each one.

Summary (Spoilers): As a TV news program reports on Superman’s exploits, Batman trains. He talks to Alfred about the public perception of the two heroes, says that Superman doesn’t have to work (possibly ironically, given Bruce’s inherited billions). The news report begins interviewing people about the Man of Steel, mostly showing him in a positive light, some of the interviewees seeing him in Messianic terms. However, one is worried that Superman doesn’t understand what it means to be human, and the consequences of his actions on other people.

The comic then switches to a montage with the news reporting monologuing about the meaning of heroism, as Batman stops a gang of militarized criminals and Superman stops a disaster in space. The Superman statue is unveiled, but Superman doesn’t show up at the ceremony. Batman, injured in his fight, goes back to Alfred, and while the news report indicates that most humans accept Superman, Batman is darkly preparing for what Bruce sees as the inevitable betrayal.

In Depth: This comic is a digital only (through DC’s digital comics platform) piece obtained by buying specially marked packages of Doritos chips at Walmart stores. It was written by Christos Gage, primarily known for his work on the Buffy and Angel comics for Dark Horse, and Avengers Academy for Marvel, though he has done a couple of spin off or fill in projects for DC. Joe Bennett, veteran DC artist for such projects as 52, the Arrow television digital comic, Checkmate with Greg Rucka, and Birds of Prey with Gail Simone, provides pencils. These two produced six of the ten comics created for the film, giving them the most influence on this mini expanded universe narrative. Their pedigree also sets these comics apart from most tie-in work of this nature – they both are recognizable names who have worked on major properties before, instead of being fairly interchangeable fill-in artists and writers.

Most of the reviews for Gage and Bennett’s work are fairly positive. However, in general, most of their comics are pretty typical for film tie-in work – which is to say, they don’t really tell their own story so much as set up things for the main film. This comic is no exception, showing Batman’s mistrustful attitude towards Superman, as well as giving a tiny backstory for the statue of Superman that plays a prominent role early in the movie. Playing into these lowered expectations is the cover, also by Bennett, which shows Batman looking up at the Superman statue – not a terrible image, but it doesn’t provide a very striking contrast in colors between the two figures. However, it does present a fun idea of Batman not just confronting Superman, but the world’s perception of Superman.

The comic is presented in “normal” format, which is to say portrait orientation, with twenty-four pages of narrative content, though the panel count is a bit lower than “normal” comics (this one has about sixty-six panels, while most current comics have between 80-100 panels for about the same number of pages). Batman: In Gotham, Firefly and two thugs plan some arson. The younger thug is nervous about Batman. Firefly threatens to kill him, so the older thug calms him down, then tells the younger thug the history of Batman. At first, Batman was all about finesse, but since the events of Man of Steel, he’s become very brutal. One of the thugs jokes about an army of Batmen (possibly referencing the idea of Batman, Incorporated, or even the army of actors who have played the Caped Crusader), then Firefly tells them to get out. Batman attacks, beating Firefly with his tech and skills, then his terrifying stare makes the two thugs drop their guns. He leaves them for the cops after beating them a bit, and they wonder if anyone could stop him, as Lex Luthor watches the surveillance footage of Batman.

Lois Lane: Lois and Clark are flirting at the Daily Planet, as she heads off to interview Mr. Hanford, a businessman accused of trying to profit from Man of Steel’s final battle. He grows increasingly flustered as Lois slams him with more and more evidence, finally pulling a gun. Using her intelligence and a random police car driving past, she distracts him enough to use martial arts to take him down, having gotten her story. A week later, Lex has bought the company as part of his plan to learn about Superman.

Senator Finch: A simulation of a Kryptonian attack is being watched by Senator Finch and several military figures. Some senators point out Superman’s work in saving people, the military is too afraid to try to talk to Superman, though they note that he hasn’t interfered with politics yet. Many points are raised, and Senator Finch adopts a “I see both sides” approach, and creates a committee to study Superman. She then approaches the military to learn everything known about Superman.

Superman: Superman saves a runaway train, while news commentators discuss the difficulty of what he did, and the theological and political implications of someone with Superman’s power. Lex watches the show, clearly planning something evil.

Lex Luthor: Lex gives a speech in front of his destroyed tower in Metropolis, declaring his intention to rebuild even better. He plans to pour money and resources into the city after the attack, and news reporters tell him that other companies are following his lead, including Ted Kord’s company.  A news reporter compares Lex to Superman, and Lex darkly rejects the similarity. He tells Mercy that his whole life is now focused on learning more about Superman.

In Depth: These comics are also digital only, though they are more typical of what DC produces for its Digital First content – landscape layout, with twenty pages per issue, and a very low panel count (only one or two panels per page). Formatted to fit small horizontal screens like phones or mini tablets best, this format was also used for such series as Smallville Season 11, Injustice: Gods Among Us, and the Arrow, Flash, and Supergirl tie-in comics. Instead of being attached to Doritos chips, this time fans can access these comics by buying specially marked packages of Dr. Pepper soda products (which also come with pretty cool movie-art cans). Written and drawn by Gage and Bennett again, these comics all tie together, and even blend a bit with Upstairs Downstairs – the panel of Superman saving the train is used pretty much without alteration in that comic.

These comics seem to have gotten the most attention from critics leading up to the movie – and for understandable reasons. The most information about the characters and plot points are revealed in these comics, and the press interviews the actors did occasionally featured some of Bennett’s art in the background. However, like Gage and Bennett’s previous comic, each of these mini-stories is more concerned with setting up pieces of the film rather than telling a satisfying individual story. Even the fact that all five comics are tied together with the story of Lex Luthor secretly obtaining all the knowledge he can about Superman doesn’t really give a sense of satisfactory closure to the story – which works well as a marketing tool to get people hyped about the main event, but doesn’t give them much rereading value after you’ve seen the film itself.

A few things do stand out nicely. Firefly’s design is creepy and technologically cool – fitting in very well with Batman’s aesthetic. The covers are very nice full body shots of the character each issue focuses on, even though Lex’s rendering is probably the weakest and most inconsistent in the series.