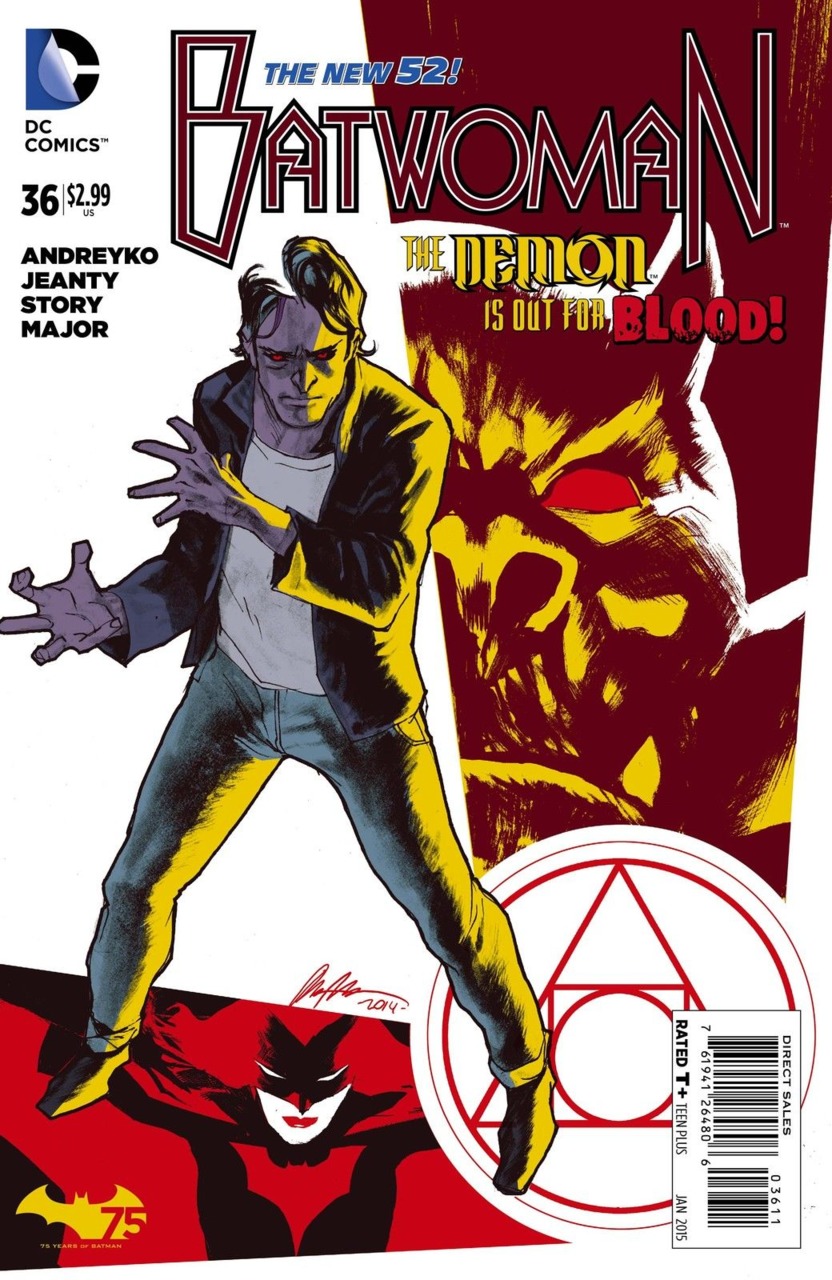 This issue opens with a pair of teenagers spray painting on a billboard and are quickly taken down by Batwoman…these images are also interspersed with an unknown woman who is tied up and surrounded by a cult. While fighting against the kids, Batwoman gets hit in the head with the spray paint can and comes out of some sort of trance…the kids run away as Batwoman wonders how she arrived at where she is, but he is quickly distracted by police sirens and springs off into the night.

Arriving at the location of the tied up of woman, Batwoman begins to examine several of the cultists who seemingly combusted under intense heat. Maggie Sawyer soon arrives on the scene and Kate attempts to talk to her, but is coldly ignored. Eventually the officers find a cultist who is still alive, and they rush him off to Gotham City Hospital.

The injured man arrives in the ER and is treated by Doctor Jason Blood, the burned man grabs Blood and he gets a stream of images involving demons. We then cut to Kate, who has arrived back home and is startled when her new girlfriend Nocturna shows up for a dinner date. They eventually go out and run into Kate’s former therapist and we discover that she has stopped going to therapy…Nocturna however brushes this off as she states that Kate is happy now.

The last few pages of the issue flash between several characters – Rory Regan is seen examining a medallion in his pawn shop (this medallion was shown at the beginning of the issue as a part of the cult ceremony); Alice arrives back in Gotham and is seemingly not as crazy as she used to be; Kate is in her apartment and has a strange memory flash of how she received the bite marks on her neck; finally we see Jason Blood arrive back home and jump into the shower after his shift…however a quick crash inside his apartment forces Blood to see what the noise is, and the issue closes with Blood coming face to face with Etrigan the Demon.

Okay, so this issue is definitely better than the last issue (I still have no idea how a group of heroes will end up fighting weird demons in space), but this is definitely still not up to par with previous storylines. I am definitely intrigued about where this will go, and I like how all of the supernatural type characters are going to come together…but everything else just isn’t meshing together too well.

First off, the whole relationship between Kate and Nocturna is plain weird. I feel like Andreyko is attempting to jump on the vampire band wagon…however that band wagon is long gone and truthfully was never that interesting. Secondly there is no clear course of where this storyline is going…I’m assuming it has something to do with the cult at the beginning of the story that all of a sudden burst into flames…but how that turns into “Batwoman in Space” is beyond me. Lastly, I am a little lost on the remaining characters: isn’t Jason Blood already Etrigan or did something change that I’m not aware of…granted I did not read “Demon Knights” so I could possibly have missed something in the New 52 continuity.

I’m hoping that some of the loose ends will start to get pulled together in the next issue, otherwise I’m a little disappointed in where this series is headed.