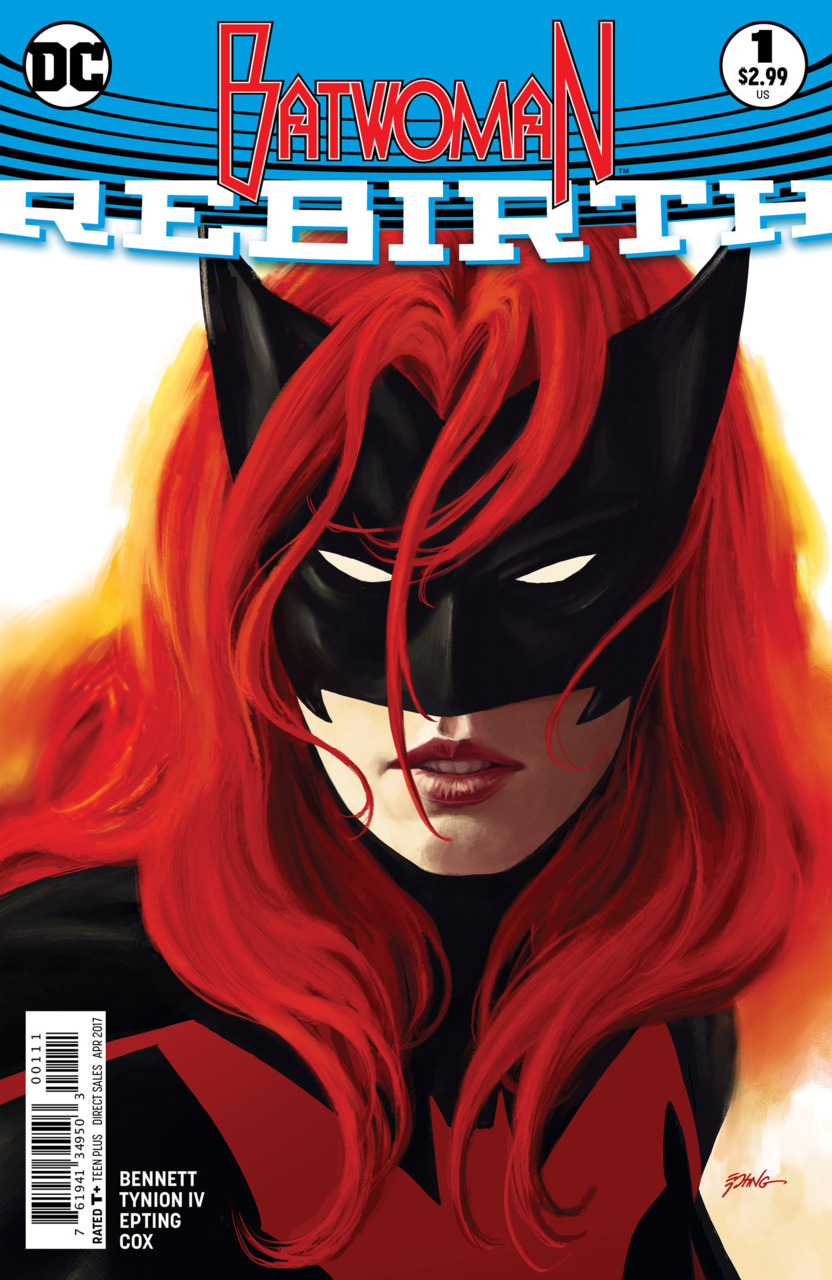 Batwoman: Rebirth is most assuredly a Rebirth title: it tells her origin story, sums up all of her significant previous story arcs and leaves a cliffhanger at the end for readers to come back. It starts with the kidnapping of Kate and her family by terrorists in Brussels, that ends up with both her mother and Beth, her twin, being killed. Forward in time, she is in military training and her dismissal from service for being gay. We then have some glimpses from the time she was lost, with no purpose in life other than existing.

After this, we get the first scene that is a new addition to Kate’s story, titled “The Lost Year”. The pacing slows down a bit, and we are introduced to a new character, Safiyah, with whom Kate is having an affair. Interesting fact, Safiyah is the name of one of Muhammad’s wives, and she was of Jewish origin. Kate Kane being Jewish herself, I wonder if the original Safiyah will influence this character in some way. The narration from that point on to the next page is made by Safiyah, who claims that Kate shall be trading “one self-destruction for another, until someone, something, sobers you up”.

Kate is back in Gotham, “After the Fall”, and resumes her life of drinking and parties. She meets Renee, and it is suggested in one of the panels that she is trading the self-destruction of alcohol for her relationship with Renee. The one thing that sobers Kate up though is meeting Batman. The pacing resumes its vertiginous speed with flashbacks to Kate’s training to become Batwoman. This is followed by a summary of Williams III’s run during the New 52 – and the issues following his leave seem to be left out – and a shot similar to the cover of Detective Comics: Rebirth.

Back to the present, Batman tells Batwoman that she will have to track the selling of Monster Venom on the black market. The final panel in this page connects with the next page: a compilation of people asking her where she is going, and if she is leaving. Stephanie is in there and I wonder if that was a slip from the editors, since she in no longer in the team.

The final page, entitled “Soon”, shows an older Kate Kane leading The Colony in what seems to be an attack on Gotham.

This issue was almost entirely made of flashbacks and retelling of her previous stories, and if you ask me it did feel like a little too much.  The pacing particularly suffered from how much information was crammed into it. I do understand this incarnation of Batwoman hasn’t been around for a long time, and probably the writers felt like the readers are not yet all that familiar with her, but the end result is so full of bits and pieces of information that it was confusing. This is not exactly the best strategy to get new readers since everything is so rushed that it feels like there is no real depth to the character.

As for the art, it was ok. If you consider the quality of the art that DC has been using in their Rebirth titles, Steve Epting’s and Jeremy Cox’s work is leagues behind. The drawings look stiff in moments when they should be dynamic, and the color is a little flat, which is not a problem in itself, but Epting’s drawing style asks for more shaded coloring.

Overall, this issue is good for those looking for a fast way to get acquainted with Batwoman’s background, but I do feel that it is not really essential for the plot to come.