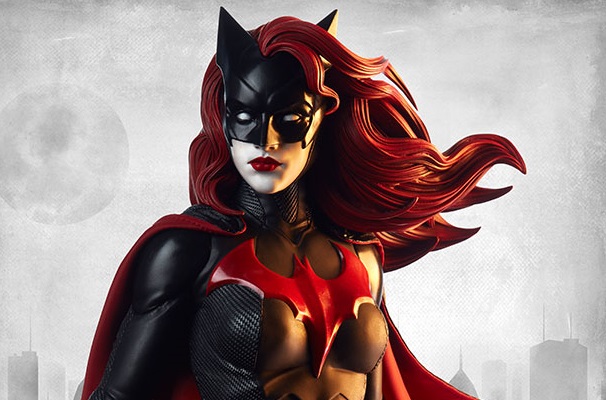 During the CW Upfronts last spring, “Arrow” star Stephen Amell announced that Batwoman would be making her debut during the third annual CW “Arrowverse” crossover event. It was also recently announced that the CW is developing a full-blown series to showcase her.

While Kate Kane hasn’t been cast yet, it is reported that Warner Brothers is looked for an out lesbian actress to add authenticity. During San Diego Comic-Con, Warner Brothers released a video teasing Kate’s upcoming “Arrowverse” debut.

Although there isn’t much to report yet, that didn’t stop Batwoman from stealing the show during the Comic-Con media sessions for “Arrow” and “Legends of Tomorrow” on July 21.

James Bamford, stunt coordinator and director, gushed over the promo. “We did have the announcement of Batwoman”, he said when asked about the upcoming crossover. “Isn’t that cool,” he said noting the use of the comic images. “Whoever cut that together, it’s so cool,” Bamford said.

Bamford will be directing a portion of Batwoman’s debut. “I’ll be directing the crossover again this year. It will be episode 9, not episode 8 this year. So it will also be the midseason finale,” he said. When pushed for more details he said it was “Too soon,” a comment echoed by “Arrow” showrunner Beth Schwartz. Another reporter at the table asked Beth about WB’s desire to cast a real lesbian as Kate. “We’re definitely making sure inclusion is a big deal,” Schwartz replied.

Stephen Amell was a bit more tight-lipped. “Oliver’s interaction with Batwoman is not the interaction in the crossover I’m most interested in,” he said. “Then again, I have to get out of prison,” he said noting his character’s current predicament.

If you’re looking forward to seeing the gang from “Legends of Tomorrow” interact with Kate Kane, you’ll be disappointed. “We’re not in the crossovers this year. Legends are not in them at all. We’re like doing our own thing,” said Caity Lotz (White Canary).

“Batgirl is cool,” Brandon Routh (Atom) added. Although he accidentally got the name wrong, he made some great points. “I think the more women heroines the better. They fill out our universe even more. The buzz from the internet seems [to be] excited. I think it’s a good move. Happy to have her be a part of the Arrowverse,” Routh continued.

Although we won’t be seeing Batwoman and White Canary/Sara Lance interact during the crossover, Lotz was asked if Batwoman could potentially cause complications in Sara’s love life. “Maybe, I don’t know. I feel like Ava and Sara, it’s more than a fling. Some hot chick in a bat costume isn’t going to just pull her away but you never know. I don’t know,” Lotz said.

How do you think Kate will fit in with the other Arrowverse heroes? Who would you like cast as her? Sound off in the comments below.