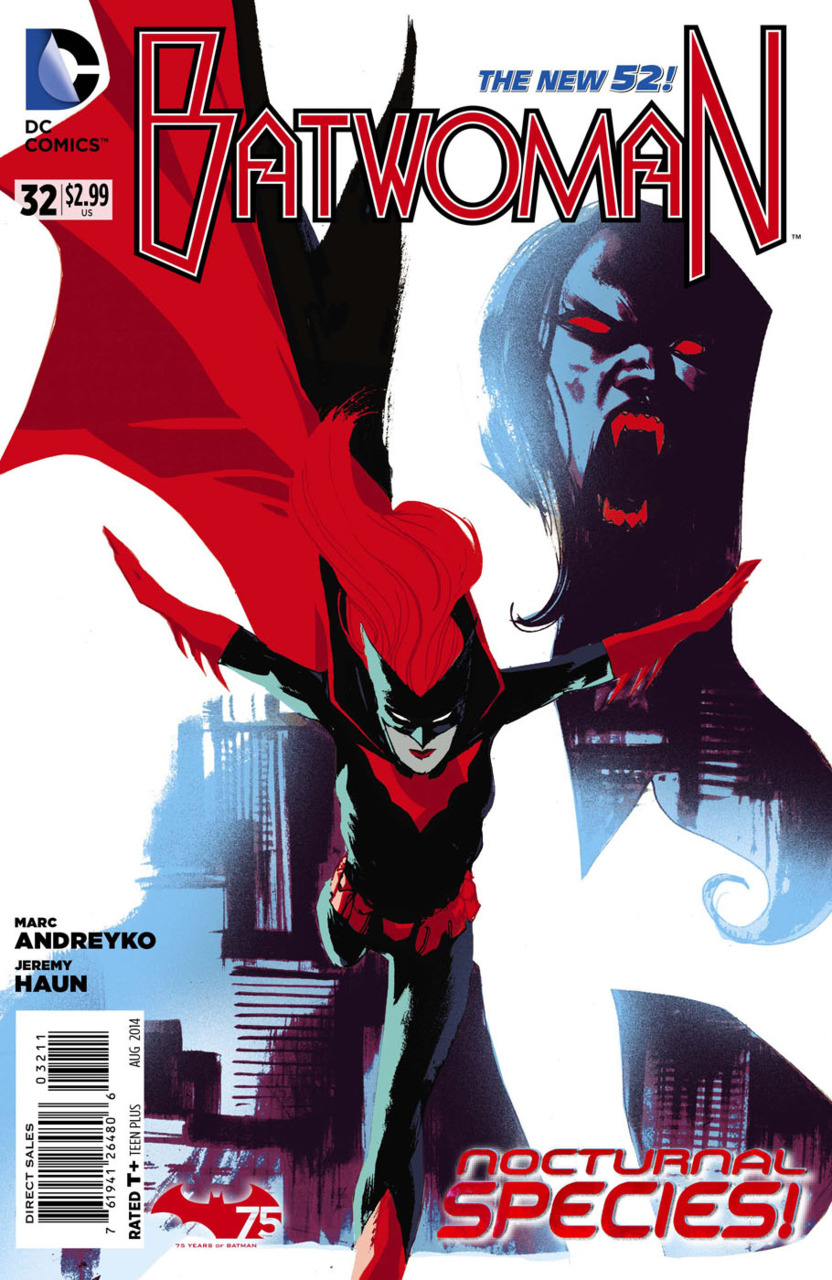 This cover… Gah! Rafael Albuquerque's art is so awesome. I LOVE white covers on comics, for some reason. Simple, elegant, scary. I wonder if the dude ever gets tired of drawing vampires…

Ok, so this is my first experience reading Batwoman, ever. And I'll have to say, I'm very impressed. Of course, I'll go back and read the Williams & Blackman stuff now, I have to. But Marc Andreyko seems to have a pretty good hold on who this character is. A lot of comics, these days, get caught up in a story arc, or something to that effect, but this keeps it character focused, which I enjoy. One thing that stood out to me, was the dialog. It's very natural, and stuff you generally don't get in a lot of stories, but you feel like you are sitting right there in front of two people having a conversation. There are also times where you see what Kate is thinking, as she is saying something completely different. Again, brilliant dialog, makes this a great read.

Jeremy Haun is on art along with Guy Major on colors, and they put out some great stuff. The only other time I've seen their work was on the villains month book for Riddler. I thought it was good then, but it's even better now. And they have so many opportunities to showcase their work on a book like this. Character moments, action scenes, supernatural elements all add to great stuff to come.

Kate and her cousin Bette are a a charity carnival talking about how Maggie is in Metropolis dealing with her ex, when Kate's ex, Sophie, surprisingly shows up. She is a colonel in the military, so it looks like she'll be seeing Kate often. Sophie is excited to see her, and wants to catch up, but Kate is uncomfortable, and takes off as soon as the opportunity presents itself.

We then see a Alex and Veronica talking about Natalie Mitternacht who has gone through four marriages, and is looking for husband number five. She's young, so she appears to be a 'gold digger', and Alex is suspicious of her killing her father, Natalie's most recent husband. Alex then takes a phone call from a labeled "Pest Control". More on that later…

Kate sees her psychiatrist to talk about Sophie, not knowing what her feelings are on the matter. She leaves soon after, to go out on patrol.

We then see Natalie, at her house, hitting on her step-son, Anton, who she seems to be in a relationship with. He doesn't like that she is looking for an older man to marry for his money, but he doesn't seem to have any, and gives it up. Natalie shows him a paper of a new exhibit at a museum, and they suit up, and go after it. Revealing that Natalie is a vampire.

Batwoman is frustrated that there is nothing to punch in the face, and checks her phone, wondering if Batman ever does this (probably not). She has two messages: one from her father, giving her an update on her sister, Beth, who is in the hospital, but is improving. The other is from Sophie, wanting to catch up over dinner. Kate then notices the museum, and comes across our vampire lady. They battle for awhile, and Kate seems to get the upper hand, when Anton comes to Natalie's rescue. They steal the artifact, and escape before the police show up.

We then see Alex, same girl from earlier, who is meeting with her "Pest Control", Killshot. And she points him towards Natalie.

Again, this was surprisingly good, and a decent jumping on point for this book. If you haven't been reading it, or dropped off because of the sudden creator change, I'd suggest you jump back on with this series. The character moments, dialog, and art make this book what it is. The supporting characters, and villains are complex, and layered. Making this stand out more than others.