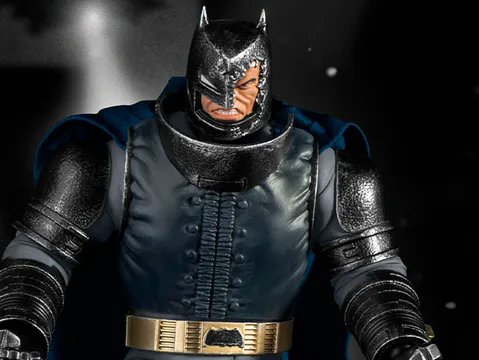 Beast Kingdom has released details for their latest DAH (Dynamic 8ction Heroes) figure, which features an armored version of Batman from Batman: The Dark Knight Returns. The one-ninth scale figure measures just over eight inches tall and features twenty points of articulation, interchangeable hands and heads, along with multiple accessories. It is priced at $114 and is expected to ship in January 2024. You can preorder the figure now at Entertainment Earth or Sideshow Collectibles.

Frank Miller’s classic Dark Knight returns was a graphic novel unlike anything seen before it! Winning immense praise and turning into a celebrated pop cultural phenomenon, it follows the story of an older Batman as he comes out of a ten-year retirement to save his beloved city!

As determined and headstrong as ever, the older, grizzled Batman uses all his immense wealth to build an armored suit, ready for his return to the mean streets of Gotham City!

The DAH (Dynamic 8action Heroes) range is back with a bang with the release of the ‘Armored Batman’ from the Dark Knight Returns. The suit, which was built to protect an older Batman is a perfect fit for the DAH design of highly articulable action figures. Batman’s strong body is complimented by the modular-like armor that sits on top. The set includes three exclusive head sculpts, with a full helmet, a partially damaged helmet, and a full Bruce Wayne head. Multiple replacement hands as well as a collection of weapons, including a pulse gun and special effects complete the set.

The perfect collector’s item for fans of the 80s classic comic book that shaped a generation. Order yours from an official Beast Kingdom outlet today!