Review: Batgirl and the Birds of Prey #13 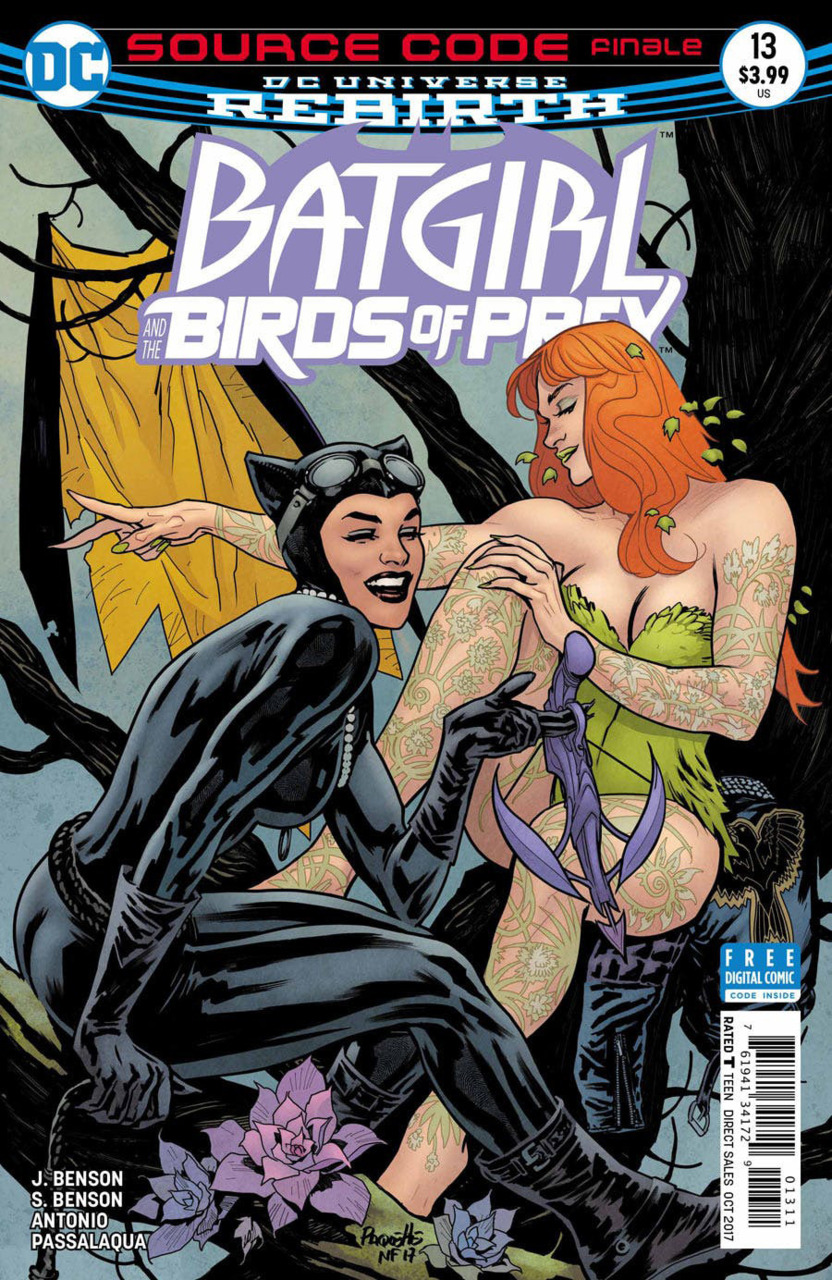 Overview: Poison Ivy’s rage threatens the Bird’s lives and mission in the conclusion of “Source Code.”

Synopsis (spoilers ahead): In the vents of Terracare, Batgirl, Catwoman, Calculator, and Gus (False Oracle, or Fauxricle as Black Canary dubbed him) bicker about who’s responsible for the mess they find themselves in. Exasperated, Catwoman drops the whole group on top of Ivy’s vines, and sulkily saves Batgirl from their grip.

Meanwhile, Huntress works to convince Ivy not to murder the whole company, learning that Ivy’s motivation stems from the death of bees by a secret ingredient in fertilizer from Terracare. She releases millions of bees to attack, but Batgirl manages to calm them down with a smoke grenade. Barbara then manages to convince Ivy that murder won’t make the world a better place, so she plans to change her body chemistry to control the bees instead of her normal power over plants. The Birds run interference between the security guards of Terracare and the bees, until she finally manages to send the bees away. The Birds live up to their promise to prosecute Terracare’s boss and restore Calculator’s family, while Catwoman takes a “finder’s fee” from Terracare’s vaults and Ivy and Huntress plan corporate takeover.

Suddenly, the Birds realize that Gus has slipped away. He texts them goodbye, but Calculator finds him and begins threatening Gus for betraying him. However, Babs uses her skills as the first (and best) Oracle to force Calculator to let Gus go, which he does while swearing to destroy his hated rival.

At the Bat Burger joint, last seen in “I Am Bane” hosting the actual Batman and all of his sons, Helena, Dinah, Ivy, and Selina enjoy various sandwiches and swap plans for the future. Babs, in the Clocktower, alerts them to trouble, and plans to run her old position as Oracle for the team.

Analysis: The Birds of Prey title historically struggles to keep artists. Though Ed Benes and Nicola Scott managed to hold on for a few years at a time, especially since its relaunch in 2010 and then the New 52 and Rebirth, no artists has really stuck around too long. Roge Antonio has put in a good run with the Bensons, from flashback fill-in work to full issues, but here we have a classic scheduling issue, with Breno Tamura finishing the final four pages of this issue. Sadly, even with the assistance, Antonio’s facial work suffers a bit – though Poison Ivy’s body on the sequence of pages from three to six is very well rendered, her face feels a bit awkwardly drawn, the use of simple shapes to heighten the appeal of Antonio’s style being pushed a bit further than usual. A similar thing occurs with Huntress, as Helena’s hair doesn’t add to her character as much as previously, often seeming more like an afterthought than the extension of her volatile personality it usually is. Tamura’s final pages, while perfectly acceptable, don’t mesh terribly well with Antonio’s stylization, and isn’t nearly as natural or dynamic in posing. The final page, where the Birds spring into action, proves stiff and implausible instead of the exciting feeling attempted.

Allen Passalaqua’s colors during the battle against Poison Ivy and other obstacles really highlight the impressionist feeling of the fight, using similar techniques to the 2003 Peter Pan film lighting scheme. Such technique serves a dual purpose, emphasizing the emotions and fear caused by such drastic happenings putting innocents like Calculator’s family in danger, as well as providing a backdrop that doesn’t need to be fully rendered so the characters don’t feel like they’re floating in space. Though we do get another coloring error mixing up Dinah and Babs’s hair color as Black Canary asks if Batgirl has any anti-goon bombs.

The Bensons wrap their long-time plot about Gus and the immediate threat of Poison Ivy up neatly, while leaving room for future conflicts. In keeping with their stated desire to build up the Birds’ collection of arch-nemeses, they bring back Calculator’s quest to destroy his rival Oracle with this arc. They also add to the Birds’ allies with Catwoman and Poison Ivy, bonding in the hilarious Bat Burger restaurant, continuing the writer’s love of tying their work into the wider DC world of history and character relationships. Catwoman’s voice, rather stilted and inconsistent over in the solo Batgirl title, was much better here, though the overly large and red goggles aren’t as stylish as Inaki Miranda’s work on her costume in the parallel book. Having Babs sit down as Oracle rather than needing to swing into action as Batgirl also promises more variety with the character than just a female Batman family member who is aimed at a younger demographic.

Next month, TBU welcomes new reviewer Gerry Green, who brings an incredible wealth of comics experience and enthusiasm. I hope you’ll join him as enthusiastically as I will when the Birds continue their daring adventures to save the good and bad people of Gotham!

Final Thoughts:  The saga of Fauxricle ends on a decent, if not book-shaking note.