Review: Batgirl and the Birds of Prey #14 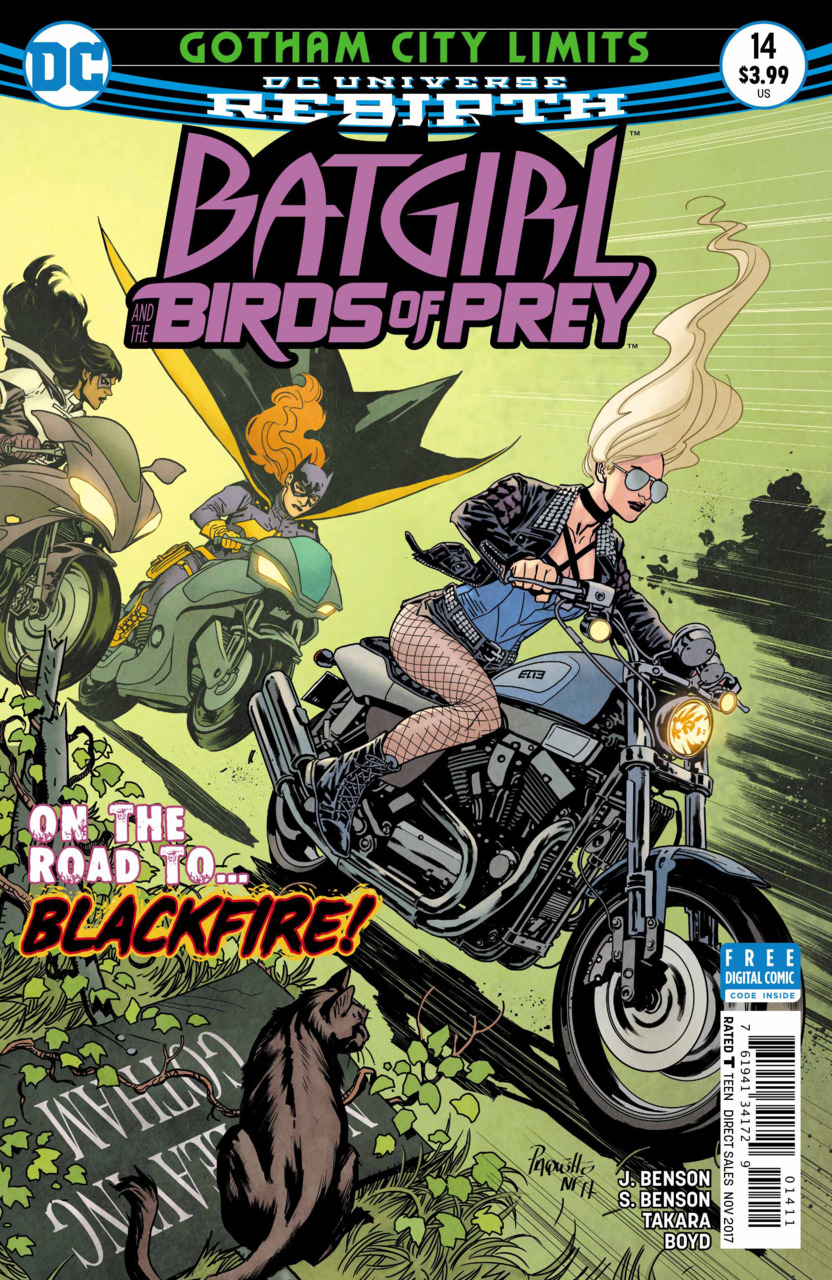 Overview: Helena and Dinah try to get a day away from battling strange baddies while Barbara holds down the fort in Gotham. It doesn’t work out like any of them expected.

Synopsis (spoilers ahead): Helena Bertinelli and Black Canary are on a school bus leaving Gotham on a school trip with Helena’s class. Dinah is recognized as the lead singer of Black Canary which makes the kids think more highly of ‘Ms. B’.  They go to a colonial era reconstruction of Gotham City. The class hears about the pre-colonial Shaman Blackfire who convinced the indigenous Miagani people to abandon the land because it was cursed. They also hear about the colonial era Deacon Blackfire who, thirty years before the Salem Witchcraft Trials, persecuted mostly females in an effort to eradicate witchcraft from Gotham.

With Huntress and Black Canary gone, Barbara Gordon is at the Clock Tower holding down the Gotham fort by herself. Using her tech skills she saves Batman, Batwoman, Cassandra, and Clayface from drowning in a Riddler-trap. This inspires her to take off her bunny slippers and pull on her Batgirl costume for an evening of crime fighting. She breaks up bank robberies, helps the elderly cross the street, and punches purse snatchers in the face. All in all, she has a good time until she tries to convince warring street gangs to stop their fighting. The gangs decide to turn on Batgirl who, luckily, has called in some backup: Catwoman and Poison Ivy! The three are able to subdue the two gangs without killing anyone. Ivy and Catwoman head back home to watch nature TV.

Helena and Black Canary are with the class around a campfire. Helena tells the kids a ghost story that Dick Grayson told her about Decon Blackfire, who was immortal and trapped in a cave by the Miagani. Colonial Gothamites, looking for shelter, unwittingly released Blackfire. That cave is in the woods they were camping in. After everyone goes to sleep some of the kids go searching for the cave. Helena realizes the kids aren’t in their sleeping bags and she and Dinah go in search for them. They find the kids in the cave and see that the spirit of Deacon Blackfire has possessed one of the kids. Huntress and Black Canary take on the immortal troublemaker and take his walking staff, which is the source of his power. Canary uses her cry to move the bolder that seals him in the cave. The pair convinces the kids that it was all an act, an educational experience.

As they sit around the campfire recounting the strange events they get some unexpected company: Barbara Gordon. Barbara has missed her two friends and the trio sits around the campfire under a full moon roasting marshmallows and enjoying each other’s company. The End.

Analysis: The plot points in this story by Julie and Shawna Benson, primarily serve to display the personalities and skills of the three Birds of Prey: Barbara Gordon (Batgirl), Helena Bertinelli (Huntress), and Dinah Lance (Black Canary). Barbara uses her technical skills to save Batman and her fighting skills to subdue Gotham crime. Helena is established with a stern personality, a teacher, and brutal fighter. Dinah is shown as personable, with amazing battle skills and her Canary Cry. The character and friendship of the three are front and center in this issue, though it is not without action. However, the stakes never feel very high. That isn’t a criticism of the book since it doesn’t seem to be primarily about the tale.

This issue embraces the legacy of the team. The comradery between the three come through loud and clear at the end of the story. That is why this issue works so well.

The art is by Marcio Takara, colors by Jordan Boyd, and letters by Josh Reed. All in all it works together. The style is simple, almost cartoony. But for this story, the approach is completely appropriate. Barbara, in particular, is seen as a red-headed, freckled faced spitfire that enjoys what she does. It is a perfect match for this portrayal. I did find the some of the shadow shading to distract the lines of the art, particularly on the character’s faces. However, during the scenes lit by fire it is used to good effect.

Since I am new to reviewing this title, I’d like folks to know my point of view about this book so you will know where my comments are coming from. Gail Simone’s Birds of Prey expanded what I thought of as good in a comic book plot and was a big influence in my embracing different kinds of stories. I had high hopes for this title when Rebirth launched and read the first issues. It didn’t grab me however, and after a few months I dropped it. A few months ago I heard the title had started to come into its own so I put it back on my pull list and have been enjoying it ever since.

Some things I particularly liked about this story:

Final Thoughts: Because the nature of this book is basically a one shot character tale, it is a perfect jump on point for new readers. If you have had any interest in any of these characters or like your super hero stories with strong interpersonal interaction, I recommend you take a look at Batgirl and the Birds of Prey series. Highly recommended.