Review: Batgirl and the Birds of Prey #16 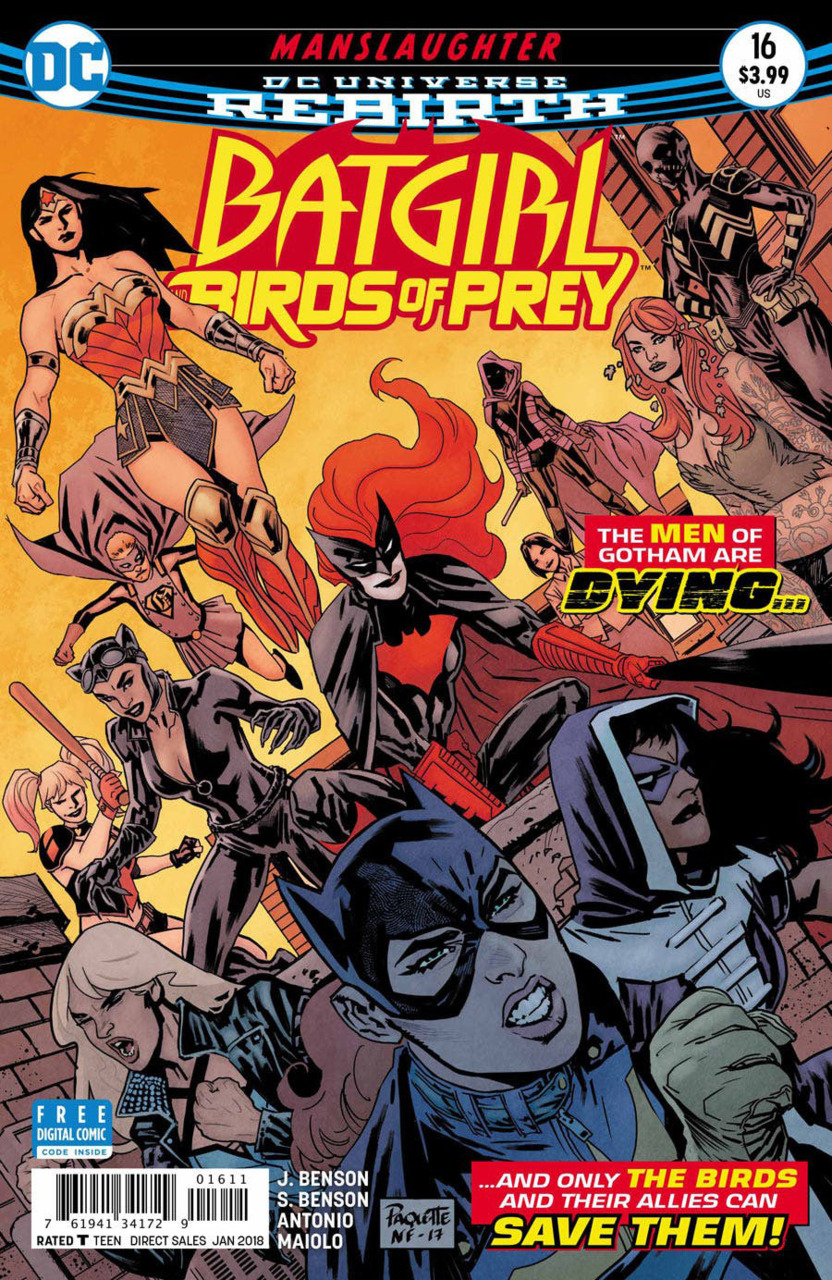 Overview: Who is behind the illness that has beset all the men in Gotham City? The female heroes of DC leap into action to protect their male friends and neighbors.

Synopsis: (spoilers ahead): Batgirl and the rest of the team welcome Wonder Woman to Gotham and are happy to have her help. They determine that if they can get a copy of the virus that caused all of Gotham’s men to become ill then Poison Ivy can develop an antidote. The team splits up to try to get to the bottom of the mystery.

Batwoman and Batgirl head to GCPD headquarters to talk with a suspect that Renee Montoya has in custody.

Wonder Woman heads to see Amanda Waller who tells her about a construction site that has had a collapse. WW heads over to the site to help out. The men that aren’t trapped by the collapse are sick, but trying to save their co-workers. Wonder Woman praises the men for their attempt and uses her Amazonian strength to free the men.

Oliver Queen is being wheeled into the emergency room with what he says is a broken wrist. Since he was out of town during the initial phase of the illness he hasn’t contracted the flu yet. A nurse attacks him with a syringe full of the virus but Harley Quinn’s bat comes between Ollie and the offending needle. As she and Ivy avert the threat, the nurse declares that they can never stop the Daughters of Gotham. Now that they have a sample of the virus Ivy can begin her work.

Batwoman heads to GCPD headquarters to interview Renee Montoya’s suspect. She had been captured wearing a plague mask. The prisoner says that she is one of the Daughters of Gotham who want to rid the city of the scourge of men.

The hospitals are full so the sick men are being brought to the Gotham Seaside Coliseum which is rapidly filling up. The team heads for City Hall to talk with Amanda Waller. They share what they have learned but a gang of the Daughters of Gotham have arrived, led by Gotham City Councilwoman Muir. They want to kill all of Gotham’s men so they can walk the streets without fear or be beholden to the judgment of men. The heroes fight the Daughters, but one of the gang members launches a gas attack which the plague masks are designed to protect them from.

The Daughters disappear but take Batgirl, Huntress, and Harley prisoner. The three are introduced to their leader, an elderly woman that the Daughters call Patient Zero and who wants to kill all of Gotham’s men!

Analysis: It can be tricky writing a pro-someone story without it turning out to be anti-someone else. Writers Julie Benson and Shawna Benson manage to give us a powerful pro-woman tale that is careful not to indulge in misandry. This story goes to show the depth that DC has in their female characters: the physically powerful leader Wonder Woman, the dangerous Amanda Waller, the brilliant Poison Ivy, the list goes on and on. These are characters with rich backgrounds and specific personalities several of which are given a chance to shine while they knock the Bechdel score out of the park. There isn’t a moment in this story where you will be missing a male hero. The ladies can take care of business just fine on their own, thank you very much.

Roge Antonio is the artist with Marcelo Maiolo on colors and Deron Bennett on letters. The lines and faces are fairly simple. Some facial features are merely suggested and luckily the hair and costumes make it easy to keep this large cast straight. There is some stirring artwork here, the title spread shows many of the heroes standing strong against the threat they face. They are a dangerous crew to be sure. I particularly liked the color work in this issue. Much of the art is in yellows and earth tones, but they are punctuated by vibrant violets and reds. These hot colors reflect the action that is going on in the scene. The impact of the strong colors isn’t over done, it is used very effectively.

Final Thoughts: I am very glad that I got back onto this title, this is a book I look forward to reading. I typically dislike big team up stories like this but the Bensons display a deft hand managing the character’s panel-time. Also, being a man, I appreciate things like Wonder Woman telling the sick men trying to help their comrades that they are heroes. The women’s connection to men is clear: Catwoman is in love with Bruce, Harley doesn’t look forward to a city without men, Ollie happily takes on a bit part as bait in the ladies’ plan to get a vial of the virus. While male transgressions aren’t glossed over, it is clear this story is about embracing not rejecting. It is a positive, entertaining tale that I look forward to reading more of. If it continues to be this good as the story progresses I will very likely begin to increase my rating for this. As it is right now, I’ll give it a solid rating, but look forward to giving it more.