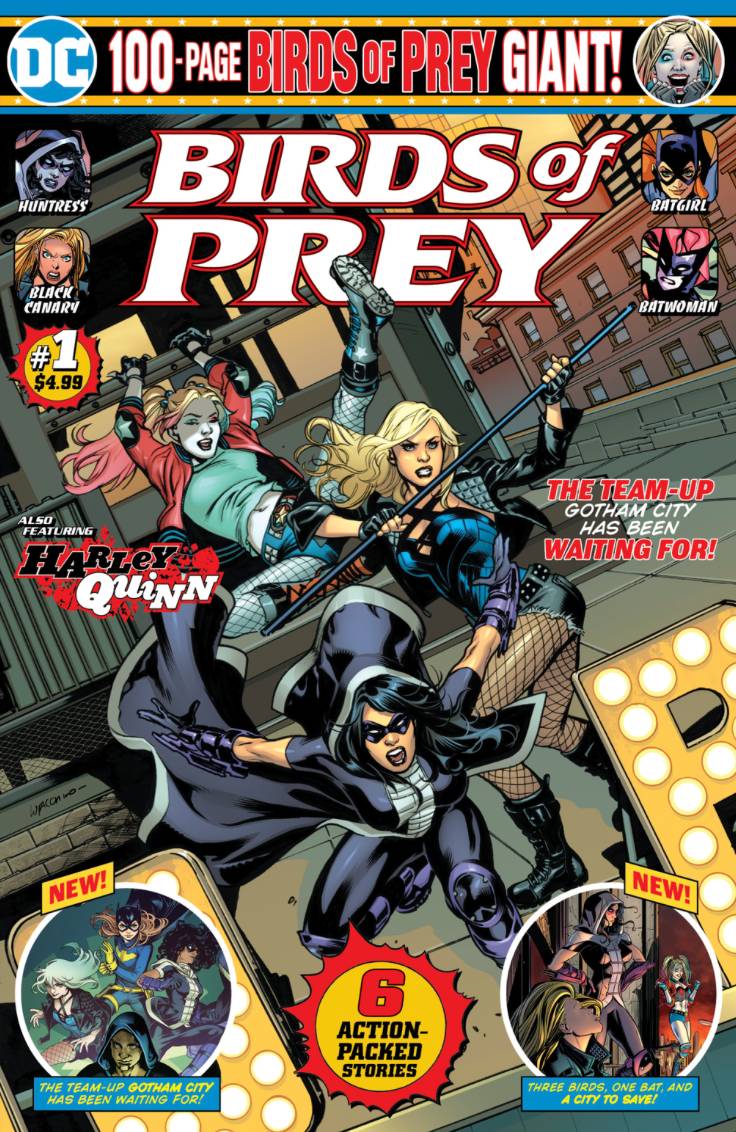 Overview: Three new tales of the Birds of Prey and Harley Quinn are told as well as three reprinted stories.

Editor’s Note: Due to the anthology nature of this collection, we will feature a synopsis for each of the three new original stories followed by a combined analysis for the entire issue. Spoilers are sure to be revealed.

Story #1: Harley Quinn and the Birds of Prey in “Fight or Flight” by writer Gail Simone and artist Inaki Miranda

Synopsis: In Gotham, wealthy businessman Anderson Vickers is building a hospital, but the construction site is swallowed by a huge sinkhole. Later, on a rooftop, Harley Quinn calls Huntress (Helena Bertinelli) and Black Canary (Dinah Lance), wanting to join the Birds of Prey by dangling a rumor about the sinkhole. Though Dinah and Helena are both hesitant, they agree to investigate with Harley. At the building site, Harley and Huntress leap right into punching the guards, which sets off the alarm. Helena recognizes some of the guards as mobsters (from her history as the daughter of a mafia leader), and Dinah uses her Canary Cry to break into the safe, finding out that the hospital is just a front…only to be interrupted by Poison Ivy. After the Birds knock Ivy out, they demand answers from Harley. More mob enforcers show up, and the four decide to team up once again. Harley manages to talk Ivy out of killing anyone, and the Birds discover that Vickers was using the hospital as part of a real estate scheme, which caused damage to Ivy’s beloved plants, leading to the chain of events that ended with Harley approaching the Birds.

Synopsis: Harley races through Gotham traffic to a cafe to meet a friend. Checking her reflection, we see that though drawn in her typical Harley costume, Harley has dressed as Harleen for this meeting. Her friend turns out to be a famous self-help book author and former classmate. Harley restrains herself from attacking all of the rude patrons of the cafe who come up or disturb their conversation. Her friend breaks down, saying she feels like a fraud, and Harley advises her to just be herself. She then proceeds to beat up all the rude people in the cafe. Afterward, Harley runs outside, throwing off her Harleen costume and dancing as Harley Quinn.

Story #3: Huntress in “The Killing” by writer John Layman and artist Cully Hamner

Synopsis: Huntress stands atop Gotham rooftops, declaring that a Russian mobster will die tonight. She takes out his security, but Deathstroke attacks her, since he is looking for credit for the contract. Huntress distracts Deathstroke long enough to start chasing the mobster, who takes cover in a safe room. Deathstroke claims “dibs,” but Huntress, having already rigged the room, blows it up. Deathstroke, angry, threatens her, then calms down and grants her the credit because of his own sense of honor. Huntress then tells the mobster to come out, having arranged this charade in advance to fake his death, allowing him to testify against the Russian mob. The mobster thanks her for helping him save his son, and she reflects that she’s glad she’s giving him a second chance.

Analysis: Released as part of the promotional push surrounding the forthcoming Birds of Prey film, this 100-page giant contains a lot of great pieces of talent but sadly never combines into a coherent whole puzzle. Gail Simone deserves a place in comic book history for her magnificent run on Birds of Prey (#56-108) – an incredible character-driven series that developed Oracle, Black Canary, and Huntress from minor beloved characters into mainstays of the DC Universe. Two years ago, Simone wrote a hilarious but also thoughtful and well-plotted comic, Catwoman/Tweety and Sylvester, which was a deeply enjoyable nod to her time on the Birds of Prey and was illustrated by Inaki Miranda, who also provides art for this sixteen-page story. However, unlike that story, this story is poorly paced, shallowly characterized, and extremely lacking in the invention and imagination that characterize Simone’s best work. In addition to being incredibly cliched, the “evil businessman” villain is a trope going back to her very first issue of Birds of Prey. At least in her first issue of Birds of Prey, this villain archetype had nuance and complications, but here, Anderson Vickers is a one-page cardboard cutout with zero motivation beyond mustache-twirling. The entire plot, instead of being revealed throughout the sixteen pages of the story, is dropped on the reader through really clunky expositional dialogue in the first and last pages. The rest of the story is taken up by really shallow characterizations of Dinah, Helena, Harley, and Ivy.

Ivy, in particular, is not the dangerous character, but deeply interesting one seen in stories like Greg Rucka’s New Gotham storyline. Instead, she’s cranky but misunderstood “heroine” of sorts, robbing her of any real depth. Harley is given a better sense of her past harm to others, but we’re invited to see her newfound growth as more impressive than Huntress and Canary’s years of hard-fought self-control and discipline. The hackneyed “our main characters misunderstand and spend a huge chunk of the story fighting with each other” middle section of the story does no character any favors, especially considering the horrifically mismanaged pacing. It very much feels like Simone had a twenty-page script written, but either there was not enough time for the art to be completed or some other factor, leading to the entire story feeling like half of itself. The half we got neither entertains nor satisfies fans hoping for more of her truly brilliant first run or even her flawed but still occasionally amazing second. Inaki Miranda’s art, though nowhere near the drastic collapse in detail found in “The Death of Oracle,” isn’t quite up to the incredibly enjoyable Catwoman/Tweety mashup.

The two other original shorts also leave a lot to be desired. Though Isaac Goodheart and Cully Hamner’s art is much more polished and assured than Miranda’s, each suffers from deep writing flaws. Robert Venditti’s Harley story was very poorly conceived, full of cliches, and confusingly executed. How in the world do the logistics of Harleen’s disguise work – Gotham City Sirens showed that Harley had to put in serious work with makeup and hair dye when she went out as Harleen, not something that can just be thrown off in a symbol of liberation. Not to mention the moral of “be yourself, especially if being yourself means violently assaulting people who are rude to you” provides no moral substances whatsoever.

The Huntress story was cleanest and prettiest in terms of art – Cully Hamner has worked with Greg Rucka on some really strong stories featuring Huntress before – The Question: Pipeline and Convergence: The Question, and his love for the character shows clearly here, despite her having a completely different design from the ones seen in his previous efforts. It is extremely odd seeing the current main-continuity design for Huntress on the cover and in these two original stories, but having her skin appear as it used to before she was re-created in the Grayson comic series as a black Sicilian woman – perhaps as a result of Mary Elizabeth Winstead’s casting? Seeing Christopher Priest and Carlo Pagulayan’s Deathstroke design, with its hexagonal golden sleeve armor is a delight, a reminder of the glories of that series – and John Layman’s script even gives Deathstroke a slight flavor of that series’ complexity. However, the general story is very generic and cliched, without the kind of nuance to the mafia background the Huntress brings in a Greg Rucka story, and the final line of the story really rings false, saying that Helena’s father, a mobster, wasn’t a bad man – despite the fact that nearly every iteration of his character has been brutal and abusive. Of course, this is a promotional comic aimed at kids, but specifically tying the story up with something that connects to no other Huntress appearance doesn’t make any sense except as a very cliched attempt at “depth.”

A pretty but still a shallow issue of Batgirl and the Birds of Prey #14 takes up another twenty pages, followed by a fairly mediocre Black Canary Band story from her DCYou run (and didn’t even have the Annie Wu art, the real star of that run), and a Harley short story written by Joelle Jones from the New Creator Showcase about Harley leading an Iraq War-style riot against Arkham…which was packed with bad cliches, stupid situations, flatter than pancake characters, and professional but generic art. The magazine has VERY strange ad choices. For a piece of promotion for an R-rated movie, this definitely selected the most kid-friendly stories and art, and a lot of the ads were for really young age products, too. Plus, a Green Lanterns and a ton of Wonder Woman (to fit with the “girl power”?) ads, but only the old Birds of Prey run, none of the new reprints for the movie, are advertised. It’s extremely confusing from a tie-in standpoint, though it does match the goal of the Walmart Giant program to be bought for kids in grocery stores. In terms of a kid-friendly introduction to the Birds, the Scooby-Doo team-up was a much better introduction.

Emanuela Lupacchino, artist for the upcoming Birds of Prey Black Label one-shot coming out in a few months, provides the comic store variant cover, depicting Harley, Canary, and Huntress in her trademarked smooth and gorgeous style. Yanick Paquette’s cover for the first issue of Batgirl and the Birds of Prey adorns the Walmart edition. Sadly, it’s not his best cover for that series and not even the cover for the issue of the series reprinted here.

Final Thoughts: A collection marred by too many missteps of characterization and craft, though often buoyed by lovely art.