Review: Batgirl and the Birds of Prey #2 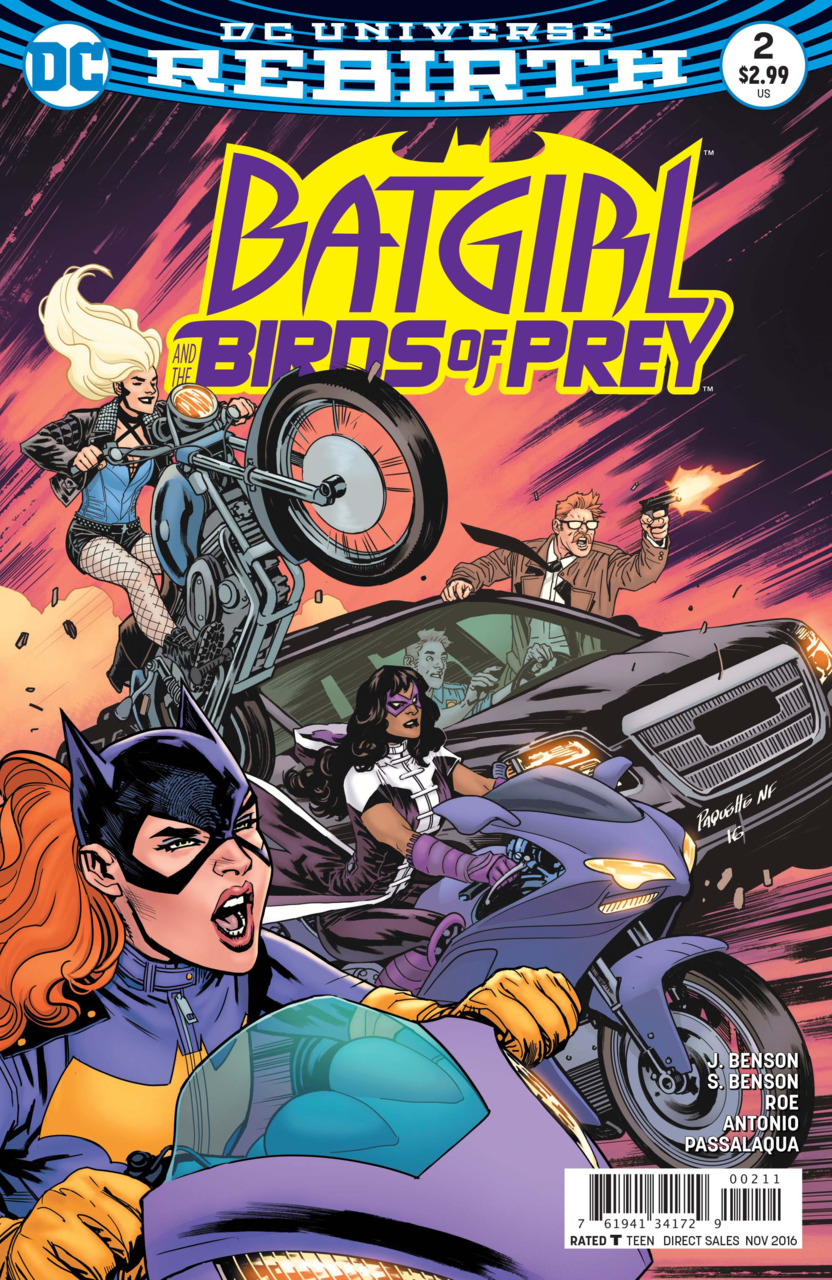 In Brief: Batgirl, Black Canary, Huntress, and their allies face mobsters, bombs, and trolling as they race together for justice.

Summary (Spoilers): On the streets of Gotham, Batgirl (Barbara Gordon) and Commissioner Gordon (her possibly unwitting father) race to a police safehouse with mobster Santo, with Black Canary (Dinah Lance) and Huntress (Helena Bertinelli) flanking for protection. They tangle with Santo’s security, Babs shooting out the tires of one cyclist with her dad’s shotgun, and Canary halting the majority in their tracks with her canary cry.

Once at the house, the Birds interrogate Santo, with Huntress managing to get the new Oracle’s bank account number. Gordon pulls Batgirl aside, telling her he’s worried this problem is too big for the three. She assures him, rather angrily, that she has the problem covered.

Back at the Clock Tower, Babs starts tracking Oracle, while Huntress refuses to reveal her identity. Batman shows up, having been contacted by Gordon. However, he demonstrates his trust in Batgirl by offering, but not insisting on, his help. Huntress spars with Canary on the roof of the Tower. They return to find Babs deep in tracking (and energy drinks). Babs finds a server farm connected to Oracle, and the three of them rush out. Huntress stays outside to cover them, while Babs and Dinah investigate. Babs catches a wipe program still running, while Dinah finds bombs set to go off in one minute. Huntress saves them at the last second, while Batgirl manages to get the data she sought.

Meanwhile, Oracle and mob boss Fenice send their snaky henchmen to the safehouse to snatch Santo.

In Depth: The Benson’s continue to bring their A-game to the relaunched Birds of Prey. Starting with their madcap chase, highlighting all three of the Birds and Jim Gordon’s skills, and developing them through key relationship points like the developing trust of Huntress, they continue to juggle the past and present, honoring both. Continuity references range from Canary’s distrust of technology in the server farm (calling back to her horror at Babs’s laptop way back in the first Birds of Prey ongoing issue), Babs, Dinah, and Helena’s early relationship (with new and old tension over Dick Grayson!). The corny, funny location title cards continue, and the dialogue maintains its television banter polish. Surprisingly, they also write a Batman with more trust in Batgirl than expected, though their Jim Gordon echoes Batgirl Year One’s reluctance to see his daughter (knowingly or not) endanger herself. While the Oracle plot moves from clue to clue without a serious sense of closing in on their mysterious foe, the growing relationships between the Birds (and their allies) keeps things engaging.

Claire Roe’s art continues to impress. This issue, I noticed the really thick black outlines around the characters, that help colorist Allen Passalaqua’s vibrant colors and use of shadow brilliantly. Roe receives help from Roge Antonio (Batman Annual #4, Batman and Robin Eternal, Grayson), one of the up and coming artists DC has tagged to provide fill in art, provides a few pages that mesh well with Roe’s art. Though Antonio’s faces and figures are more rounded than Roe’s thick-lined sketches and intensely defined musculature, the two share a zany, appealing sense of expression, so that Antonio’s rendering of Babs’s manic grin as she discovers the false Oracle’s mistake in leaving the wipe program running feels of a piece with Roe’s energy-drink chugging heroine earlier.

In Conclusion: In their first outing together, the Birds have some wobbly steps, but maintain a thrilling pace and start developing the relationships that makes the title well worth following.