Review: Batgirl and the Birds of Prey #4 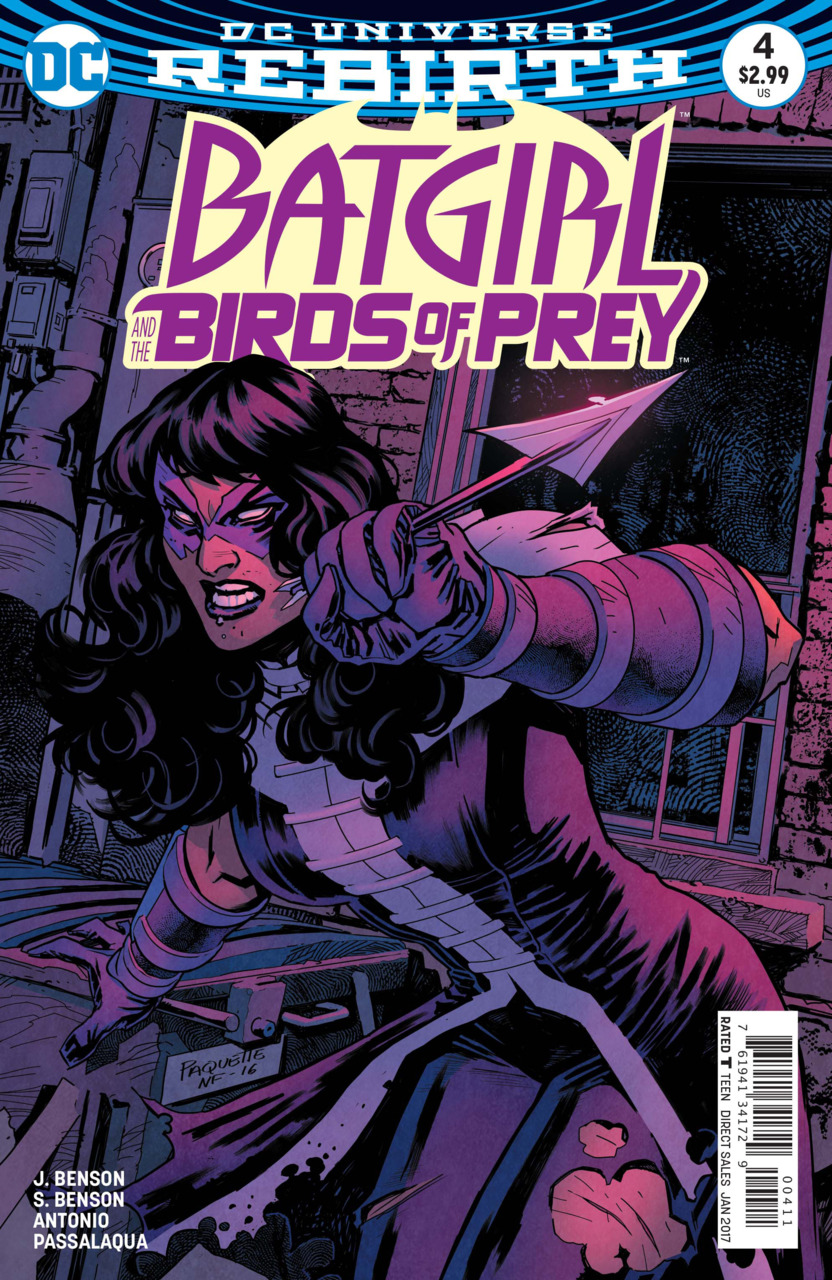 In Brief: The Birds close in on the new Oracle as the Huntress reveals her backstory.

Summary (Spoilers): Over a hundred years ago, recounts the Huntress (Helena Bertinelli), her family created the mafia in Sicily. They emigrated to America – to Gotham – and built up a rivalry with the Cassamento family. Today, she is the Huntress, on a mission to avenge her family’s brutal murders. She tracks Fenice to her lair where she has the Cassamento boss captured, but before she can crossbow her target, the snake gang attacks. The three-on-one, meta vs. human fight goes poorly until Batgirl (Barbara Gordon) and Black Canary (Dinah Lance) intervene to save her.

Initially bitter than Fenice has absconded with Cassamento, Helena is shocked when Babs reveals she knows her identity from the Oracle files. Though she makes a show of leaving, Huntress does join the Birds in the Watchtower, unmasked, and tells them the story of her the slaughter of her family.

As they talk, Babs’s plan to trace Oracle’s equipment yields fruit – the location of Oracle’s main setup. Helena rejoins the team, and they bike together to the lair. She reminisces about her training in Sicily by her uncles. They arrive at a huge skyscraper, guarded by robots. Fighting their way through models of Batman’s foes, they arrive at the center of Oracle’s power, and find a shrine to Batgirl…

In Depth: The Bensons continue with their “Rebirth” of the Birds of Prey, this time focusing on the Huntress. Fans of Helena Bertinelli in 2011 were intensely upset when the miniseries “Crossbow at the Crossroads” by Paul Levitz and Marcus To ended with the reveal that the Huntress they’d known and loved for the past twenty years was no more. With the advent of Rebirth, the writers were given a mandate to restore much of what was lost in the new 52 – and today, that was Helena’s backstory. When Tim Seeley introduced Helena Bertinelli in Nightwing and Grayson, the Matron of Spyral, Dick Grayson’s boss and love interest, fans were excited, but a bit frustrated at the seeming “in name only” appearance of a much beloved, long lost character.

Now, though, Helena’s origins and motivations are front and center. Mafia family: check. Complicated relationship between revenge and justice: check. Murder of parents and brother at young age, then training in Sicily: check. It’s all there – all the elements that made Helena’s backstory in Greg Rucka and Rick Burchett’s Batman/Huntress: Cry for Blood and Ivy Madison and Cliff Richard’s Huntress: Year One so compelling. The only thing missing is Helena’s desire to be a teacher – and that was partially filled by her role as Matron of the School of Assassins at Spyral’s heart.

Roge Antonio is taking over art duties for Claire Roe this month, and according to solicits, next as well (Roe is reported to return for the finale #6). Fan pushback on Roe’s art has been widespread and intense, but this reviewer hopes she stays at least for a year. Though Antonio is DC’s best fill-in artist at the moment – his appealing style mixes cartoony expressions and pose ability with a smooth, skilled figure and action rendering pattern – Roe’s work with the Bird’s bodies, making them incredibly muscled yet sexy, is something not often seen in the waif-fu D-cup comic book world. However, this issue is extremely well done by Antonio, jumping from time period to time period with the flashbacks, highlighting the character qualities and mood of the book, and accentuated by Allen Passalaqua’s rich, dark, and amazing coloring.

Two notes struck a tiny bit flat this issue. The first, minor issue, was Huntress’s comment that “God didn’t save me” at her parents’ and brother’s’ funeral. Hopefully the Bensons will continue with Simone’s sympathetic portrayal of Helena’s complex, difficult Catholic faith, rather than going the lazy route of the lapsed practitioner. Second was the obvious hiding of Helena’s mother’s face, to prevent us realizing that Fenice is her mother returned from the dead. The solicits for issue #6 reveal that Helena will have to choose what to do about her mother then, so it’s a bit heavy handed to try to hide it at this point in the story.

These two problems aside, the Bensons and their fill in artist provide another great Rebirth issue of a series that will hopefully make as strong an impact into the history of this team and these wonderful characters as the legendary Dixon and Simone runs of the early 2000s.

Pick up/Pass? Absolutely a pick up – the Benson’s fun tone with forays into darkness and Antonio’s skilled pencils are very worth it.

In Conclusion: The Huntress returns to her vengeful roots and rejoins the team in an excellent issue.