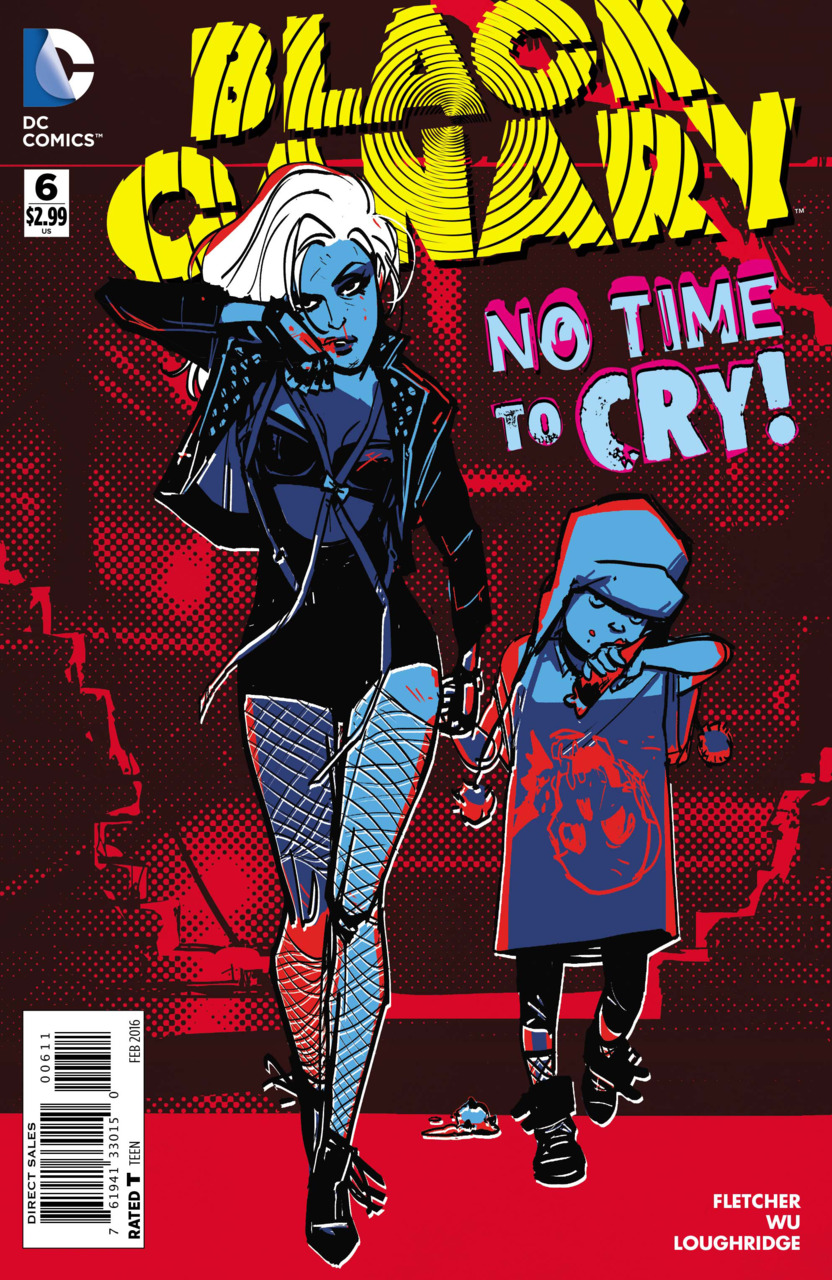 Man it’s been a rough week. First of all, I got some sort of stomach flu. And on top of that, it’s been a long while since we’ve read an issue of Black Canary, which ended up hurting this issue. Now sometimes you can come into a comic, and not know what’s going on, and it’s exciting. “Where are they going with this? What’s going to happen?”… And then there are times like this, where you just have no idea what’s happening. Really, it felt like majority of the creative team was just a little rusty, and it just didn’t meld together as well as usual.

Brenden Fletcher continues his story from last issue, and the opening to this comic presents a number of issues… 1) it confuses me. With a long wait, I need something that quickly reminds me where we are in the story, and just move on. 2) it’s jarring. This is not what I remember from last issue. 3) it adds nothing to the story. It really just feels like a way to fill their page count. Now I don’t want it to come across that I’m tearing into Fletcher because of his opening, but the whole issue continuously had the feeling of “We’re going this way… Well, that didn’t work. I guess we’ll do this now…” — and then start that process over. The direction of the book just felt forced, and it didn’t work for me.

Annie Wu is back on art, and it’s really good to have her back. I really enjoy her style, her acting ability, and usually her storytelling. Now I say usually, because there were several times where I was completely confused as to what was going on. There was a moment where something big happened, but Wu was so subtle about it, I missed it completely. Now, maybe it’s because I’m sick, that I missed it, but it’s just not a good feeling to not know what’s going on.

Lee Louridge continues to be amazing in his colors. The versatility he shows between the normal moments backstage and the crazy moments on stage was fun to watch.

Steve Wands is the letterist this issue and does a solid job. Everything is where is should be, and nothing throws you out of the story.

Recommendation – I don’t see much reason to buy this book. It feels sloppy. I hate saying that, but that’s how it feels. I’d pass, and hope it gets better next issue.

We open with Dinah talking to three business people in a limo. She’s just lost two people, and she’s angry…

We cut back to the end of last issue with Maeve and her band challenging Black Canary to a battle. The band doesn’t trust her, or anyone else in the building with Ditto’s safety, and they decide they should leave. Ditto scribbles down some sound waves that (with something like a QR reader) mimic a speech Dinah gave before that is supposed to be motivating… Somehow? I don’t really see how it relates. Kurt comes in, announcing that they are being called up on stage, so now the band changes their mind and decides to play for some reason.

The bands get to playing, but the conflicting vibes overpower Ditto, and as Kurt tries to save her – they both vanish. Dinah kicks the band’s butt in a fit of rage, and Maeve runs away crying. Black Canary arrives at their record label to get some answers from “Mr. Pike”. Except it’s not Mr. Pike. It’s…. Kurt Lance?! (“And I would’ve gotten away with it too…”) He’s super old, saying that he’s been behind everything that’s been happening for quite some time, and we see little Ditto peaking out at them from behind the door

Closing thoughts – Just too many problems in the story. I don’t want to sit here and be negative, so I’ll leave it at that. Check back with me next time to see if I think it gets better.