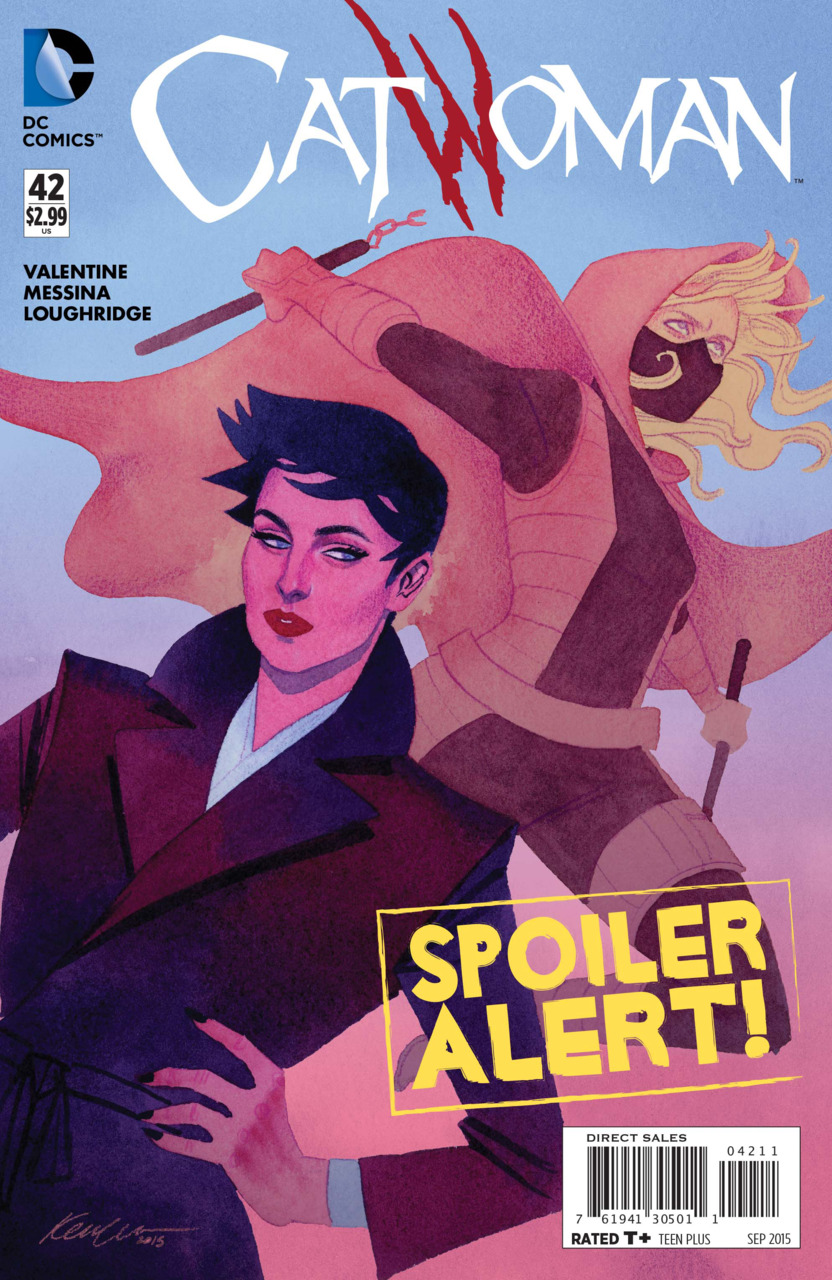 In Catwoman #42 Selina Kyle balances her duties as head of the Calabrese family with her quest to find Batman. Both goals are at risk as things get complicated in Gotham.

The issue opens with Detectives Keyes and Alvarez investigating the death of Bill Turner. He was doodling some Batfamily symbols which lead them to believe there is more to his death than meets the eye.

Selina is discussing the strategy to get their crime families on board with bringing the Falcones back in the fold with Antonia and Ward. Selina is having trouble getting them both on board with her plans…and keeping her secrets. Ward wants Selina to tell Antonia that she is Catwoman but Selina doesn’t think it is time yet. She stresses that Ward should make sure that the crooked cop that is on their payroll, Bellici, doesn’t find out about her secret identity.

The crime families, particularly the Riley’s, aren’t accepting of the Falcones and Selina and Antonia have to lean on them a little.

Selina has what she thinks is an ace in the hole however. She has allied herself with Penguin. She visits him and he shows her some secret tunnels beneath Gotham that will allow her to escape trouble if need be. Penguin takes her to the end of the tunnels which lead to the outskirts of Forster Lane which is near Riley territory and where Oswald is not permitted.

A gunman emerges from out of the night to kill Oswald but Selina stops him from shooting. She leaves the failed assassin to Penguin to dispatch.

At the Hasigawa Penthouse, Penguin, Sionis, Hasigawa and Eiko are discussing the recent events. Sionis is concerned that the assassin Hasigawa sent after Selina hasn’t reported back. Eiko is upset that her Father tried to kill Selina without telling her. Eiko leaves the meeting and goes to Selina where the two chat in their respective Catwoman getups. Eiko warns Selina about the attempt and Selina tells her to go back home so as to avoid suspicion.

Selina goes to Detective Alvarez’s apartment where she gives up the Calabrese’s dirty cop Bellici so Alvarez doesn’t suspect she is allied with the Calabrese family. Eiko however catches Selina leaving his apartment building and scolds her about collaborating with the police. Selina then runs into Spoiler who isn’t too happy that Selina kidnapped and threatened her. Spoiler attacks but is no match for Selina.

Searching for Batman, Selina goes to Bill Turner’s house to do some investigating. Spoiler catches her on the rooftop and the two trade barbs. Apparently Spoiler has seen the Selina and Eiko in the cat suits.

The complex plot deepens in this issue. There are some great moments in this story, such as Selina’s collaboration with Penguin and Antonia and Ward’s struggle with the families. However, the story is starting to get murky.

Also, I’m not sure if the final panel where Spoiler asks if the is ‘seeing double’ if she is referring to Selena and Eiko in the Catwoman suits. However, I’m not sure where she saw the two together. I feel like I’m missing something basic here but I’ve looked over the pages several times and can’t figure out what it is.

Some of the problem could be the art. I do like the style of the figures and the coloring in this series, however it is sometimes difficult to tell Selina and Eiko apart. The fight scene between Catwoman and Spoiler is just so-so. Nothing thrilling here, but this isn’t really a fighting book, more of a crime family story so that isn’t a fatal flaw.

I want to like this series since it is more complex than most books. However, the story needs to be told with a little more clarity to better bring out the characters and conflicts.