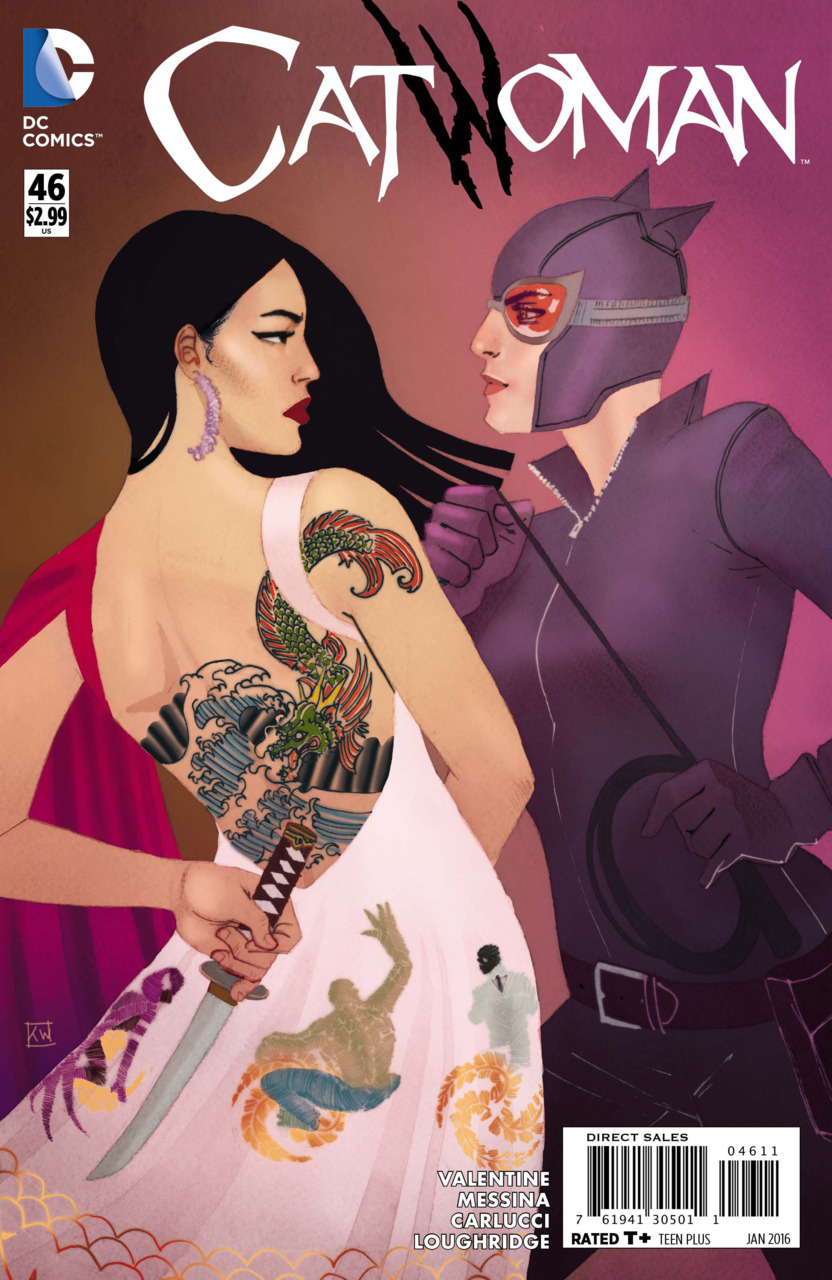 First off I’m very excited to review Catwoman #46 and happy to be reviewing this book. I haven’t read the Catwoman New 52 Series, but I’ve always loved Selina Kyle ever since Hush. I was reminded this morning to write the review as the neighborhood cat meowed until I fed her sassy self.

The story opens up with Killer Croc informing Eiko that heads of the families have arrived at the gathering. Stephanie Brown promptly arrives to inquire why Antonia Calabrese is not invited. The writing is on the wall that something big is about to happen.

Antonia arrives herself to offer her condolences and to offer support to Eiko, but it’s obvious that Eiko has made up her mind that blood will be spilled. After Antonia’s departure Killer Croc lets Eiko know that the hit squads have been notified and then like at the ending of Godfather Part I, Eiko’s assassins take out the competition. Will she be able to redeem herself from this act of violence? Time will only tell.

The next several pages of Catwoman #46 are images and actions sequences of rival gangs and leaders being taken out with extreme prejudice. Police detective Alvarez and Keyes show up at the scene where numerous slain gang members met their violent end. They bounce around several ideas that Catwoman was involved, but quickly agree this isn’t the work of Selina Kyle. They mention Sionis, but quickly dismiss his involvement and then wash their hands of the figuring out who committed horrific crimes.

The story then turns to Catwoman in action taking down Eiko’s assassins. Catwoman quickly scares off the rats and relishes in her victory, but the victory is short lived. Stephanie Brown appears from somewhere to inform Catwoman of Eikos’ plot and that Antonia Calabrese was not present at the gathering where the heads of the families were slaughtered.

The story shifts from Eiko’s Gordon Gekko’s hostile like takeover over of a competing firm to Bill Turner’s death. Stephanie Brown states that she hit Turner in the head thus killing him. She goes into a story relating back to Batman: Eternal, but Catwoman quickly dispels this myth and informs Stephanie that he was shot and killed therefore it wasn’t by her hand.

The action picks up again as Selina confronts Eiko and they both offer their own ideology and how they would of handled the situation differently. There’s a great fight scene between Selina and Eiko. They both get their licks in, but the fight ends in a stalemate.

Selina transitions to the underbelly of Gotham and seeks out Penguin and finds that Antonia is among his guests. They all have a nonchalant response that Eiko took out the heads of the crime families. Penguin reveals how it benefited him and his operations. Selina rides with Antonia and she explains how Eiko’s rash decision benefited the Calabrese Family.

The story ends with Selina in her Catwoman garb looking at Gotham. It had a very Michael Corleone moment of Selina looking at the Gotham skyline, “Just when I thought I was out, they brought back in”. She leaves on her motorcycle, not looking back.

I won’t lie and act like I know anything about art, cause I don’t. I don’t have much rapport with Genevieve Valentine as an author nor with David Messina as an artist. I will state that enjoyed the art and found the story fun and enjoyable. When it comes to art in comic books I know what I like and don’t like. I am a fan of Jim Lee and Jae Lee’s Selina Kyle. This comic for whatever reason brought me back to Gotham Central as a noir book with a contained story. I look forward to Catwoman #47.