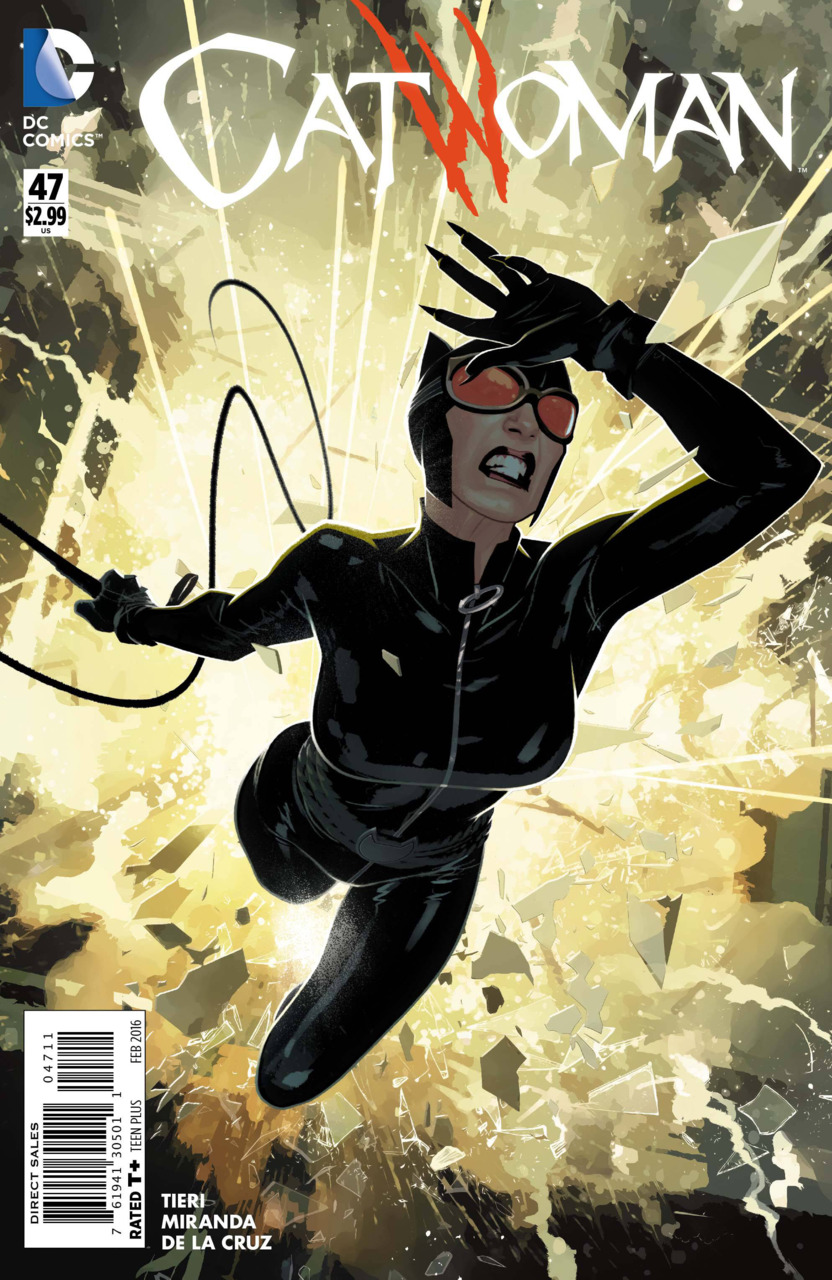 Selina is out of the mob boss business and back to pilfering jewels when she takes on the job of a lifetime and things get complicated in Catwoman #47.

The Odessa Club is a haven for Russian mobsters and owned by Nikolai the Bear. Nikolai has a black diamond called the Star of St. Petersburg locked in a safe in his office. The diamond used to belong to the Tzarina of Russia and is worth a bundle. Selina uses stealth to get into Nicolai’s office and then dusts off her safe cracking skills to get into the safe and grab the diamond.

And she would have got away with it too if Nikolai hadn’t decided to show off his prized jewel to a pair of fancy ladies. Selina has to kick him in an indelicate spot and dodge bullets to escape out a highrise window. Yeah, Selina is glad to be Catwomaning again.

Later, Selina is eating NYC pizza (with a knife and fork, whaaaat?) with her old friend and fence Louis the Mustache. The two enjoy some reminiscing and tiramisu while Louis gives Selina another job. A big job. Maybe the biggest – the Frost Diamond.

Unfortunately the client is mysterious and Selina doesn’t trust weird jobs like this even for big money. However, Louis tells her that he is dying from stomach cancer and if they can get and sell the diamond he can set his wife and daughters up for life. Against her better judgment Selina agrees.

The Frost Diamond is owned by the Frost Group, an investment banking conglomerate. After some investigation and wangling Selina gets invited on a date with CEO Grant Brice to a charity gala. At the gala Selina’s partner Tesla shuts off the lights in the building and with the aid of some see in the dark glasses Selina knocks out the guards. With the electronic protection disabled she is able to spirit the gem out of the building.

Selina makes her way to Louis’ office where she climbs in through the window. She tells Louis that she has the gem but finds that he has been killed. Before she can get out the window the room fills up with police who tell her to put her hands up. Selina has been set up. Until next month…

This is the first issue of Catwoman with the new creative team. Following up after the acclaimed Genevieve Valentine arc can’t be easy but writer Frank Tieri adds some much needed humor to the series. Valentine’s book was a solid gangland story starring Selina as the Calebrese mob boss. It was good stuff, but in Tieri’s hands Selena is back to her burgling ways where she belongs.

Tieri shows a knack for adding just a touch of humor to his plot. I really enjoyed the dinner between Selina and Louis. There is a lighthearted back and forth over pizza and dessert that really felt like the pair were old friends. Well lighthearted until the C word came up, but even so…

The end of the issue shows good coordination between the writer and artist, Inaki Miranda, and colorist Eva De La Cruz. Selina has some great facial expressions as she sees Louis’ dead body and subsequently trapped by the NYPD. Also notable is her expression as she reaches into the safe to steal the Star of St. Petersburg, she seems very satisfied to be back in the not-so-petty-theft business. The penciling is at times almost old fashioned in a classic comics sense, clean and no nonsense.

The coloring of the issue is awash in glowing mauves, blues and greens. It is a very attractive book to look at. I was not as much of a fan of Joshua Middleton’s cover, it was good but didn’t really capture the essence of what is inside like I would have liked.

All in all I am going to give the new Catwoman a good rating. I enjoyed this issue as much as any of the old arc though there still needs to be supporting character development. This issue was a reintroduction to Selina the thief. I am hopeful that as the story progresses more characters and more complexity will develop.