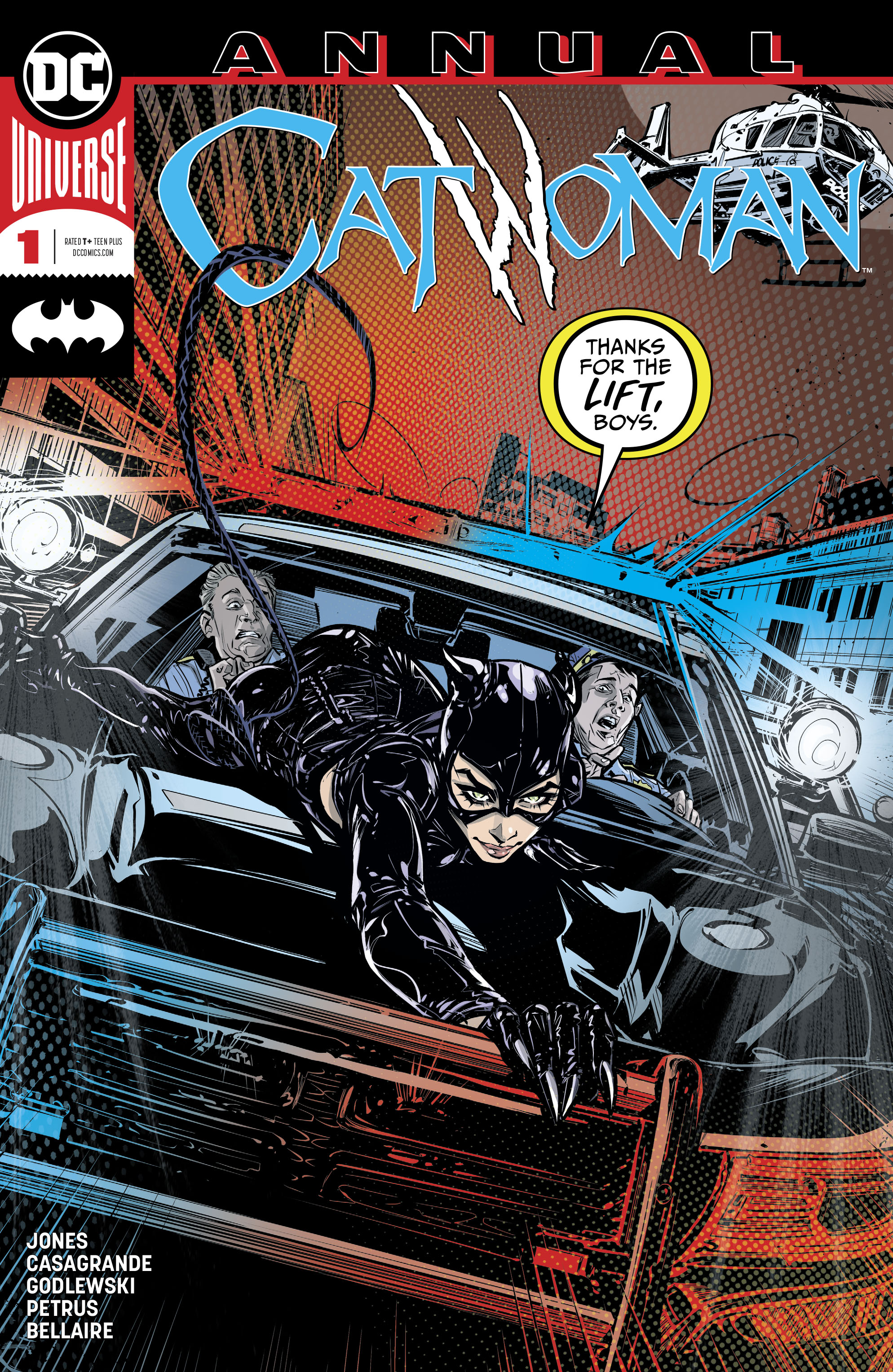 Overview: After teaching a group of women the tricks of the trade, Catwoman finds herself in the middle of a murder/suicide case.

Synopsis (spoilers ahead): In the city of Villa Hermosa, we begin as a disheveled witness, Amanda Burress, is giving a videotaped statement. She knows that whoever the interviewer is, they want to know why all those girls killed themselves. They also know that she saw everything and expect her to start at the beginning. Amanda implies that the killer is a “she”, and that she is psycho and that they used to work together as somewhat leaders of a gang of thieves. “She” taught them how to steal and when the gang got better than her, she snapped. Amanda says she saw her kill ten girls with her hands. The interviewer intervenes and says the police report said there were only three bodies. Amanda shrugs off the difference of seven murders and says she shouldn’t even be talking.

At a diner in Villa Hermosa, two detectives are also giving videotaped statements.  They proceed to tell the interviewer that it’s the worst homicide case in years, and it’s a classic case of a psychopath.  Then through flashbacks in the art, they say that the murder was called in by an anonymous tip and that the apartment where the bodies were found was bought with cash. The police can’t find the name of the purchaser in the system, so they believe the name is an alias. The two detectives also say that there was no identification on the victims, but a note was found and it was set up to look like a murder/suicide.

We then switch to yet another taped interview, but this time it’s Selina Kyle.  She tells the interviewer that that wasn’t how it happened and that she’ll say what happened, but the interviewer will have to trust her. Selina then proceeds to tell the interview how she had come to town and started to steal things.  She says she’s been portrayed as a damsel, hero, or villain depending on who you were talking to. She says that her life is played out thru a strict set of rules, but of course, one rule is that rules can be broken.

Selina then tells how when she was out on a heist she came across a woman strung out on drugs.  Her name was Chesa, and Selina took her in and took care of her, eventually becoming used to having Chesa around.

While Selina was out one night, Chesa had a bunch of her friends over and when Selina returned, she found one of her prized stolen items had been broken.  This upset Selina very much and she launched into a long speech about why she steals things. About rules and entitlement, acquiring items to feel meaningful. About how since she was born with nothing, the rules don’t apply to her.  And how she steals to “stick it to the man”. The women that Chesa invited over want Selina to teach them how to steal and she agrees. She proceeds to show them the ins/outs of stealing high-end items.

Back at the diner, the detectives suggest a cult type of deal, with social media influences.

In Amanda’s interview, she says that the gang wanted to prove themselves to Selina, and wanted to do so by stealing an ancient spear.  We then see the women scouring social media, and they find a post with the spear in it. An anonymous witness interview shows that he owed Chesa a favor and helped get the gang into the house where the spear was. Amanda says that the spear wasn’t there and the gang left empty-handed.  However, the art clearly shows she’s lying, and that a man was waiting in the dark room where the spear was and killed the girls. Amanda wanted to help the killer, Morty, whose name had also popped up on the social media posts. The bodies had been moved to the apartment and staged to look like a murder/suicide and the anonymous witness gave Selina the key to the apartment.

The detectives confirm that no blood or fingerprints were found at the apartment.

Selina says the police found her with the bodies, but she didn’t kill them.  She said she thought about going back to Gotham, but she felt some responsibility for the girls.  She had located two of the three surviving girls, and they were safe. She also says that she felt she had no choice but to call someone she had been avoiding for help…..Lois Lane. Selina was also renting a room from the anonymous man, and she eventually needed his help in tracking down Amanda.  Catwoman crashes a party that Amanda is at and confronts her about staging the crime scene to set up Selina.

We then see Morty break through the wall, and video taken show that he is the villain – Immortal Man.  Morty/Immortal Man thought that the stone in the spear is what brought him immortal life. Selina grabs the spear, which was on the wall, and stabs Morty with it and he falls out the window.  She uses her whip to grab the spear as Marty falls. Suddenly Superman flies in saving Morty as the stone breaks on a boulder.

Back in Amanda’s interview, the power is cut as Catwoman arrives and takes Amanda with her.

Analysis: Being an annual, this is a stand-alone story and I really like that.  The longer page count an annual provides certainly helps with being able to tell a full story.  Monthly books that are “writing for the trade” can get very long and tedious to get through, especially if they aren’t good. This is a very well written crime story, told through the points of view of many different characters and it works very well.

As far as the positives, I loved using other DC Universe characters. I’ve never heard of Immortal Man before, and my research found that he hasn’t been used in a DC book in 20 years. Immortal Man does have a connection with Superman, so Selina calling Lois and having Superman help certainly makes sense. I loved Selina questioning herself; the choices she’s made because of her leaving Bruce and the trauma from that that she’s still dealing with.

Only one real negative with this issue was that I was sort of bothered by the way Selina justified her resorting to stealing because she was born with nothing. In the real world that doesn’t work. At all. I realize these are comics and at best Selina is an antihero, but it struck a chord with me.

The art was average to me. Not bad by any means, but not great. When you have three artists on one issue, it’s pretty obvious where the art changes. The shadowing/cross hatch/dirt effects on Amanda weren’t too good in my opinion. It looked more like a beard than dirt or a shadow. Also, being a standalone story, I’m sure this was scheduled way out. I’m curious why there was a need for three artists at all?

Final Thoughts: Overall despite a few minor issues, this is a fantastic standalone crime story, that utilizes characters in the vast DC Universe. I highly recommend this book.