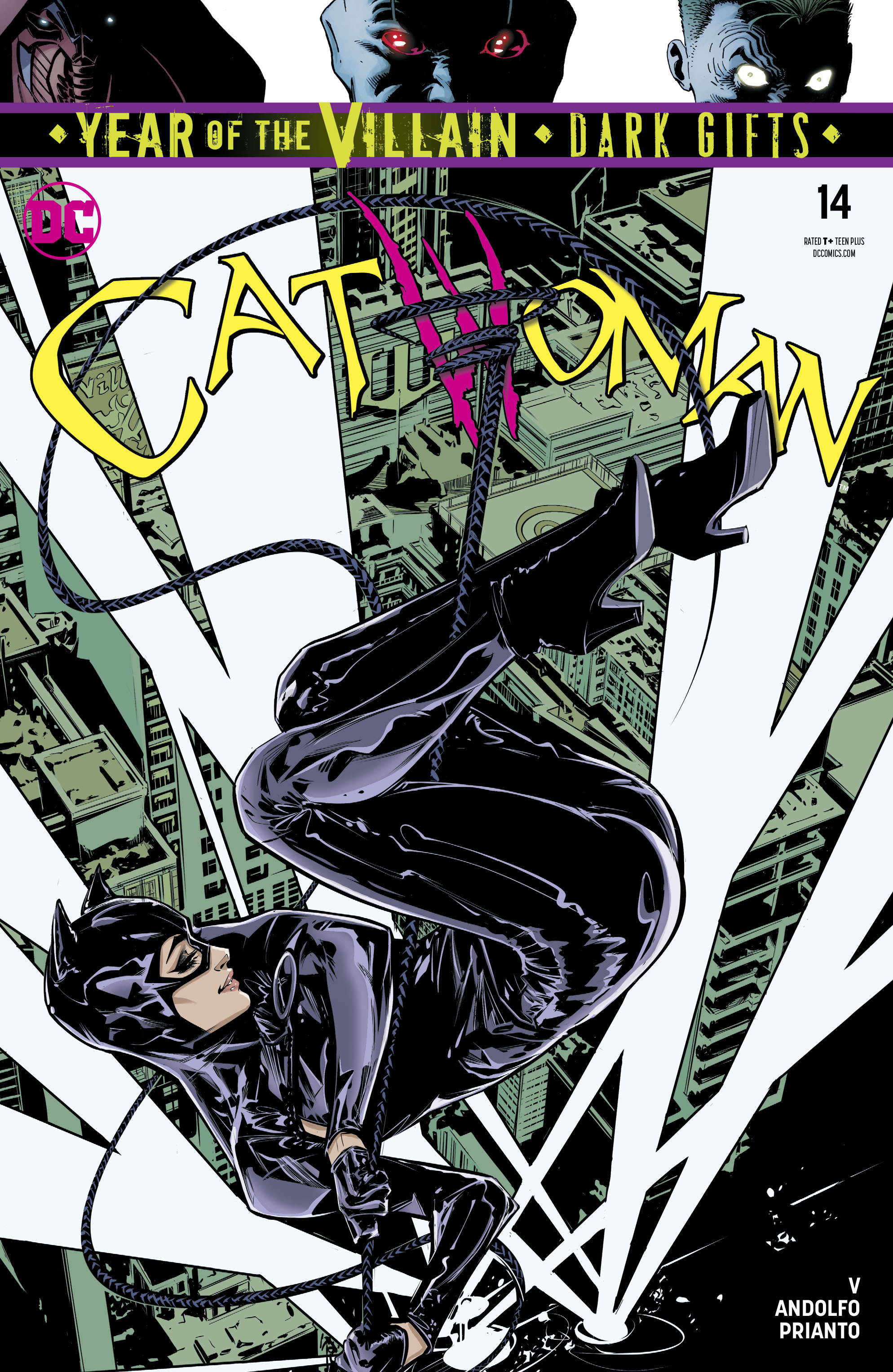 Overview: Catwoman’s services are enlisted to recover an accounting file that could compromise all of Villa Hermosa’s crime syndicates.

Synopsis (spoilers ahead): The two-part intermission starts with Catwoman sinking deeper and deeper into deep waters. She’s bleeding, she believes she will drown. She remembers Batman and all of the times he rescued her.

This all, she begins to tell, started with a meeting with Karen Rain. She arranged a meeting with Selina to propose a minor retrieval job with benefits. Seline would be retrieving a file left by Rain’s late husband, an accountant who worked for a number of the crime families of Villa Hermosa. In exchange, she’d get to keep all the money in the offshore accounts listed in the file, except for the little money necessary for Ms. Rain to travel to Spain and settle like she was planning with her late husband before he died.

Later, on a rooftop, Selina goes over her plans to take the documents while they’re being transported. She gets to the briefcase where they’re being kept, but someone, somewhere is coordinating an attack against her. Explosions are set off everywhere around the security car and Catwoman is locked inside. Before she can make any move, Nobody is sent to get her. They’re caught in a chase that goes from streets to rooftops until finally, he manages to get his hands on the briefcase. Selina, though, has kept the one specific file inside the handle of her whip, in a safe compartment. Before she can get away, a sniper fires at her. She falls from the rooftop into the bay, and this is where we found her at the beginning of the issue.

Before she drowns, a caped man on a boat rescues her. For a second, she believes him to be Batman, but he is in fact the Gentleman Ghost. He transports her back to shore and, between pleasantries and niceties, he reveals to her that it was not the files that the people who shot her were after, it was her. There was a prize on her head. He, though, he’s merely a thief, not a murderer, so he’ll be happy with taking only the file and not her life. She agrees to give him the file, but only after she settles this one affair hanging over her head.

Analysis: Anytime a big event takes over a title, interrupting the main storyline, you will find me tiptoeing into the tie-in. They’re usually convoluted, slightly rushed, disruptive to the character’s current construction and quite disposable. What a pleasant surprise it was to find that Catwoman’s Year of the Villain was not one of those.

Ram V manages to actually make his Selina feel more connected to her world than the previous issues of the series have felt. She reminisces about Batman. She gets into some trouble that is related to her being a newcomer in Villa Hermosa. She goes into a heist only after balancing out the consequences and her gainings. Even if the writer does fall into the easy-writing of Catwoman – a stray cat, the cat being drowned in a big-big pond of water, the nonchalant nature of Selina – it still reads and smells and licks itself as Catwoman would.

The storyline developed here, which will continue in issue #15, picks up one of the current trends in DC: bringing back underground wacky villains. Gentleman Ghost, for instance. He is so out of tune with the slight realness of Selina’s world that it makes the whole story even better, even though he would probably never fit into one of Joëlle Jones’ stories as well as he fits into Ram V’s.

Even with being a fun, in-character tie-in there is one big misstep made by the creative team. The moment Selina falls into the harbor. One minute she is in the middle of the city, running rooftop to rooftop. Then she falls from a rooftop into a water patio between some building. Next minute, she is in the middle of the harbor being rescued by boat. It might sound like some minor detail, but it is a plot-hole left in the storytelling – both graphic and logic-wise. (Editor’s Note: It can be hard to tell due to the coloring of the bridges and buildings, but it appears that Selina fell into a canal between two buildings which could lead to the open sea making this story element make more sense.)

Final Thoughts: Perfectly balanced between a stand-alone storyline with an in-continuity background, this issue is less of a Year of the Villain story and more of a Catwoman story, requiring no further reading of the current event to understand the plot. Incredibly in-character, Ram-V and Mirka Andolfo explore the stepping stones laid by Joëlle Jones in the past year magnificently while still making this their own Selina in their own Villa Hermosa.