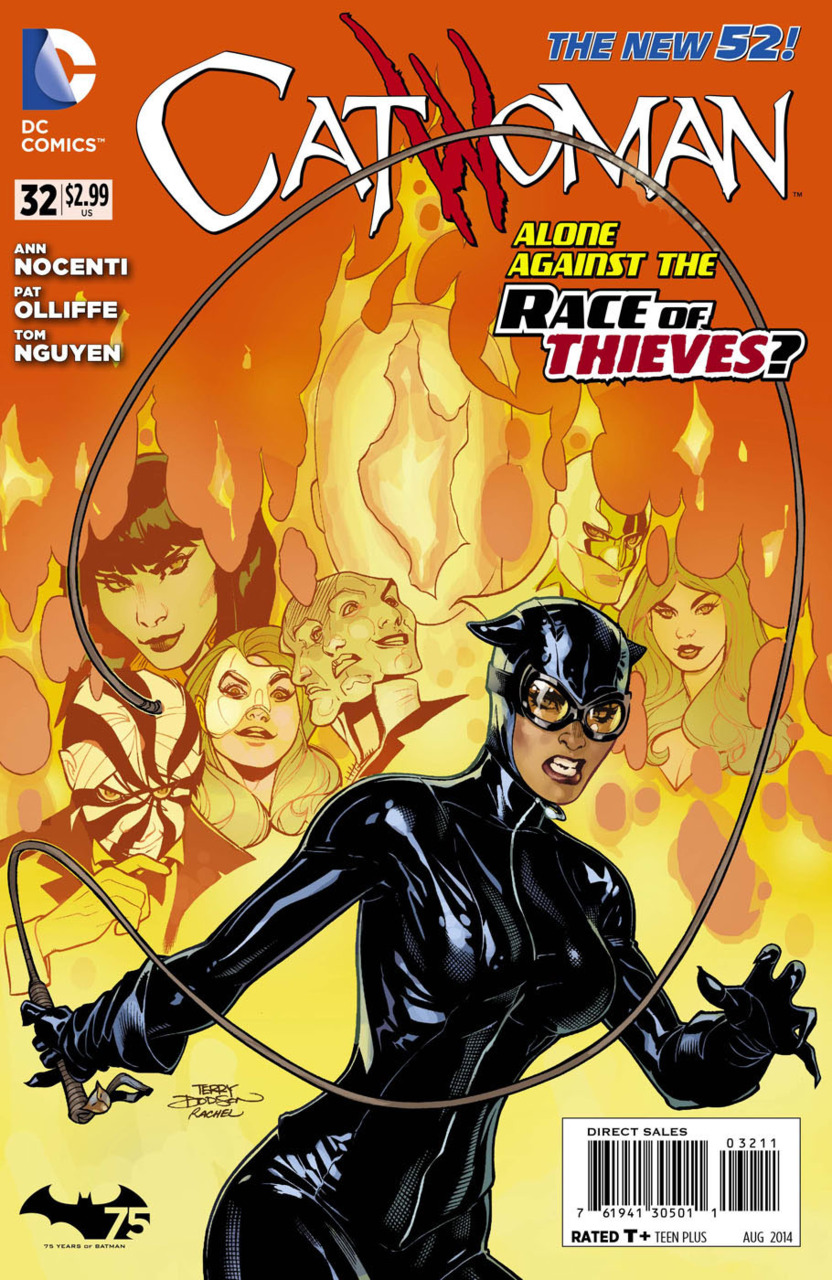 I'm gonna rant a little bit here, not over the book, but at the bigger picture. I encourage you to read this review for that, and not because you want to actually know what happens in this book.

What. The. ?#@$! I'm currently looking back over Catwoman #32 again, but I still don't really know what's going on. How the crap does Ann Nocenti keep getting work?! It's really sad to me that "professional" writers can put out such garbage, and continue to get paid by publishers for it. And you know what? I'm not even mad at Nocenti. She's having fun writing crazy stories, and she's doing it because she's allowed to. What irritates me, is that DC is still printing this. There are hundreds, maybe thousands of average, everyday people who are aspiring writers. People who would love to have a chance to write for DC, and would put their heart and soul into writing a character like Catwoman. People, such as myself, who feel like they have something to bring to the table, even though we lack experience in the field of comic book writing.

I know for a fact, myself, as well as many others, could write a more interesting story than this. There are other no-name people who could write better stories better than what Gail Simone is writing over on Batgirl. I get that there are different tastes, different ways of storytelling just like there are different styles of art. If everyone drew the same, it would be very boring. If everyone wrote the same, stories would be very boring. But there are key elements that a story should have in order for it to be good. Why is this story being told? What is the point? Do I, or anyone else care for the characters in this story? If there are questions to these questions, then you have a very crappy story. No one will care, which is why Catwoman is being made fun of right now.

There are funny, crazy comics out there. Harley Quinn is a good example. If you read Superior Foes of Spiderman, that is another good example of crazy, funny stories. But in those comics, they make you care about the characters involved. If the character in those comics died, you would be sad it was over. If Catwoman died, you would be happy, because this nightmare that has been going on for years would be over. But Nocenti doesn't accomplish the basic needs of a good story, so she doesn't end up with one. Funny how that works, huh?

Patrick Olliffe is on art, but this whole this is sloppy. It's interesting to me that it is commonly known that drawing a chase / race scene in comics is among the hardest in the business. Yet, that is the story Nocenti tries to tackle, here. There are panels all over the place, and it's very confusing as to what's happening. It looks like this would make a better demolition derby than an actual race. And then we have flashback scenes from hours ago, but I have no idea how this ties into the main story.

I'll tell this in a linear fashion to avoid confusion… even though that is inevitable. Selina is helping out on a cold case, a woman who was killed, and a child was held out on the will. Selina feels bad for the kid, who was left on the streets. The guy who is doing the investigation was paid off though, so Selina puts him in position to do the right thing.

Then Tesla calls, because she's finished the super fast car for the race. Selina enters, she has teamed up with Rat-Tail and Mirror Master. To get to Roulette, who has the child mentioned earlier hostage. They race a train, destroy it, and then let the old man, who had the biggest odds win. Selina bet on him anyways.

They go to get the money from Roulette, but he (or she) is gone, and Catwoman. Goes into rage mode.