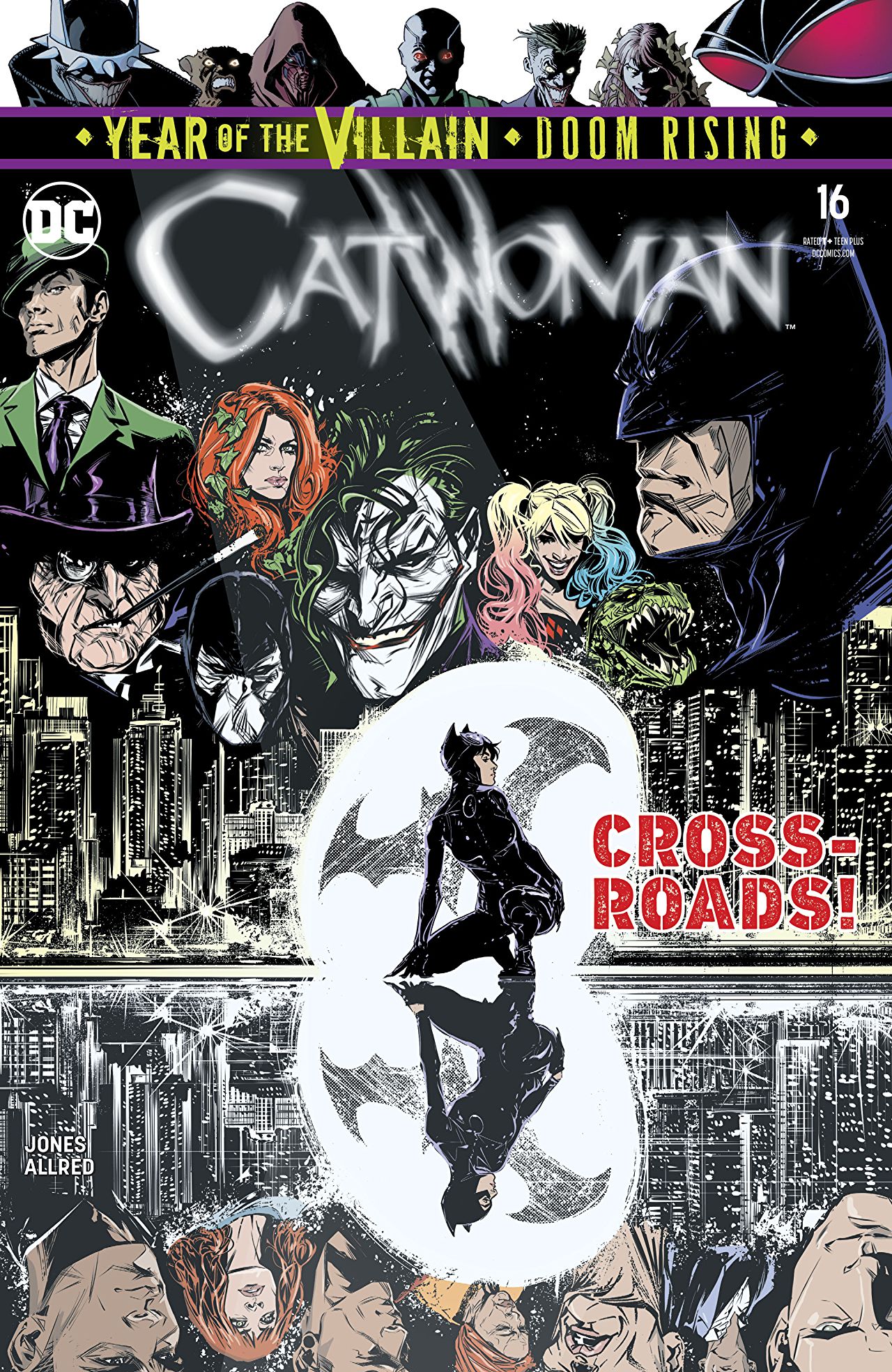 Synopsis (spoilers ahead): A defeated Catwoman lies on the ground, practically crawling, while Raina Creel gives her the classic villainous monologue of “you had it coming, you shouldn’t have messed with me”. They’re by a Lazarus Pit, Creel’s zombie army doing their work on Selina. They leave Selina there, on the brink of dying.

Cut to several weeks later, Selina is to a big mansion. One that, by chance, is hosting a child’s birthday party. A textbook blond rich bimbo – the mother of the birthday boy – answers the door, and with Selina enters a host of kids and clowns and parents and such. Nearly trampled, nearly out of her mind, Selina listens to the woman go on and on about how she’s not made for this. She’s got her eyes on her target though, Mr. Geddes, the husband – a textbook rich chauvinistic male. As he flees the party to his office, Selina is ready and waiting to jump on her prey.

While the kids in the garden try to crack a piñata, Selina tries to crack the man: she wants to know where Raina Creel is and her whip is not afraid of what she has to do to get what she wants. After much work – and not less pain on Mr. Geddes’ side – she gets what she wants.

After this action, we’re back to the Lazarus Pit. several weeks before. A Siamese cat appears by Selina, leading her into the pit. She enters it and, when she emerges, she is in the original Catwoman costume from Batman #1.

Analysis: This is one of those issues that you start reading and will immediately refer back to the previous ones to see if you are remembering the plot wrong. The opening scene comes a bit out of nowhere, with no setting whatsoever. No, you’re not crazy, everything indeed has happened off-panel. This can be a non-issue or a thrill killer depending on who is reading and how the plot is conducted from there. Me, for this one specific story, it became a non-issue after I finished reading. The reason? Joëlle Jones is back on art.

After a two-issue break, Joëlle comes back full power on what she does best: mesmerize us so much with how fluid her storytelling is that we let plot holes and convoluted structures slide. Yes, you will be questioning how in heavens Selina ends up in a Lazarus Pit, and how in heavens this particular fight went, but then Joëlle hits you on the face with her own particular mastery: drawing horror themes. The zombies that have been appearing in Catwoman have never looked so real and so intense and so incredible since she dropped art. To be fair, Joëlle went for all of her tried and proven themes for this issue: horror, gore, action and tongue-in-cheek humor with absurd day-to-day scenes. And she’s really, really good at all of those. Paired with Laura Allred, those two make a dream team when it comes to making the banal become unique. Especially in the action scenes, Allred’s red-tinged color scheme adds to Jones’ traditional parallel storytelling – two unrelated yet connected actions happening at once, one adding meaning to the other. That, with how dynamic and sharp her style goes for showing impact – a contrast to her usually fluid, almost water-like lines – make for an incredible action/torture scene. And thus, caught in the middle of shortened breaths and mesmerizing eyes, we as the readers are left with no memory whatsoever of the initial frustration with the plot hole.

Final Thoughts: We’re back with Joëlle Jones and Laura Allred on art and we’re back with a feast for the eyes. The entire issue feels like a particularly tasty candy given to you after a particularly painful dentist consultation: a lot of off-panel action leading to a lot of masterfully conducted action scenes. Jones is a wise dentist, though, and goes for all of her trustful equipment, using parallel action scenes, horror themes and the absurdity of the banal as tools that make this a great issue.