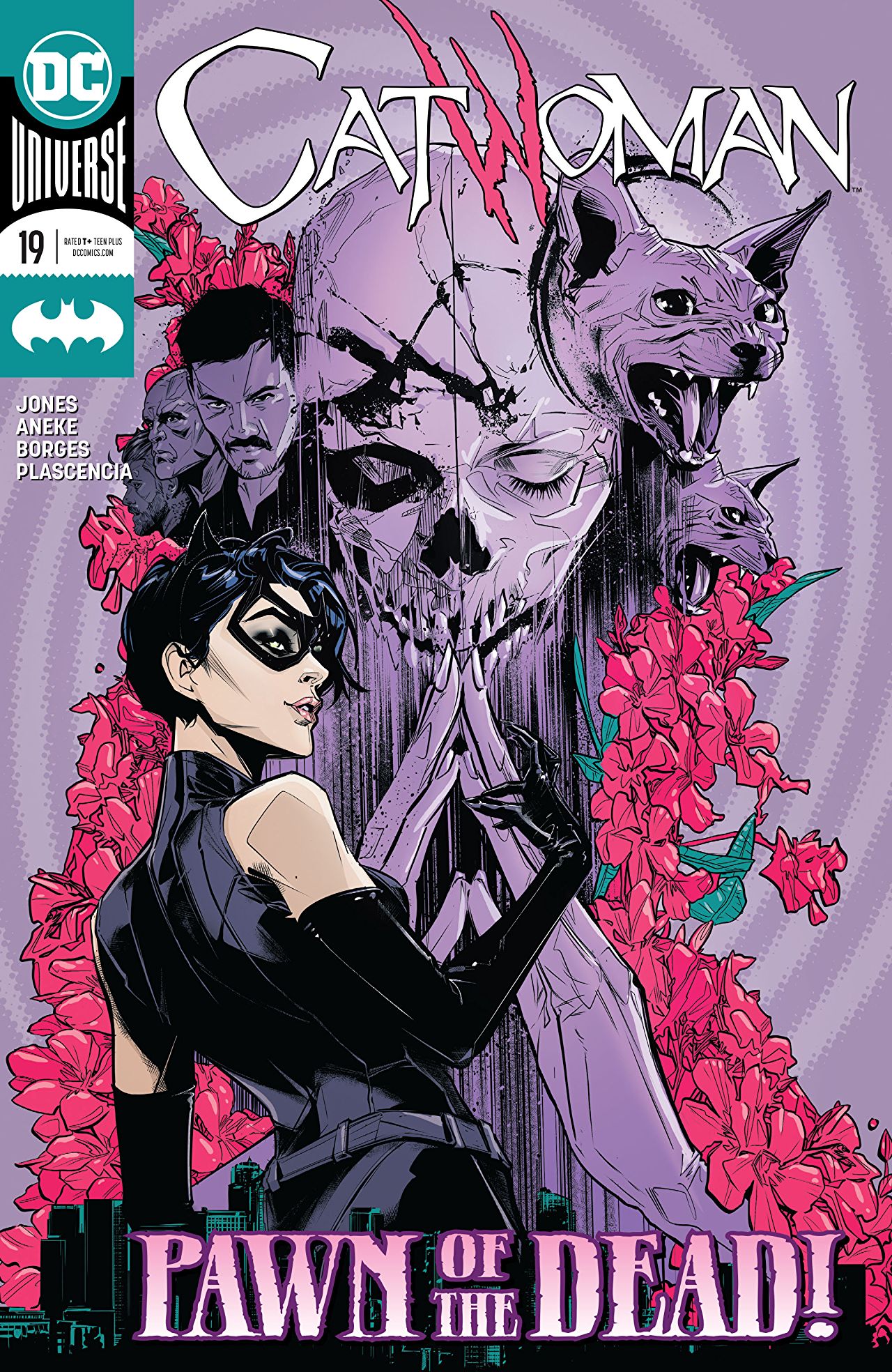 Synopsis (spoilers ahead): At Linda’s pawn shop, Carlos, alone keeping an eye on Selina’s sister Maggie, stands in apprehension as the newly-created zombies of Villa Hermosa make their way to the front door, looking for a way in. He does his best to comfort Maggie, telling her that her sister will visit her soon. As the inevitable seems closer than ever, Carlos hides Maggie in a closet and tells her he will return for her.

Meanwhile, Selina makes her way across the rooftops of Villa Hermosa, complaining about the lack of them in the city, all the while feeling compromised in her thoughts about her new home. She’s unaware of what’s going on at the pawnshop where Carlos is battling zombies that are breaking through the glass windows and door of the shop. With a katana in hand, he battles the intruders on his own. Selina, still in her thoughts as she makes her way to the rooftop across from the pawnshop, is initially oblivious to what’s going down below. As she realizes the shop is under attack, she springs into action.

As Selina joins Carlos inside, he makes it known that he is unhappy to see her despite her assistance. He makes it clear that he believes that everything that has been happening is her fault, that she ruins the lives of everyone around her when she’s not leaving them to fend for themselves. She responds by saying, “I’m here right now,” but this does little to satisfy her battle partner. The zombies have fallen.

As Selina retrieves her sister from the closet, an unexpected zombie sneaks up behind Carlos. Before it can make its move, however, it’s brought down by an electrical shock. Aunt Linda has returned. Unlike Carlos, she is happy to see that Selina has returned. Before the pleasantries could be extended, Linda goes silent. The zombie she just shocked is up, and it exacts revenge on the store owner by driving a pole through her torso. As Linda falls to the ground, Selina quickly dispatches the undead citizen of Villa Hermosa.

As EMTs arrive and work to help the fallen Linda, Carlos grows more frantic. Selina tries to calm Carlos down as the EMTs prep Linda for transport to the ER. Carlos erupts at Selina. He accuses her of treating them and their lives as a game, much like a real cat would do. As he heads towards the ambulance, Carlos looks at Selina one final time and tells her to go home. Selina is left on her knees, in tears, as the ambulance drives off.

At the Creel mansion, Raina sits in disgust, complaining about a remote that won’t turn on the numerous screens set up in front of her. As the screens finally flicker on, she explains to her entourage, who are still somewhat confused about the master plan, how everything happening, including the zombies that attacked the pawnshop and the waters of the Lazarus Pit, will give her everything she needs to get ahead and be the one loved by the people. She revels in the thought that she no longer has to hide behind makeup and be the loving wife of the powerful politician to get ahead.

As Creel stares at the screen, one of Raina’s cronies realizes that the zombie-fied Adam has gotten out and is roaming the mansion. Raina tells him to lock Adam up with the others until a better solution for keeping him restrained is found. As Adam is dragged off in disgust, Raina says that she knows just what to do. The story ends with Raina looking at video inside the pawnshop as Selina and Carlos tend to the injured Linda.

Analysis: A lot of questions. There seems to be a good bit of off-paneling in this issue. When we last saw Selina, she was with Zatanna taking out goons at the club. She was doing this donned in a classic Catwoman costume, the purple dress she wore during the Golden Age. This issue opens with her donning another throwback costume – the purple catsuit she wore during the 90s (my personal favorite). Not much is provided to explain the switch from one to another, and one can only assume that there’s a point to this. Hopefully, we get an answer in a future issue.

The story itself is pretty good. It was a very quick read, and I was done reading before I even noticed. Sometimes this works and at other times it doesn’t. For this issue, the quickness works, primarily because of the action with Selina and Carlos battling the zombies inside of the pawnshop. Joelle Jones didn’t drag it out longer than it needed to be. What was also nice was that you get very little of Raina Creel in this issue. I have never been a fan of the character, so the fact that only the last few pages of the issue features her is perfectly fine with me.

On the other hand, I was not crazy about the art at all in the beginning. It just didn’t sit right and didn’t seem like the typical work you would see from this series. On second reading, however, I gained a better appreciation for what I was looking at (outside of Raina Creel, of course). That scene of Selina on her knees as the ambulance carrying Linda and Carlos drove off, and the tears that followed, said a ton without saying any words at all.

Final Thoughts: One continuing question I will always have as I’m assigned this title is how much juice it has left in it. Most of the Bat-books are in sync with the greater Batman Universe and specifically life post-City of Bane. At some point, Selina Kyle needs to finish her business with Villa Hermosa and come home.