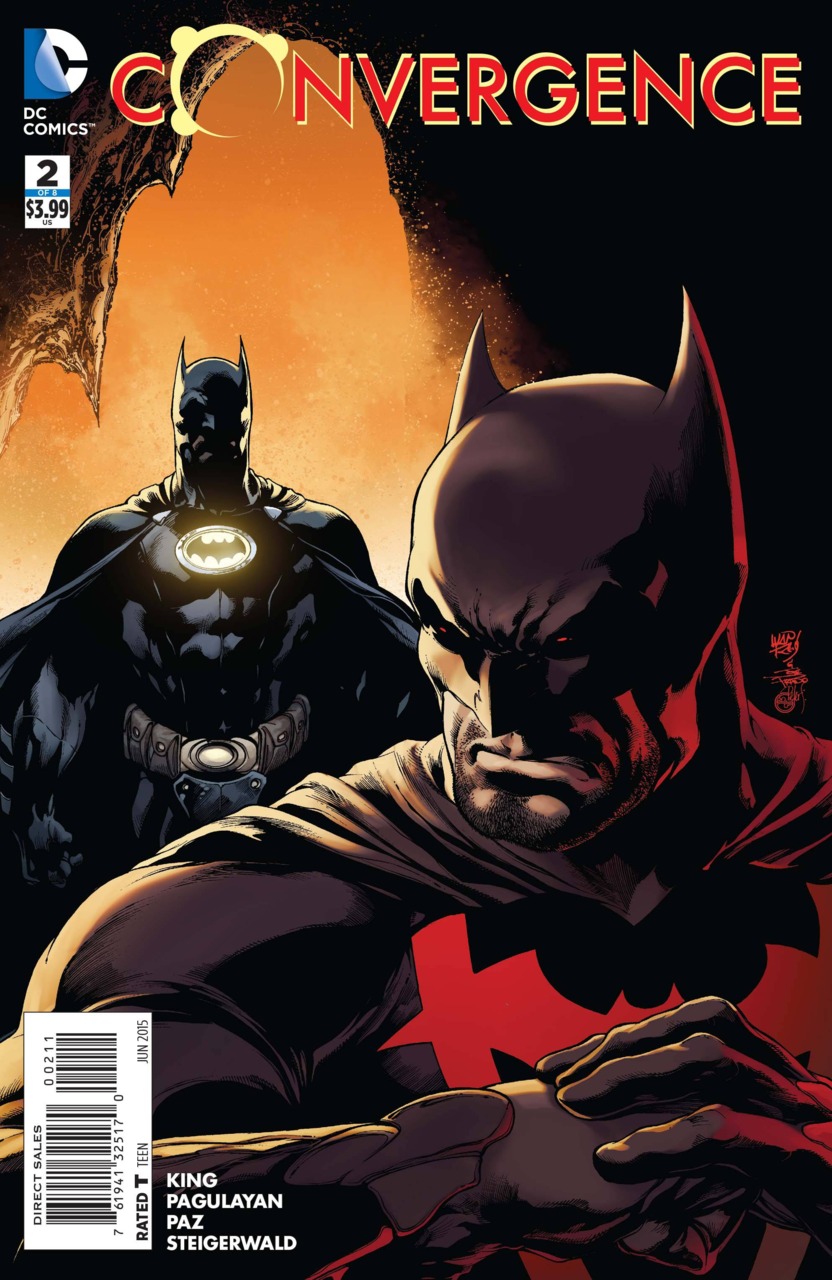 The inhabitants of Earth 2 continue their struggle in issue #2 of Convergence. In the beginning of the issue we see just how exactly the E-2 team was plucked from time and space by Telos after they escaped the Earth in their battle lost against Darkseid. Telos finds out that some of the other cities will be insolent in his request that they fight each other so he coaxes them into fighting while the E-2 inhabitants look on. Alan Scott then uses his power to try to connect to the planet and destroy the planet incarnate but he quickly realizes that that is futile. Superman then takes the fight to Telos only for the Demi-god to retreat in what Alan Scott senses was fear due to their being a ruined city below ground. As the Flash and the others scout ahead of where they are standing right now, Batman and Dick Grayson travel to the Pre-Flashpoint Gotham City in order to find this Universe’s Batcave and subsequently run into Alfred and a Batman Inc. Bruce Wayne. While Dick and Alfred talk to each other and the former narrates the issue, Thomas and Bruce emerge from the Manor and have to leave. Alfred gives Dick a uniform to wear and Bruce gives Thomas keys to the batmobile. Alfred remarks how some things never change across all universes and as they leave Bruce hangs his head in sadness as even in a world where his father survived there was need for a Batman. As the Flash and Green Lantern scout the surrounding terrain, GL picks up what looks like a Court of Owls mask and remarks about how whatever happened in the war zone they are walking through it feels somehow familiar. As drones then attack them the Flash runs into Deimos, the Atlantean villain.

The Court Of Owls mask seems kind of ominous. Just speculating but could the ruined city underground be the New 52? I know that would create issues for sure as we in Future’s End saw Brainiac fail to take that world. My other guess is I wonder if it is Kryptonian in origin. Could Brainiac’s new masterplan have been finding a way to save his Krypton and that is why he is studying the ends of universes?

The fact they actually showed what happened after escaping E-2 cleared up one of my chief complaints of the last issue and the ending of World’s End. It is still a little murky just how Telos does what he does but what has been explained so far has made it a little less frustrating. I think that the biggest mistake of this series so far is making the main characters ones from a book that I am sure a good percentage of people who read DC comics haven’t actually read. Especially when Future’s End was the book everyone was looking to more or less to be the lead in for Convergence. It wasn’t until a few weeks before this series started that writers really started nailing home that everyone should have read Earth 2: World’s End.

On top of that I don’t think that this is what a lot of people signed up for. People wanted to read this story because we thought we were going to get the Pre-Flashpoint Universe if even for just a few issues. So far aside from the meeting between Thomas and Bruce (more on that in a second) there has been no evidence of it even playing a factor within the spinal book of the line wide crossover. I think this series would have been better off having the Pre-Flashpoint JL thrust onto this strange world in place of this new and strange Earth 2 gang. And this is coming from someone who not only has read Earth 2 but also adores the hell out of it.

Now when I first heard about this series in particular, I jumped at the chance to review it for the site. I misread the solicitation and thought that the Flashpoint Thomas Wayne and the Pre-Flashpoint Bruce Wayne were going to meet. I was pumped because, wow, let’s be honest that would have been an amazing payoff after the ending of Flashpoint that everyone would want to see. But alas what we got was the Earth 2 Thomas Wayne meeting Bruce instead. And then that meeting happened mostly off screen.

And. That. Is. FRUSTRATING.

I don’t know about you but it seems like King is incredibly keen to makes things happen off panel and then explain just how or why they are happening later. It’s a common trope of writing. I get it. But everyone opened this issue licking their lips for a meeting we didn’t actually get to see. Does what the two have to say to each other need not be said? I personally don’t think so. A lot of the time when writers do things like this I feel that they think anything they could actually say on the page would be reductive. And I feel if that indeed is what they think then they shouldn’t be writing the book. I honestly hope that these two either meet up again on panel or we get shown something within their conversation later that comes into a key play in the game that is this story.

Overall this issue moved things along further than both of the previous issues so that is progress at least. With six issues to go let’s hope for the best and for Telos’s sake let’s see some of the World’s we were promised!