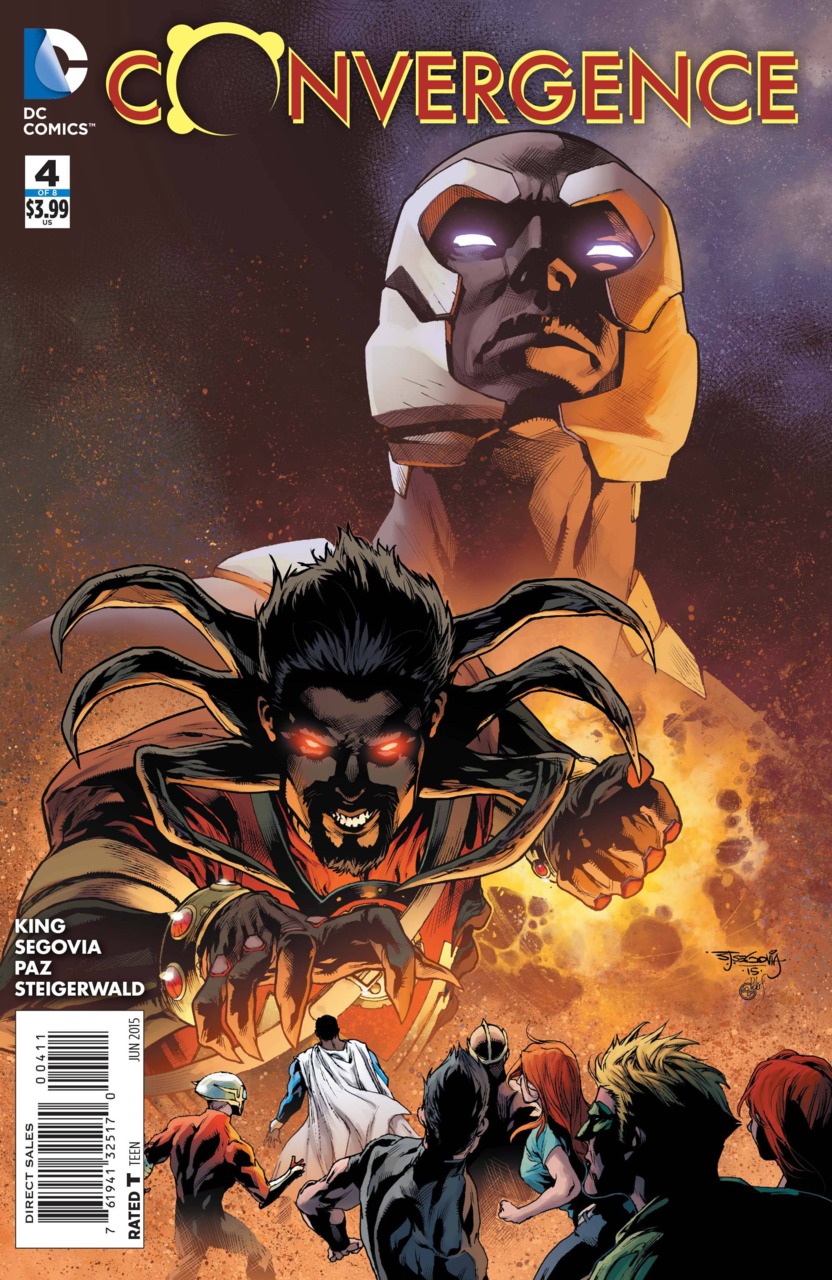 The aftermath of the Death of Batman and the fate of our heroes as they enter Skartaris is revealed in this incredibly revealing and satisfying issue of CONVERGENCE. The issue opens up with Telos narrating the scene for us of Dick Grayson fighting along side Batman to give the others times to reach Skartaris. He then reminds us of the plot of the story in recapping that there are other cities and various versions of characters out there fighting for survival. It is that same survival instinct that makes Telos pretty much take Dick in as his pet in this issue and helps mend Grayson’s back whilst trying to convince him that he isn’t their to kill him but to save him and all the others.

Team GL and Deimos begin to fight the forces of Skartaris in order to find the weapon that can take down Telos. Yolanda remarks how the red on this planet is awkward because of the realm in which they are in. Deimos quickly slips away from the group using the fight as a diversion. Superman can no longer hear his heartbeat which sends up a major red flag. We are then taken to a scene where Shakira remarks to the prisoner time travelers that if they fight for The Warlord they will be released. They refuse remarking that whoever this Warlord is he is wrong about how time works.

While Telos shows Dick the many other worlds battling it out in order to survive Dick finally seems to be getting through Telos about him not only being sentient being free from Brainiac’s commands but that he indeed is wrong for making the other domed cities fight one another. Telos again rebuffs Dick’s claims and says Grayson should worry about fighting for his son. He senses Team GL under the earth’s crust and begins his search.

Deimos is then tracked down by Yolanda, Avatar of the Red from Earth 2. He quickly dispatches of her before finding Shakira and the trapped time travelers. All of the subplots “converge” as Demios and the heroes of Earth 2 fight Telos directly in Skartaris. It is then revealed that Telos’s plan all along was to release Brainiac from the prison he was put into in Future’s End by Ray Palmer. Brainiac tells Telos whatever he wants will be granted as long as he frees him from orb.

This issue was what Convergence should have been about from the beginning. Even though it still feels so contrived that the Earth 2 characters are somehow the main players of this book, King is really starting to show us that he isn’t out of his mind and that this story may indeed have an immense amount of worth. This kind of action is where we need to live in for something this massive of a scale to be worth it. After reading Convergence: Booster Gold it made this issue even better because we are finally starting to see not only payoffs but the very scope of things that happened all the way back in the Future’s End Sept. events, the ending of Future’s End itself and World’s End. I now see why aside from it being timely that this series is 8 issues long. We may have gotten off to a rocky start but don’t give up this book yet because I promise you this is where things are going to kick off. You should also do yourselves a favor by reading Justice League #40 because all of this is connected in one way or another especially if you are struggling with understanding the scope of why all these worlds are converging in the first place. I know that it may seem frustrating that this spinal series of Convergence seems so inaccessible but you will find that reading all of these stories I tell you to will give you an immense appreciation for this story.

It is interesting that Dick almost convinced Telos to rebuff his programming and fight against Brainiac. I am incredibly interested in seeing just what will happen once Brainiac returns and finds that his spawn has let all of these heroes loose. There is going to be hell to pay. Hell to pay indeed.