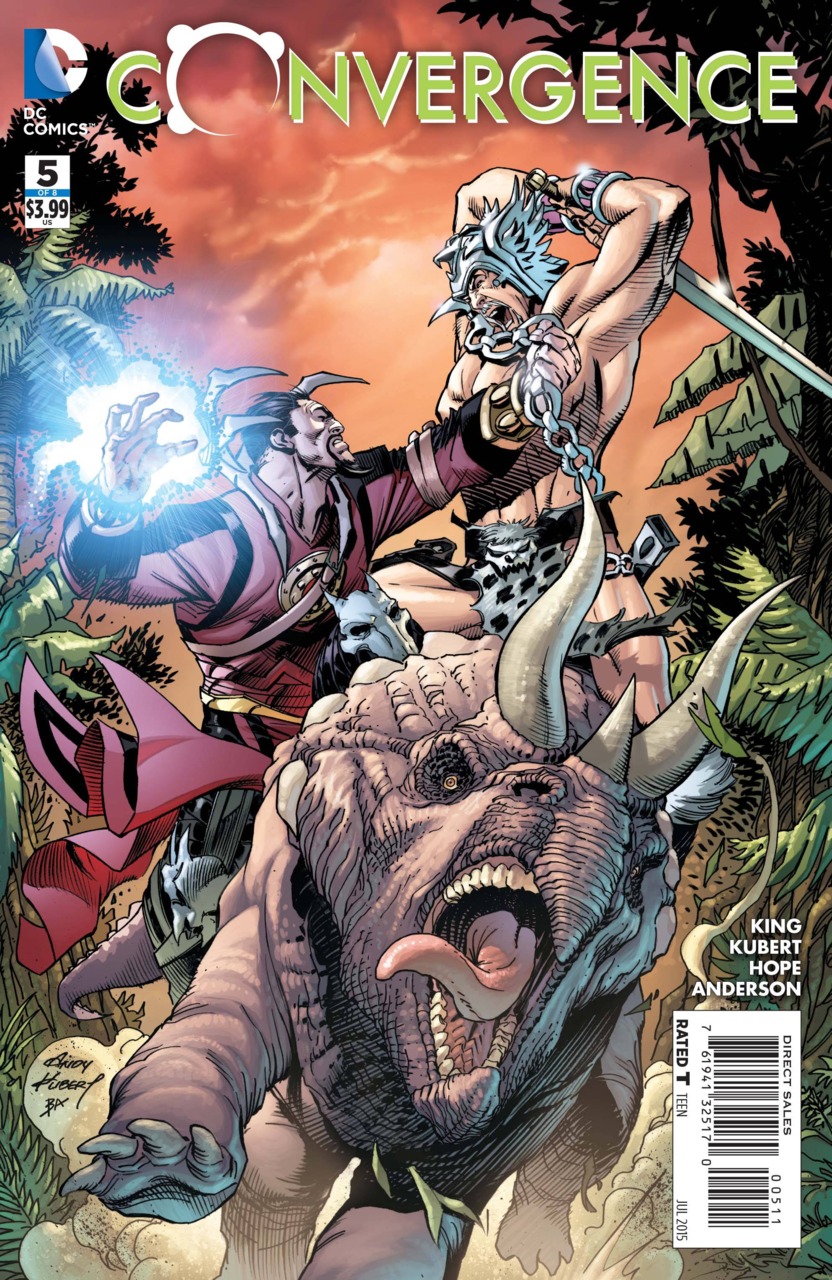 Convergence rages onward following the cliffhanger from the last issue of Deimos possibly having the power to release Brainiac from the prison he was put in during Future’s End. As Telos looks in horror at the fate of his father, he demands his release. Deimos however explains that Telos’s loyalty has been misplaced and by stealing the power from the Time Masters that have been imprisoned in Skartaris he knows that Telos may not indeed be what Brainiac has led us to believe. Deimos then shows Telos and us the readers a possible origin for Telos in that he is not a creation of Brainiac but he is infact a man that sold himself into Brainiac’s service in exchange for his families safety. His planet was then prepared for the Convergence that we are now witnessing.

Dick Grayson who in a previous issue got to know Telos first hand realizes that he is exactly like the Earth 2 survivors in being the last of his race and believes that Telos could be the key to end the bloodshed upon the blood moon.

There is then a sidequest that I have failed to really touch upon in my other reviews for this book because it has seemed rather inconsequential in the Warlord racing towards the castle which inhabits our heroes at the moment. I am proven right because while the Warlord reaches his destination he is quickly dispatched by Deimos with little to no effort at all.

We do however finally get some action from the Earth 2 team in Superman taking the fight straight to Deimos. Brainiac over and over again tries to get a Telos who is going through an identity crisis to kill his taunter in Deimos. At this point with Superman taken down, the E-2 group debates whether to release Brainiac but Deimos stops them in their tracks severing the link they have with him permanently.

With that action the Castle begins to crumble around our heroes and yet another clue to what this planet may or may not be is given in the fact that Dick Grayson finds a mysterious batarang and he definitely alludes to the link that Batman and Dick Grayson share across all timelines. If subtlety were a sledgehammer than I suppose it’s subtle that Dick Grayson is definitely going to be the new Batman in Earth 2: Society pending that he survives Convergence.

Deimos then kidnaps Yolanda and brings him to Brainiac’s inner sanctum where presumably he and Telos operated the domes. He calls out to all of the warring cities on the Bloodmoon that the time for fighting is over and that he will be there protector for a price that is yet to be named. We end on all of the cities hearing his message in confusion.

::Sigh:: This story is dragging. We litertally moved NOWHERE in this issue just like we moved NOWHERE between issues 1-3. I honestly don’t know what DC is trying to accomplish with this story. I am perplexed. Why bring Brainiac back into the story just for a cameo if he was the entire hook for the story in the first place? We wanted to see the heroes vs this SUPER-Braniac being. And I understand that this is a celebration of all DC history but using beyond obscure characters within a bulk of the story has got to be the biggest misstep of this series aside from making your lead heroes characters that haven’t rightfully earned their place in carrying a book outside of their own tailor made series. That isn’t even to say that those characters are bad. I personally have loved Earth 2 and it has been amazing how well it has worked without Clark Kent, Diana Prince, and Bruce Wayne.

At this point I honestly think that Jeff King may be the only person in the room that thinks this story is actually any good or actually comprehensible. And it also makes me wonder if there was actually anyone in said room because of the move from NY to LA at the DC Offices being the reason this story exists anyways.

I want to love this story. I really do. But right now it has me wanting to bang my head between my laptop fold.