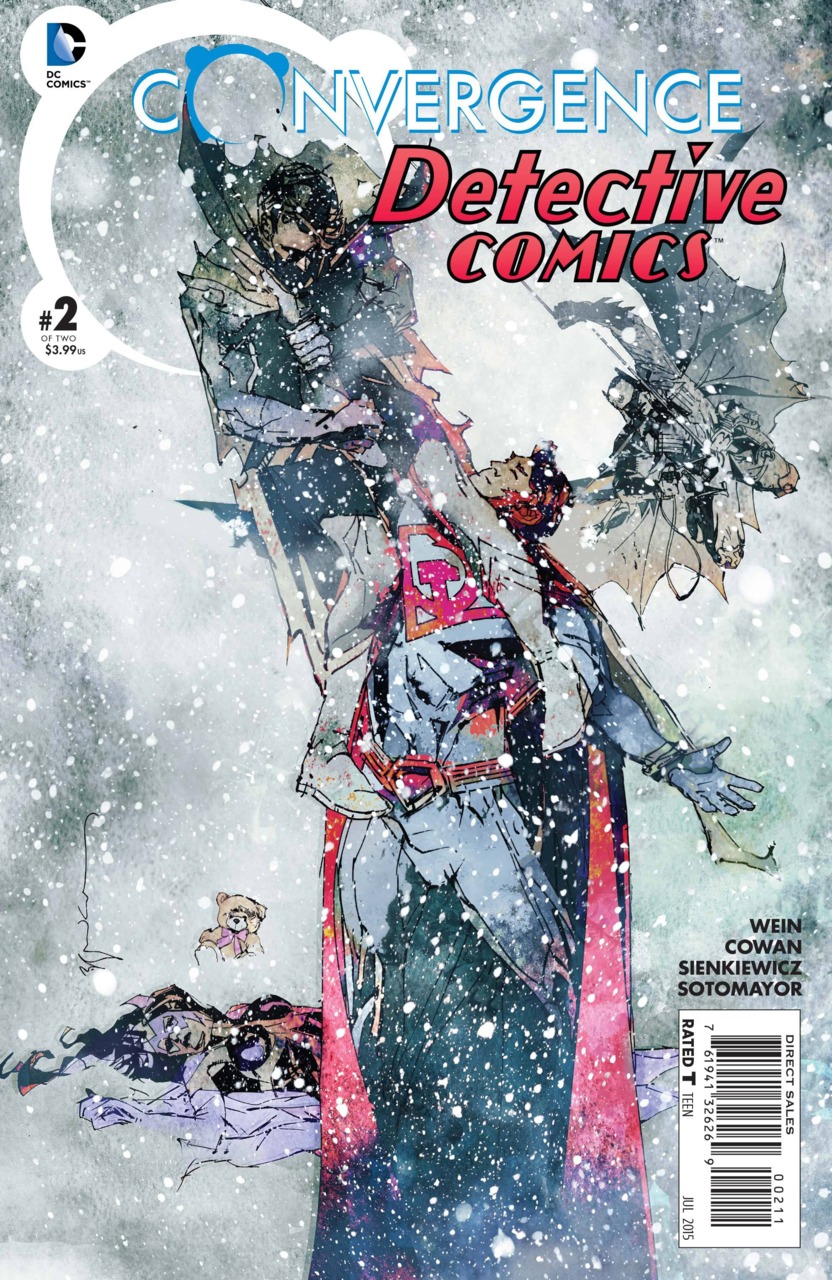 “War and Pieces” begins with a two page recap of the previous issue which I did not think was necessary. We revisit the year under the dome for both Metropolis and Moscow with more of an emphasis of the final confrontation between Robin and Huntress and Superman. Here I see what I believe is a continuity error. In the last issue Robin was still in the Batmobile when Huntress fired the rockets at Superman. In this issue Huntress does not fire on Superman until after Robin is outside of the vehicle and talking with Superman. I did not like this error.

Finally on page three, we see Superman flying with Huntress in his arms. He apparently saved her before the Batmobile exploded. Superman is now searching for Robin who has retreated to determine a way to rescue Helena. Apparently he does not think she died in the explosion. Superman finds Robin quickly and now Robin appears to be ready to fight even though Superman still wants to talk. Robin makes his second switch in motives as now he is ready to talk again. Huntress regains consciousness and draws her crossbow on Superman. Superman is still pleading that he is not the enemy. As the standoff continues we see a glass globe bounce in and explode filling the air with lead flake infused smoke. We see the Red Son Batman appear on the scene and leaps off with Robin and Huntress with him while Superman is temporarily blinded. Huntress floods Batman with questions as they escape and they do before Superman is able to clear the air.

The three hold up in a lead foil lined hovel in Moscow. Huntress continues with asking questions as to the identity of this Batman. Batman describes briefly his fight in Russia and Huntress reveals that she is the daughter of her Batman and Robin is his adopted son and partner. Huntress wants Batman to remove his mask which he immediately does admitting that he does not even recognize his own face anymore. Helena responds that she does and adds a “thank you” spoken in Russian with a tear down her face. She sees this man is Bruce Wayne of another reality and he looks like her long dead father. Robin finally speaks up and asks why Batman is doing what he is doing. Batman responds that he has to because someone must balance the threat posed by an all powerful being. Huntress immediately wants to help Batman take down Superman. The three are interrupted by government helicopters searching for them. Either Dick or Helena tells Batman that they are willing to help Batman bring Superman down. I am unclear as to who is saying this, in this panel we only see a shot of Batman we do not see who is saying this line. Batman says that the rules are clear, Robin and Huntress are the ones charged with bringing Superman down and not him. Before he leaves he hands Dick a box saying that they are going to need this. Batman leaves to draw the government fire from Robin and Huntress. The two move out and are quickly spotted by Superman.

We cut to a construction site where Robin and Huntress are held up hoping that with the metal around Superman will fail to find them. They are not as lucky as we see Superman make an appearance. Robin throws batarangs at Superman while Huntress draws her crossbow. Superman crushes the batarangs and Huntress’s crossbow bolts have little effect on Superman’s chest. Robin throws a flash bomb grenade which Superman catches and crushes with his hand. Huntress and Robin both go in to take on Superman in hand to hand which does not go well for the pair. Superman still wants to talk the situation over. Robin removes the box Batman gave him revealing that it is kryptonite dropping Superman who has never seen the substance before down to his knees causing him intense pain. We see a panel of a skeletal superman with another error as the dialogue bubble points to Robin standing over the stricken Superman and not Superman who is speaking the line asking for mercy.

Robin holds the box over Superman while Superman begs for him to take it away. At first Robin is resolved to kill him with Huntress goading him to keep the attack up; Superman is getting what he deserves. Robin is shown throwing the box away saving Superman, he cannot kill. Huntress believes Robin is out of his mind. Robin was raised by Batman who does not kill and neither will he. Superman stands up with a chorus of Muscovites behind him chanting that Superman should kill Robin and the Huntress. Robin promises to go down fighting but Superman will not give in to the crowd, he will not kill them. He sees them as noble; they were willing to die but were not willing to commit murder. The two shake hands declaring the battle to be a draw.

We hear what can be assumed to be Telos declaring that the rules have been defiled and that there will be consequences. All we get is the earthquake we have seen in the previous issues of this second month of Convergence. When the quake is over Robin and Huntress find themselves back in the Metropolis Batcave.

From the caption box we see that the two drive back to their Gotham across the alien landscape. It appears that both the Earth-2 Metropolis and Earth-2 Gotham City were both taken by Telos and transplanted onto this alien world. Helena admits to Dick that she was acting out of character. She was acting impulsively and violently. Their conversation is interrupted by the bat signal in the night sky. Both suit up, Helena as the Huntress and Dick, not as Robin but as Batman. Dick admits that meeting the Russian Batman made him realize that the Batman is not a man but a symbol for others to rally around. Dick cannot be the Batman Bruce Wayne was but he can be the symbol. The two race off into the night in the Batmobile.

I did not like this issue as much as the last issue.

I was not fond of the art in the first issue but I got used to it and it was not a problem with me by the time I ended that issue. This issue even though it is the same gritty style as the last issue, I could not get into it at all and coupled with the error is the dialogue bubble I mentioned earlier, took me out of the story.

I did not like the two page recap in this issue, especially with the continuity error in the end. This was only a two issue arc and I have a hard time believing that new readers will be picking up this last issue without knowing what happened in the previous issue. It is noted that in the three previous weeks of this last month of Convergence, I did not see this type of storytelling at all in the other miniseries. This decision removed two pages from the current story.

Huntress continued with her out of character responses as in the last issue. It was good that at the end Helena did admit that she was acting out of character but there was no explanation as to why, the conversation was interrupted by the bat signal and the focus shifted abruptly.

I felt that Robin was not characterized well in this issue. He completely flips his position a number of times from wanting to fight Superman to wanting to find a peaceful solution. He does not say anything to the Russian Batman until the end of their meeting. How did this Batman inspire him to want to finally put on the Batman suit at the end? I understand that this was more for Huntress and Batman but he should have had his own questions as well but instead just accepts things and only enters the conversation when it is time to find out what they can do to help take down Superman.

The only character that was steady and constant throughout this issue was Superman. He never attacked Robin and Huntress offensively. Instead, he only used his powers defensively even to the point that when given the chance he did not move in to kill the pair.

I was disappointed in this closing even after the strong debut of the previous issue. I liked the arc of Huntress with the Russian Batman but there were still too many questions left open in this the conclusion of the Convergence event. How does this affect the Crisis on Infinite Earths if it even happened at all?