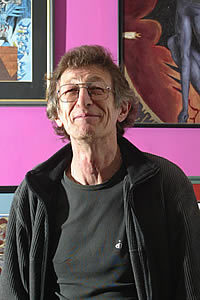 Welcome once again, my bat brothers and sisters to Creator Spotlight. Zach here as usual, and this time I will be admiring the prolific and underrated career of the writer Alan Grant. So join me as we take a trip down memory lane and look back at the Scotsman’s career. Enjoy:

Alan Grant is a long time comic book writer, who surprisingly is often mentioned when talking about some of the “great” Batman writers of the last 25 years. Other than Batman, Grant has also worked on a number of other characters including; Judge Dredd, the Demon, Lobo, L.E.G.I.O.N, and many strips in the 2000AD line. Grant’s Batman work is often heralded by fans, but often forgotten by others. Grant’s key Batman works consists of storylines such as; The Last Arkham, Batman: Anarky, and Batman: The Scottish Connection. Additionally, Grant has often co-written several Batman main events; The Knightfall Saga, Batman: Contagion, Batman: Cataclysm, and Batman: Prodigal. Grant has also co-created several Batman villains, who appear in the comics today. These characters include; Victor Zsasz, the Ventriloquist (Arnold Wesker), Anarky, Jeremiah Arkham, Cornelius Stirk, the Ratcatcher, Legs, and the unforgettable Amygdala. Alan Grant is often linked with longtime friends, creators John Wagner and artist Norm Breyfogle.

Alan Grant broke into comics in 1967, when he was hired as an editor for the publisher, DC Thompson. Grant left DC Thompson in 1970 after moving and going back to college. It was here that Grant would meet writer, John Wagner. The two formed an instant friendship and began co-writing Tarzan, and later, Judge Dredd in the weekly magazine; 2000AD. The pair continued to write together for much of the 1980s. After much success in the European market, the two decided to try out American comics. They quickly found themselves working at DC Comics and began writing a 12-issue series titled, The Outcasts. The two gentlemen found themselves working on Detective Comics. This title also marked the beginning of Grant’s often collaborator, the vibrant artist, Norm Breyfogle. The trifecta began with issue #583, a story title; Fever. Issue #583 would also mark the first appearance of the Ventriloquist. Wagner would later leave the title, giving Grant the lead. Together, Grant and Breyfogle would take the Batman Universe by storm.

While on Detective Comics, Grant and Breyfogle would continue to electrify fans until #597, where Grant would leave the title for a short time. Breyfogle had already departed following issue #594. However, the pair would return shortly with issue #601. They would continue to work on the title until #621. Throughout their run on Detective Comics, many unforgettable storylines were written and penciled, including; The Mud Pack, Anarky, and Rite of Passage. Grant and Breyfogle would later return to the title, but not together. All together, Grant wrote 39 issues of Detective Comics.

Following the success of Grant’s work on Detective Comics, Grant and Breyfogle would once again reunite to launch a new Batman title; Batman: Shadow of the Bat. It would be here within the pages of the first issue, that Grant would introduce one of the most mentally deranged characters into the Batman’s Rogues Gallery, Victor Zsasz. Along with Zsasz, Grant would also introduce Jeremiah Arkham in the four-part story arc titled; The Last Arkham. Grant would leave the title, but would frequently return to Shadow of the Bat. Grant would have a hand in writing the Batman: Cataclysm storyline that would also appear in the title. Shadow of the Bat would run for 96 issues and Grant wrote a total of 36 of them.

Unfortunately, Grant was never given the opportunity to work on the main Batman title, but he often appeared in other various Batman related comics. Grant also wrote a collection of various Batman one-shots that include; Batman/Phantom Stranger, Batman/Judge Dredd Files, Batman-Lobo, Batman/Daredevil: King of New York, and the Batman of Arkham, among others. I think it is safe to say that Alan Grant was the “Batman” writer of the 1990s. He made major contributions to the mythos and should be greatly acclaimed for his work. In my opinion, Grant seemed to be ahead of his time. The characters that he created seem to be more frequently used today then they were back then. He wrote grounded stories that were rooted in the realism of Batman.

Well bat-fans, I hope you enjoyed a watered down look at the enormous career of Alan Grant. Be sure to look out for the next Creator Spotlight, which will focus on Grant’s often partner in crime, Norm Breyfogle. Tune in next time, Same Bat-Time, Same Bat-Blog.