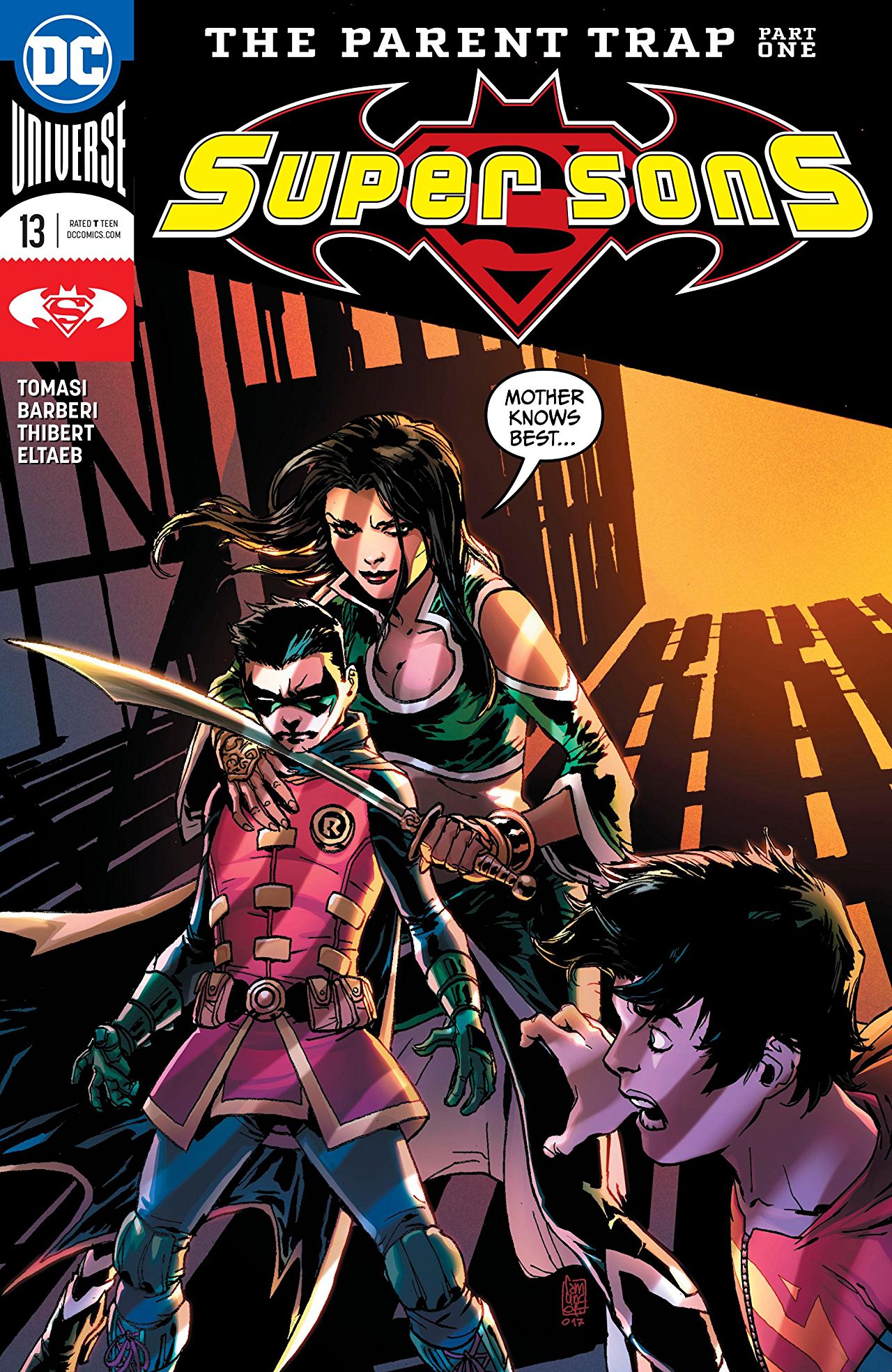 Overview: Just as Jon and Damian start to get accustomed to school, Talia al Ghul shows up demanding Damian join her. After his refusal, Talia goes after someone close to the family.

Synopsis (spoilers ahead): Opening on a kickball field at West Reeve School, Jon is engaged in a heated game with a fellow classmate. They bicker about whether or not he had been tagged out when the bell rings. Jon excuses himself to meet Damian at the entrance of the school. Arriving by helicopter, Damian tells Alfred, apparently the 14th day in a row, that Bruce will pay for putting him in school. After a witty retort, Alfred takes off. Jon is still amazed by Damian’s mode of transportation.

As they walk into school, Jon reminds Damian that he will be staying at Wayne Manor while their fathers are with the Justice League and Lois is chasing a story. After a number of classes, Jon finds Damian on the bleachers during recess. The two begin to talk about Damian’s “people skills” but are soon interrupted by Talia al Ghul who is there telling her son return to the League of Assassins. After promptly refusing Talia’s demand for Damian to help her on a particular mission, she threatens the release of Bruce’s identity but otherwise seems confident he will return to her.

After school, Jon and Damian suit up from their underwater HQ in Morrison Bay then proceed to Metropolis to track some assassins that Damian has found in the city in the hopes they will lead them to Talia. Jon still expresses his surprise at Damian’s dark past.

After beating up a few assassins and arriving at their temporary headquarters, the boys discover that Talia’s target for her next mission is Jon’s mother, Lois.

Analysis: As the start of a new arc, this issue does its job at introducing some tension and stakes. Although the issue itself did not have anything entirely memorable admittedly, it was a fun read with humor and great artwork. Although this amounts to a lack of character depth, it is a solid set up for the arc.

With the opening of Jon in school, we already get to see him just being a kid which is always nice and a source of levity amongst so many darker stories in the universe. Having Damian show up and acting pompous only adds to the humor. Tomasi once again proves to have a great understanding of these characters. His dialogue between the pair certainly has its superhero jargon but, at its core, the conversations are those of two young teens butting heads and trying to solve problems.

The artwork was a major plus in this issue. Carlo Barberi’s pencil work did a fantastic job at capturing the little emotional aspects of both Jon and Damian so you feel as if you are watching them onscreen to some degree. Every facial reaction feels real and captured perfectly. Complementing the great pencil work was inks by Art Thibert and colors by Gabe Eltaeb. Stories centered on the sons of Batman and Superman should be relatively light-hearted and the tone that Eltaeb brings with his coloring solidifies that.

As I said earlier, little character development occurs but not really expecting that makes it a minor issue. Some things like Talia’s amazement at “how Bruce has changed their son” feels a little worn out as a story or plot point but having Jon ride shotgun in this type of story could result in even more progression in the boys’ friendship/partnership.

Final Thoughts: Overall, some humor and great artwork help to make this opening issue of the Parent Trap arc an entertaining one.