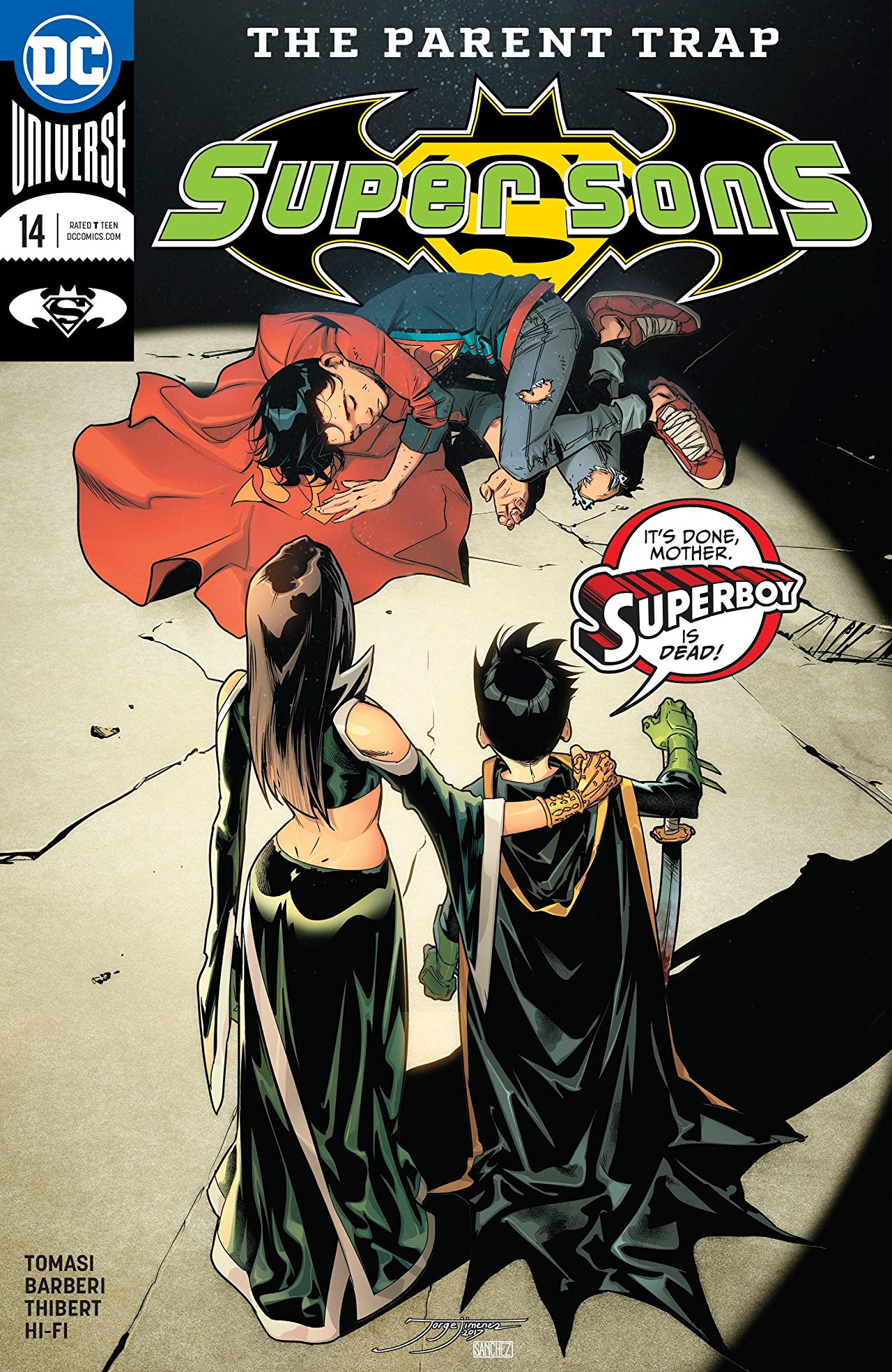 Overview: Robin and Superboy track down Lois Lane in order to stop her assassination at the hands of Talia al Ghul. Robin is able to defeat his mother and begins to forgive himself for his violent past.

Synopsis (spoilers ahead): Picking up shortly after Talia threatens Lois Lane in the previous issue, Superboy and Robin race to Gotham to try and save Lois from her potential assassination. Meanwhile, Lois is in a cafe with a source trying to get the scoop on a recent politician/big business scandal. While the women sit down to coffee, Talia is seen on the opposite building’s rooftop with a sniper rifle aimed right at Lois.

The boys call Lois in a frantic attempt to triangulate her position. In a very nervous and awkward fashion, Jon manages to keep Lois on the phone long enough for Damian to pinpoint her location. Just after pulling the trigger to draw Damian into the fray, Jon speeds across the bullet’s path and stops it. His triumph is short-lived, however, as he finds himself surrounded by ninjas. The group attacks him and some other civilians.

On the rooftop, Damian attacks Talia and continues to deny her repeated requests for him to join her in the League of Assassins and no longer follow Bruce’s code. Damian is able to get the upper hand but hesitates from taking the killing stroke to which Talia disarms him. She is not able to make another move as Superboy then drops a bundle of unconscious ninjas at her.

Damian allows Talia to run and tells her not to return. She still insists that he can’t escape his destiny as the future head of the League of Assassins. The issue closes with Jon telling Damian that they are friends and to not blame himself for his violent upbringing and past. The issue ends with the pair walking away and Jon begging Damian to teach him how to be a ninja.

Analysis: Although a pretty short Damian-focused story, I thought these two issues helped to strengthen the friendship between Damian and Jon while also giving us continual growth in Damian’s character. The artwork here was solid as it has been in these arcs. Although not really teasing at any kind of future arc with this one, these stories continue to keep me wanting more Robin and Superboy adventures.

Regarding the story itself, it was not very complex or even have real “meat” to it being only two issues long. The dynamic between Jon and Damian being rebellious child heroes lends itself to shorter story arcs, so I am not really complaining as the creative team is able to weave in playful and juvenile moments into the story while also giving some solid character development for the little blue Boy Scout and the mini/future Dark Knight. There are some genuinely funny moments like Superboy saving Lois in public and coming across as a very much scared son hoping to escape parental punishment. There are also deeper moments seen in this issue where we see Damian learning to forgive himself for his violent upbringing. It’s something that shows he is maturing and becoming more adjusted to the real world with friends and connections.

The artwork was very good in this issue. I really feel like Barberi is able to depict both young heroes correctly. He gives them a visible youthfulness that helps to set the tone for these stories as more lighthearted than those of the characters’ fathers. The only minor issue I had with the artwork was how the adults did not appear to be much older than the children. It’s just a style of the artist from what I can tell, but seeing Talia look only mildly older than Damian was a little jarring. Overall though, I liked the action sequences and the general tone set forward by the art team.

Final Thoughts: Overall, the art was good and despite being a shorter story that wasn’t too complex, if offers character development and moments of humor.