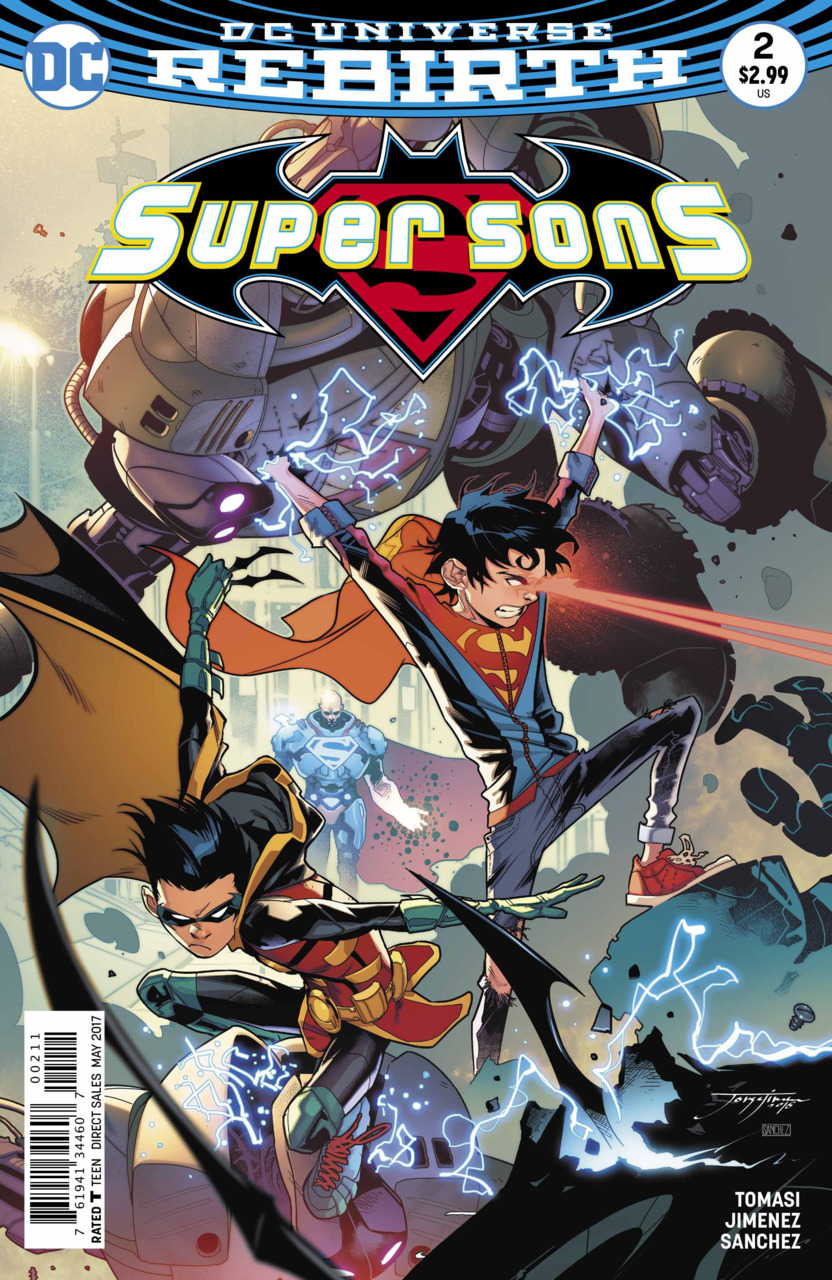 In Brief: Robin and Superboy lead Lex Luthor on a merry chase and find clues on who has been breaking into LexCorp.

Summary: Following the same structure of the previous issue, we start off with the family in the recording studio. In there, the kid who is revealed to be Kid Amazo murders his family and flees from the scene. This whole altercation takes only two pages. We are then greeted with an amazing full-page showing our boys where we were left off in issue #1: getting caught while trying to break into LexCorp. In true Robin-esque banter, Damian throws one of the best lines in this issue at Lex “All that power and you still can’t cure rampant alopecia, Super-Lex?”. What other kid in the world would even know what alopecia is?

Robin then uses Superboy as a distraction, throwing him off the building for Lex to catch him, while he enters the building and proceeds to hack into LexCorp’s database. Meanwhile, Jon is using all of his nonexistent talent for deception to try to get out of Lex’s grasp. The bald man doesn’t fall for it, of course, and takes Jon to the lab where Damian has been planting explosives. Lex destroys the device that Robin is working on only to realize there are eleven more. Robin and Superboy take the chance to flee from the building.

Back in safety, Jon is enraged with Damian for putting them in trouble. Damian reveals that those were fake explosives, and that he had successfully hacked into LexCorp’s security system. While Robin goes through the security feed, Superboy buys himself a little snack with borrowed money. When he returns, Robin has found footage showing Kid Amazo entering LexCorp labs and tampering with Amazo. They manage to identify the kid and to get a possible location.

On Robin’s motorcycle, they both go after Kid Amazo. Upon entering the studio where the family has been living, they find the corpses left behind by Kid Amazo. Jon is shaken by the sight of the corpses and Damian tries to calm him down. He fails and Jon flees, declaring his intention to call his dad to deal with the whole mess. Robin continues investigating the crime scene, reaching the conclusion that someone had managed to escaped. Meanwhile, Superboy is roaming through the woods when he finds Kid Amazo’s sister.

In Depth: Super Sons is a comic that works based on contrasts. Those kids have had absolutely opposite upbringings and have expectations much too different hanging upon them. This shows in their vocabulary, their body language, their habits, even in the way they banter and what they brag about. Tomasi’s familiarity with those characters makes these contrasts show at every single corner without it being distracting. The plot flows nicely and there are plenty of threads left behind for him to pick up on the following issues.

Not only is Tomasi great with portraying these characters differences, but Jimenez’s art is perfect for that as well. He is proving himself to be a master of facial and body language. In the prologue sequence, the family’s emotion can easily be read in their faces. Another great show of his ability is the sequence in the lab with Jon telling the worst piece of lie of all time. Jon fidgets while telling his tale, trying to look innocent and failing miserably. Right after he finishes speaking his body goes limp. He knows Luthor will never buy his story, but at least he has tried.

Jimenez’s art would not be as compelling without Sanchez’s colors though. Their styles are not realistic yet not overly stylized while being absolutely believable at the same time. In the colors, the sense of reality is brought by Sanchez’s use of lights. This guy understands when to use warm or cold light, what kind of object will emit different tones of light (street lights being reddish, tablet backlight being bluish) and when to contrast them. Robin and Superboy enter the studio. Behind them shines a cold light from the outside, contrasting with Robin’s flashlight, that casts a yellow beam forward. Not only that, but the reflexive surface on the floor is tinted with the colors of the boys’ capes. If that is not perfect coloring I don’t know what is. The little CLICK on top of Damian lantern also shows the quality of Leigh’s lettering.

Overall: It is only issue #2 of this series, but I feel like we are in for an amazing ride. Kid Amazo has been built based on show-don’t-tell, a rare thing in comics, and the subplots are keeping a good stride to the pacing of the storytelling. With a strong plot, fun dialogue and amazing art, there is almost no negative sides to point out in Super Sons, except that it only comes out once every month.