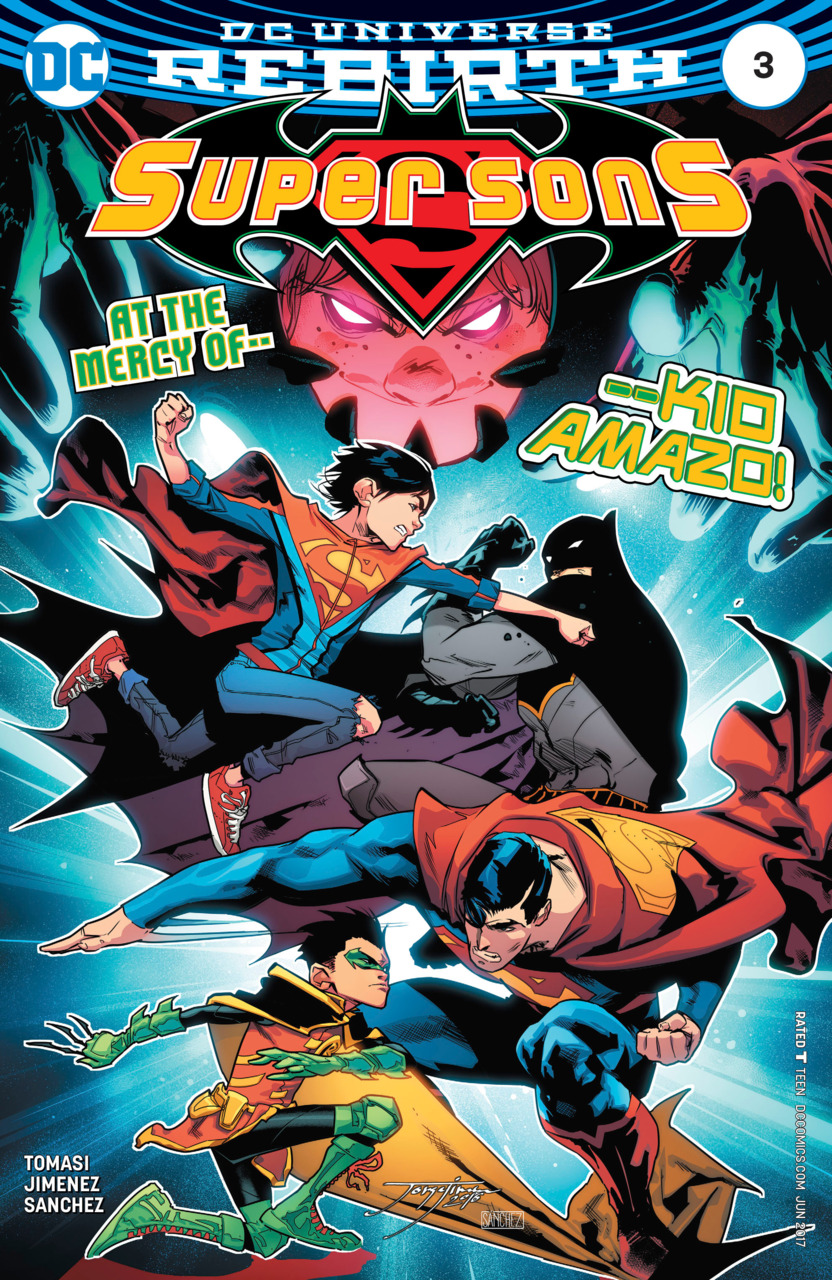 In Brief: Superboy and Robin have to fight their way out of a forest infested with Kid Amazo’s androids, even if what it takes is fighting each other.

Summary (spoilers): This action-packed issue opens with a Kid Amazo sequence showing him and his family working together as a team.

Back in the present, Superboy and Robin are being attacked by Batman and Superman, or rather the android versions of them. Reunited, they gang up to attack the droids, and it is son versus father. The boys are on the losing side of the battle until Sara, the little girl from Kid Amazo’s family that Jon helped on the previous issue, orders the androids to drop the boys.

Sara can control machines as a result of being infected with the Amazo Virus. While the trio flees from the droids, Damian explains who is Amazo, and Sara tells the boys the tale of her family. Reggie, Kid Amazo, has the power to multiply himself, which caused him to develop a case of split personality. Seeking more power, he went on to steal Amazo’s armor from LexCorp. The armor bonded with his body, and now he can split himself into multiple power-duplicating androids.

Damian and Jon continue on their will-won’t argument regarding contacting the Justice League, and Damian continues to be a bully to poor Jon. They fail to notice Sara, who seems to be disturbed by something.

Turns out Sara is actually an android, as were the supposedly dead bodies of the family from the previous issue; Kid Amazo replicated them while keeping his real family hostage. Sara managed to take control of this specific android using her powers. While she struggles with Kid Amazo for control over the android, the army of Superboys and Robins from issue #1 comes after them.

Sara offers herself as sacrifice to hold the androids back while Superboy and Robin run, promising her to find the real Sara before Reggie kills her and all of her family. We also get to the scene with Robin riding piggyback on Superboy while he rewires the severed head of one of the androids. Once finished, Robin tells Superboy that it is time for them to make a stand. The issue ends with the two boys being engulfed by a swarm of androids.

In Depth: With this issue, Tomasi puts together all of the pieces of the puzzle left scattered from issue #1. Not only that, but he has also eased the murder from the past issue, making it solely a murder-intent, since Kid Amazo, in fact, killed the androids of his family, and not his family.

For a comic book directed at a younger audience, Super Sons has been having some heavy themes, such as fratricide and split personality. Kid Amazo is not just a villain who is out to conquer the world because he thinks he is entitled to it (besides, this would have been Damian back in the day). Tomasi is building this character – especially through his relationship with his family – to have some shades of gray in him. The risk of oversimplified dualities is always lurking behind superhero stories, more so in young adult literature, but while Tomasi plays with the notion, he succeeds in not going over the edge, delivering well structured, fun characters.

Besides, the fact that Kid Amazo has bonded with Amazo and is actually not that powerful by himself creates a flaw to be exploited when the boys confront him. About the android, I always found ludicrous for Amazo to turn into any of the Bats, for the simple fact that they have no powers to replicate. I am willing to let it slide for the sake of storytelling, though.

As for Jimenez, he continues to buy me with how expressive his faces are. This issue in particular called my attention to another one of his fortes: camera movement. With almost no time for breathing between three action sequences, it is Jimenez skill with the eye camera that doesn’t let the story turn wearisome. The camera in the sequence above goes from a front shot, showing the androids chasing Superboy and Robin, to a side shot – the usual when artists depict characters running, to better show their movement -, and for the final panel the camera turns 180 degrees and is showing Superboy’s back, while Damian attacks an android. The dynamism conveyed by manipulating the camera goes much further than the simple yet overused tilted panel for action sequences.

Another nitpick of mine was the fact that while the Superman and Batman androids were exact copies of the humans, with only some telltale lines on their faces, the Superboy and Robin androids looked like they had merged with a monkey. It felt inconsistent to me. Overall: A fast-paced issue that manages to continue with the storyline while still delivering a large amount of action. Tomasi further develops Kid Amazo’s back story and Jimenez manages to put a great variety of action images together.