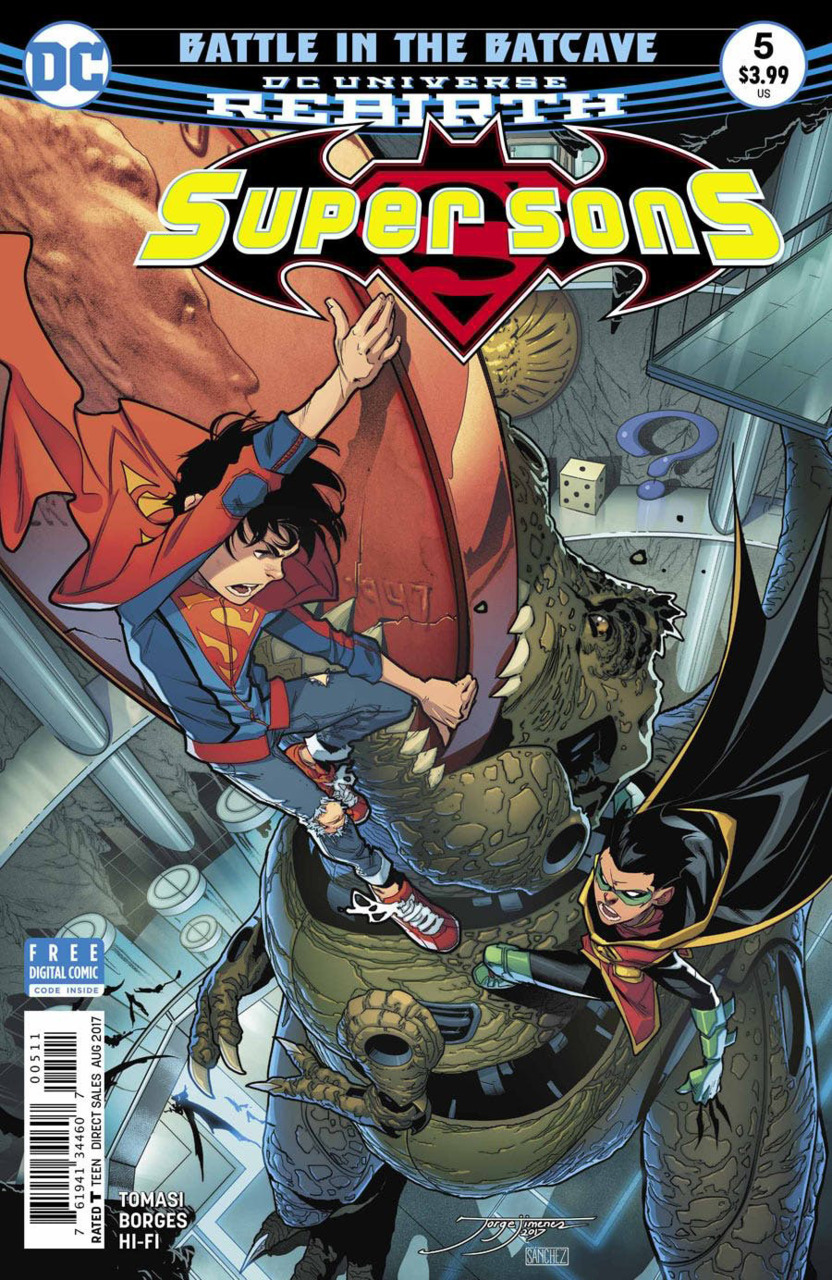 In Brief: Grounded, Superboy and Robin are having trouble coping with the restrictions in their lives. As Superboy runs away from home to clear his head, he and Robin solve their unresolved issues as they always do: by arguing some more and then ganging up when they get into trouble.

Summary: The issue starts showing the consequences the Super Sons are facing after their adventure with Kid Amazo: they are both grounded. Damian is benched and Jon is not allowed to use his powers. Jon breaks the restriction while doing his chores and gets into an argument with his parents because he does not want to move to Metropolis. He runs away and heads to Gotham.

Superboy can’t fly, so he leaps and jumps his way through Gotham to get to Wayne Manor. He breaks into the cave and startles Damian, who attacks him on sight. As he realizes who it is, Damian halts his attack and the boys discuss the consequences of their last adventure and Jon’s move to the big city. As per usual, their conversation becomes a brawl, but they are interrupted by Alfred bringing them dinner. The butler makes a connection between the animosity between the boys with the beginning of the relationship between Clark and Bruce and points out how now they have become friends after a while. The Super-Dads arrive and have a talk with the boys, officially allowing them to get into trouble as long as they are together.

In Depth: Strictly speaking, this is a filler issue, but it is what every filler issue dreams of being. I always find myself smiling when reading Super Sons, but this made me actually laugh out loud, beginning with Jon and Damian suffering from two of the most common and recurring problems of children: boredom and refusal to accept change. This is what “are we there yet?” sounds like when you are Robin, and this is what a tantrum looks like if you are Superboy.

A faithful depiction of children is nothing less than what I’ve come to expect from Tomasi, but it was delightful to be reminded of how great he is writing Alfred. Some of the best dialogue in this issue comes with a British accent and is delivered with a tongue in cheek humor that is inherent to the butler’s character, an aspect extremely well explored at the hands of Tomasi. “Your father considers many things a waste of time, such as sleeping” shall never be forgotten, together with Alfred telling the boys to “please step out of the dinosaur’s buttocks”. Something often forgotten by authors writing the Waynes is how unorthodox of a family they are. What I mean by this is that people often overlook Alfred’s role as a parental figure of the Robins and that children acquire mannerisms from their parents. Tomasi, giving the incredible attention to detail he always does, shows us how Alfred has rubbed into Bruce and Damian through their humor. Evidence number 1 is Bruce arguing with Clark that he would win in a fight between the two. Evidence number 2 comes from the page that made me realize how much of a great letterer Rob Leigh is. This double page spread looks like a nightmare to letter and yet it can be followed effortlessly. Alfred’s dry humor can be seen in Damian’s reply to Jon when asked if Bruce got mad. “Who can tell? He is always mad.” This page also shows the strengths and weaknesses of Alisson Borges. His art is extremely dynamic and expressive, which is indispensable for a comic book with children as the main characters. Sometimes, though, his proportions and perspective get slightly distorted. Nothing appalling, but there were some panels where I could tell that something was off. That being said, his graphic storytelling flows nicely and the variation he uses in panel shapes and backgrounds adds layers of meaning to the drawings. His greatest asset here though is the cartoonish aspect of his style, which makes for a good continuation from Jorge Jimenez while still being remarkably different.

Overall: A humorous, well-developed filler issue, with some unforgettable panels and dialogue. Alisson Borges holds Jorge Jimenez’s torch with honors and Tomasi continues being one of the best writers when it comes to characterization.