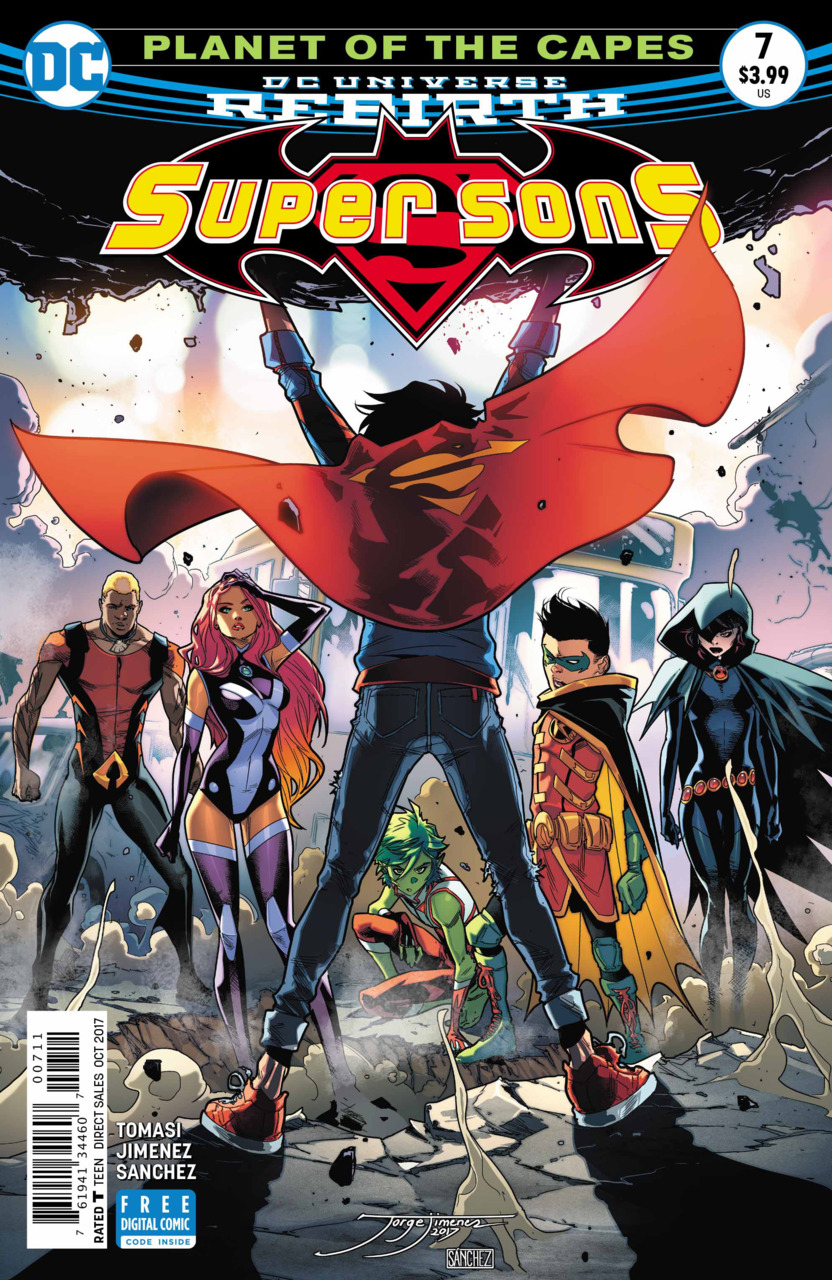 Overview: Joined by Superboy, the Teen Titans have to face the Forgotten Villains in order to restore Robin to his natural age.

Synopsis (spoilers ahead): The Titans are gathered in the Kents’ apartment, mulling over their defeat. Meanwhile, old-man-Robin is stuck in the bathroom, having an elderly person’s… bowel problems. While they wait for him, the Titans invite Jon to help them with their mission. Robin’s constant telling him he is too young makes him hesitant at first, but he remembers his dad telling him that they help people because “good people get involved”, and so he accepts the invitation. Robin says he is too old to care anyway. The Titans then fly out of the balcony and head to Kraklow’s hideout.

Back in the den of Kraklow the magician, he is going over his plan for ultimate recognition as the most magnificent magician of all. Turns out a version of himself from another reality appeared to him one day, presenting him with the magic clay that allowed him to create Time Commander, Atom-Master and Chun-Yull.

The Titans get to his hideout, Superboy leading the way. Aqualad brings a wave with him that affects the villain’s clay bodies, but Time Commander is still able to freeze time. As he and Kraklow flee, Superboy is able to unthaw time. Robin wastes no time and puts a plan into action, sending Beast Boy to track down the magician, Starfire and Aqualad to take the other two villains, while he and Raven go after Time Commander.

In the middle of the fight with the Titans, the villains start to decompose. The team regroups with a now de-aged Robin and lion-shaped Beast Boy, who is carrying Kraklow as if he were a kitten. Kraklow is indignant for having being stopped by “ignorant children”, Scooby-Doo villain style.

As the Titans take Kraklow into their ship, the team tells Superboy that he would be welcome to join them anytime. Superboy is ecstatic about the invitation. He and Robin return to the fight scene to gather evidence. As they return to their usual arguing mode, a portal to the dimension from where the clay came is opened and some robotic-looking monsters take the boys.

Analysis: Once again the Super Sons team gives us an utterly fun issue with absolute quality. It only took two issues to make this my favorite Teen Titans story in Rebirth to this point, even if this is a Superboy story through and through. It is told majorly from his point of view – though Peter Tomasi won’t use narration balloons, making for much more fluid read. Jon went through a whole arc in this issue alone, coming from self-doubt to sheer joy, to fighter mode and back to adorable child in 20 pages, proving that character development can be done in short stories. These three panels are a quiet statement to how terrific the whole team is. Let us start with characterization. Aqualad is drinking water, being from the oceans he probably gets thirsty all the time; and then Beast Boy cracks a joke as he always does, while Jon is being his insecure, adorable self and Raven is being her straight-to-business, realistic self. Let us all remember that back when The New Teen Titans got created by Marv Wolfman and George Perez, she was the one to rally the team because she needed help to defeat her father. Then there is Superman, saying the one sentence that defines him: good people get involved. This panel also shows how letters and colors are important. This is a flashback from last issue, seen from Jon’s perspective. Alejandro Sanchez colored it with a haze around Superman that tells us that this is not happening right now, and Rob Leigh chose to use cream balloons. Those two elements, together with the absence of background, immediately tell us that this is a memory.

About characterization, it has been a while since I got so happy with Starfire’s depiction. She looks fierce and competent, easily the strongest member of the team. Here, Jorge depicted her as the warrior she is. The interaction between the Titans and Superboy was absolutely believable. They treat him with the respect they have for the S he carries on his chest, but also as the child that he still is, with all the insecurities that a child might have. As for the villains, it took me a guy coming out of a different dimension of the multiverse – and what a beautifully colored page that is – to realize that the Forgotten Villains might have existed before. Turns out they first got together under that guise in the pages of DC Comics Presents Vol 1 #77, written by Marv Wolfman. Final Thoughts: Focused on Superboy and his interactions with the Teen Titans, this issue will make you wish the Super Sons team took over the Teen Titans. Also, their invitation for Jon to join them whenever he feels like it gives me hope for a team with Superboy in it.