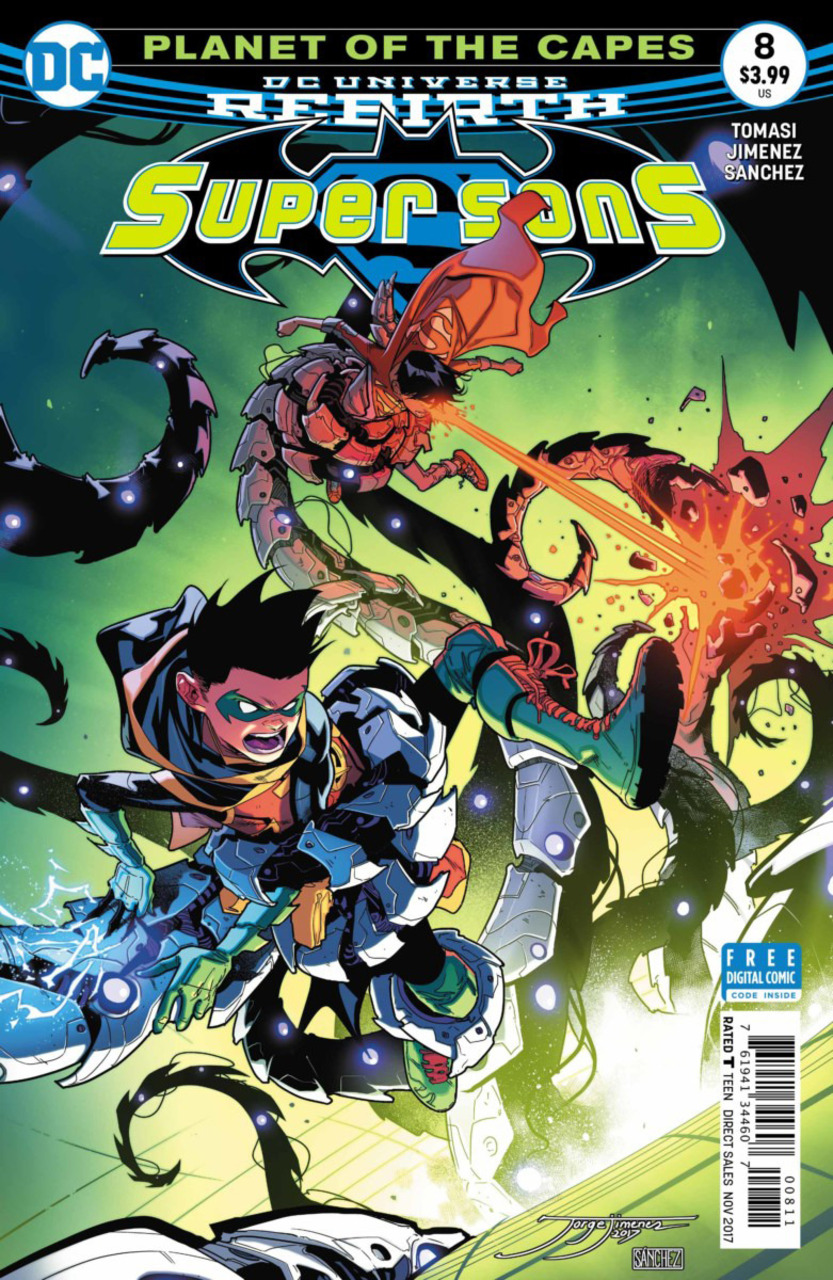 Overview: Robin and Superboy are taken to a different dimension, landing on a planet that is being slowly eaten by Ygarddis, a cosmic parasite.

Synopsis (spoilers ahead): The issue picks up exactly where the previous one left off, with Robin and Jon getting pulled by tentacles through a portal. The kidnapper turns out to be a giant head with tentacles who demands them to “returrrn the lifedirrrttt”. The boys are deep in trouble when two girls, Big Shot and Hard Line, come to their rescue. Together, the four of them defeat the tentacles – only for now, since they belong to Ygarddis, and Ygarddis is the planet itself.

The tentacled being is a conqueror of planets, draining their resources to feed himself, a cosmic parasite. Big Shot and Hard Line take the boys to their village, where refugees of their home planet are living. They are from Eoroe, the land that gives this arc its title, “Planet of the Capes”, for this planet housed a number of people gifted with special talents and abilities who were protectors of its citizens. Hard Line and Big Shot were yet children, but eager to join the good fight. Theirs was the Golden Age of Heroes, until Ygarddis came and took their world. The majority of the population got killed, but Kraklow, a hero in their dimension, helped save a number of people.

The group proceeds to enter the village so that they can discuss their plan of action to take down Ygarddis. For Robin, though, their priority should be getting home, while for Superboy they cannot refuse to help those people. As they enter the village, a little boy gets attacked by Chun Yull, the Faceless Hunter. Robin and Superboy spring into action, working more as a team than ever before, and defeat the clay villain in a heartbeat.

Meanwhile, in the core of Ygarddis, the Kraklow of this dimension is being held by tentacles as more heroes are being created from the magic clay, the lifedirt.

Night falls and Robin, after doing some reconnaissance around the village, returns to the hut where he and Superboy will be staying for the night. Jon is having trouble to sleep, worried that they might not go home. Damian reassures him that yes, they will. He tells Jon that the weirdness he is feeling in the atmosphere is due to the different density of the air.

Robin tells Superboy that they should remain close to the village and that he doesn’t trust the water supply. As he pours a compose he’s taken from his belt into the water, Jon proceeds to talk about his theory that this dimension has a different Kraklow. That Ygarddis might be feeding with the magic clay and that, by sending it to another dimension, Kraklow may have been trying to starve the living planet. At this very moment, a multitude of capes invades the village, Ygarddis leading them. They have come for the other-worlders.

Analysis: My expectations from Tomasi are high and I have yet to be disappointed by him. You put any character in his hands and he will take that already beaten and bruised clay – to use a theme from this arc – and he will slowly, carefully sculpt it, turn it into a recognizable shape, bend it in some places to his will. Comic books heroes are hard characters to write, particularly when the story is in continuity; they have history, they do not belong to a single person, they are a product of their history. Tomasi will often pull from that history and add some little nuances, like Damian playing the violin.

There is a reason for me to have dedicated this first paragraph to praising his writing. This was the issue where Jon and Damian’s relationship finally fitted into the friendship mold Tomasi had been sculpting since the beginning of the series. They started as rivals, reluctantly working together. They evolved to pure banter and teasing. They have now reached a point where they are taking care of each other and exchanging life experiences. Don’t get me wrong, this is an issue with its fair share of action. We get introduced to two new characters, they fight both Ygarddis and a clay villain, and they find out what happened to the planet. But this was the scene that, for me, deserved a standing ovation. Damian’s death and resurrection are no light matter, but he is willing to scratch the surface of it when talking with Jon. Not only that, he is worried about Jon, despite the fact that he is, you know, Superboy.

This was also the scene where Alejandro Sanchez shined the most. In fact, Alejandro was the star of this issue. The moonlight shining from behind Damian on Jon’s face is not something every colorist would even mind to add. Not only that, but the panel that came before this scene is altogether a piece of stunning coloring. If you ever go to an isolated place on our own Earth and look up to the sky at night you will probably see the Milky Way in very similar fashion. The boys are on a planet with no electricity, so the galaxy is not being outshined by city lights. The windows are glowing at night with firelight, and we can actually tell the difference. The temperature of color on each and every light is just absolutely on point. Without the combination of flat colors and realistic lighting that Alejandro brings, Jorge Jimenez’s art would be much less stunning than it is.

We also got to see new characters designed by this stellar team, Hard Line and Big Shot. They are both an interesting new insertion and make for the downside of the issue. While they are promising, I felt like they were too obvious plot devices during this issue. Almost all of their scenes are them telling the boys about the situation on their planet, making them essentially exposition devices. Those are two characters that could use – and deserve to have – a little fleshing out.

As for their design, beyond the fact that their tattered and frayed uniforms are an amazing contrast to the boys’ colorful clothes, those two are very much this world’s Super Sons. Or should I say, Super Daughters. They are children, they wanted to grow up and fight alongside the heroes of their planet. Big Shot has a jetpack and is altogether thinner than Hard Line, who has a dark stain around her eyes much like a domino mask and gets around by running instead of flying. That and their names. The combination of how much Damian uses his grappling gun as a lasso on this issue with the “rope-slinger” joke was what gave it away for me. Final Thoughts: Despite being predominantly an exposition issue, Tomasi manages to fit into it equal parts action and character building moments, making it a fun and worthwhile reading. An essential chapter in this arc and for better understanding the evolution of the friendship between Robin and Superboy.