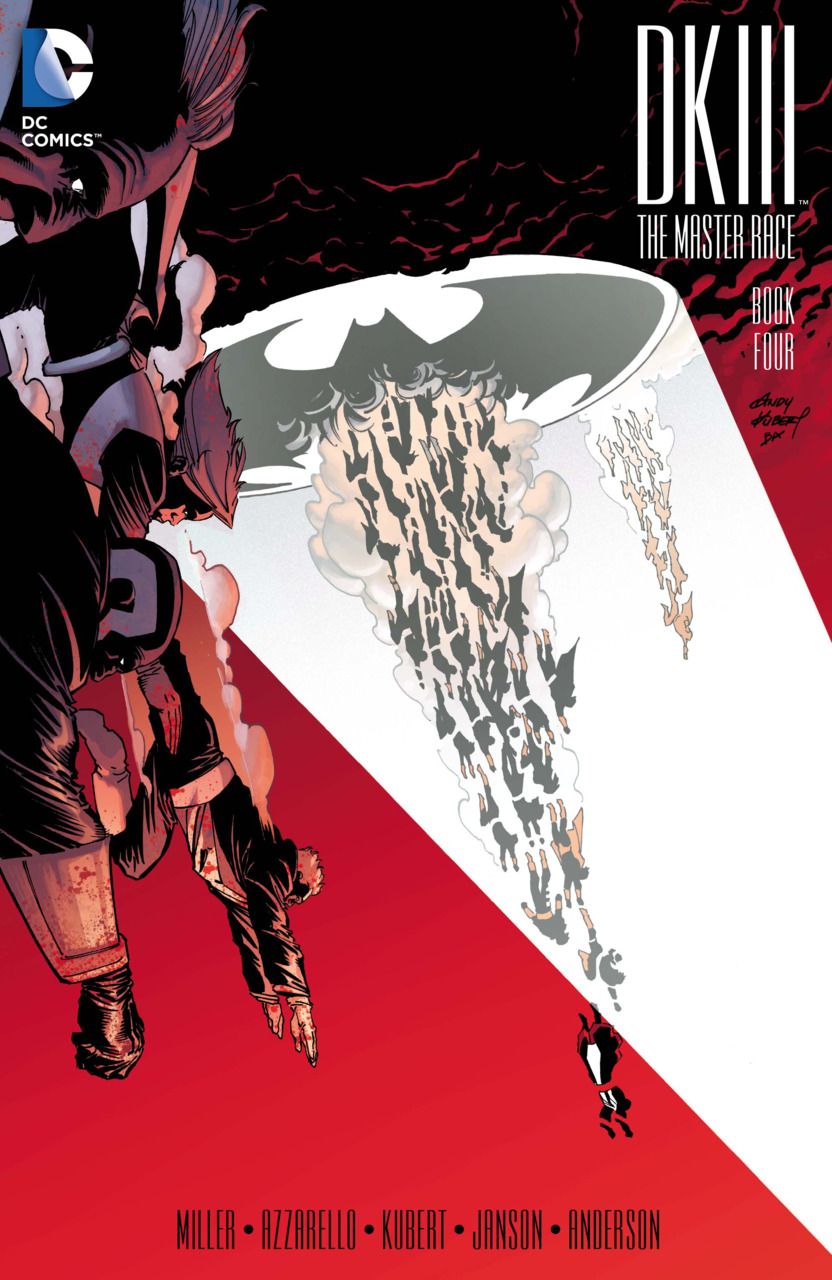 Synopsis: The story starts off with the continuation of Superman against his daughter, Lara. She feels that Clark has betrayed his true people, the Kandorians, and has decided to help them take over the world as the gods they believe themselves to be. As Superman tries to dissuade Lara from joining Quar, the evil Kryptonian merely stands by and watches as Lara beats Clark to a pulp and sends him careening through buildings across the globe. Superman, however, refuses to fight his daughter and takes the beating which lasts for hours.

During the epic beatdown, Bruce and Carrie sit in the Batcave and watch the one-sided battle unfold. Carrie begs Bruce to help but he states that only one person can stop what is happening…and he is refusing to do so.

Crawling into the Fortress of Solitude, Superman is bloodied and broken. Above him hovers the army of Kryptonians. Quar accuses Clark of treason against his people and the verdict among the people of Kandor is “guilty”. Clark is then engulfed in Black Matter and frozen in place. Quar and his followers then proceed to melt the entire Fortress down then freeze the land so it looks as if there was never anything there at all.

As the Kryptonians fly away from the Arctic, Quar makes his demands to the world and, more specifically, to the citizens of Gotham. He orders them to turn over Batman to him in thirty-six or he will wipe them out.

On Amazon Island, Wonder Woman is shown ignoring an incoming call from Bruce. She remarks that the people have decided to turn him over and that she must abide by their decisions, despite her objection to them.

Gotham City soon begins to crumble into chaos and anarchy as people riot and demand for the Batman to be turned over to Quar. In the Batcave, Carrie injects Bruce with something to dull his aging pains. He then gives Carrie a mission and a graduation present (Batgirl costume).

Outside the city, the Flash is racing in to presumably help when a Kryptonian flies into his legs and cripples him.

On top of the GCPD, Commissioner Yindel is drinking and looking on as the city turns to madness. Bruce appears in full uniform ready to help her in this next fight.

The issue ends with a shot of the Atom, thought to be dead, floating in some sort of subatomic space and realizing he can fix the situation he is in.

Thoughts: It would be an understatement to say that this issue disappointed me. After another month hiatus, I found myself already going into this issue unexcited. After reading, it has not done really anything to get me looking forward to whenever the fifth issue comes out.

Any positives that were present in this issue felt insignificant with the multitude of poor characterizations and plot development. Beginning with the few positives, I did like how Quar and his followers destroyed the Fortress of Solitude. Turning the Arctic into a watery ocean and then freezing it again to reveal no trace of the Fortress was a nice way for them to say to Superman that it was like he was never there. It is clear that their power is unmatched and I am slightly intrigued as to how the heroes will take them down.

The other positive I took away (the irony of which is that the writing team took it away just as quickly) was the introduction of the Flash. Of course, as soon as he appears he is crippled which frustrated me as I was hoping for some kind of fight scene between Barry and some Kandorians. It was mentioned on the podcast but this story does not seem so much of a Batman story but more of a Justice League story set in the Dark Knight Universe. Having come to terms with that, I was hoping for more direct action from these other heroes and not just teases to their presence in the world.

Some of the negatives I found included the freezing of Superman (again) as well as the noncommittal Batman who felt that their only chance to beat Quar and his people lay with Superman. With the last issue giving us Batman in full uniform “bat-growling” to the enemy, we now see a Batman completely cool with sitting on the sidelines and hoping his bitter rival in his latter years will save the day. Now, I suppose the creative team could be pulling a fast one on us but I have my doubts. It just seemed out of character for him along with a few others like Wonder Woman, who I also do not see standing by while her daughter beats Clark to a bloody pulp and lets him die.

Now with Quar’s sudden obsession with Batman, it seems the story has found its way back to Gotham and Batman will now have to go toe to toe with an army of Kryptonians…even if that’s what Miller wants I have a feeling other Justice League members will finally pop up in full force next issue to help. I really hope that the next issue reveals I was wrong about my criticisms but at this point I just could not buy into this issue.