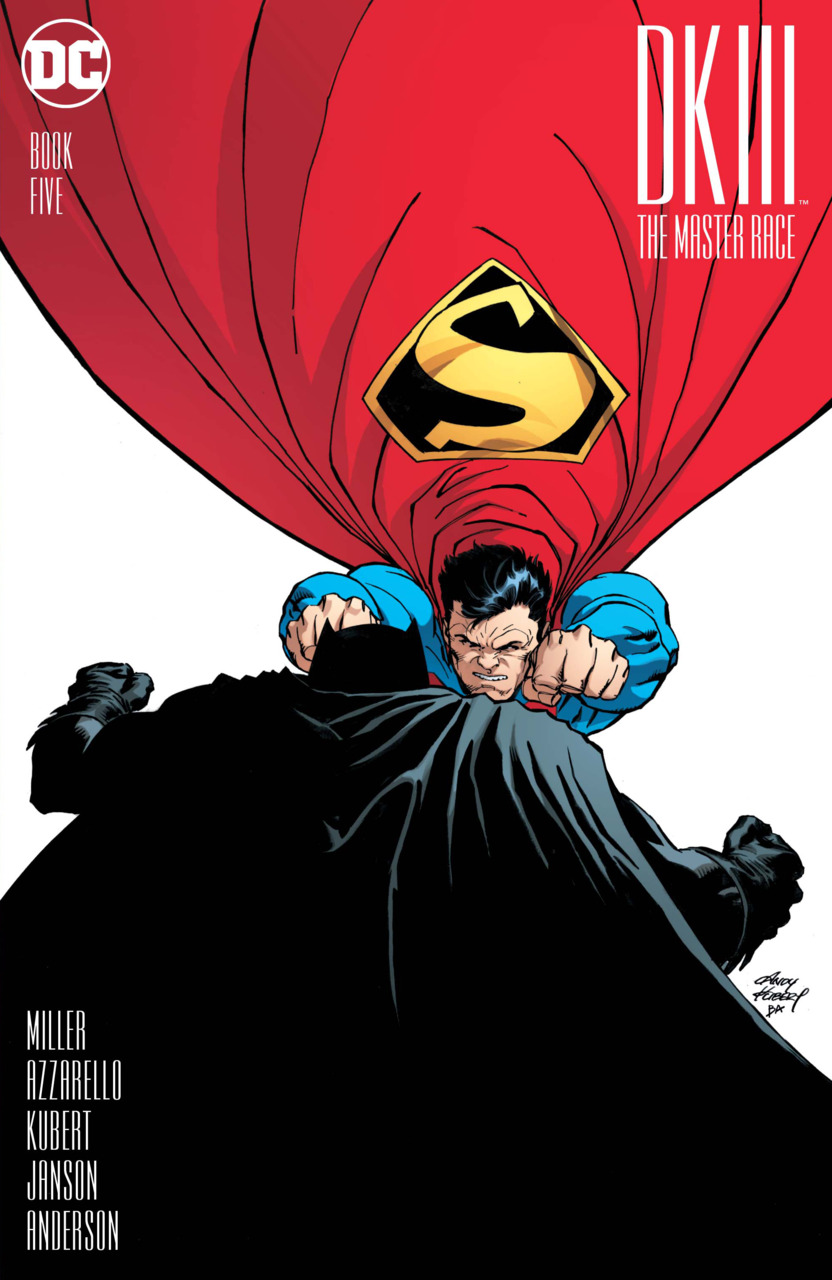 Gotham is tearing itself apart, yet again, in the pages of Dark Knight III #5.  It’s comforting, in a way, to know that nothing ever really changes.  The only difference is this time the chaos is working to Batman’s advantage.   As he plans the eventual assault on the Kandorian cult, Carrie has been rescued by Aquaman of all people, the last of the Big Six to make his appearance in Frank Miller’s Dark Knight universe.  He has supplied Carrie with Atlantean armor which allows her to breath while submersed and riding a giant hammerhead shark.  Their journey is short-lived as they soon arrive at their destination – the sunken remains of Superman.

Back on the surface, Lara and Quar discuss the differences in their approach to hunting, Quar use of the humans in a direct attack to find Batman and Lara’s stealth approach, learned from her Amazon training.  The discussion leads to Quar learning of the existence of a second Amazonian and Kryptonian child.  While Commissioner Yindel prepares for the fight, Aquaman learns the plan to rescue Superman from his other-dimensionly prison.  They poke a hole of sorts into the black matter with a specially coated needle, creating something for Superman to focus on, allowing him to navigate back to this reality.  The plan, of course, is successful.  The group trades pleasantries and Superman wastes no time in letting them know he plans to act immediately.

In Gotham, the clock is winding down on the timetable for Quar’s demand for Batman’s surrender.  The city is full-scale rioting now, and Quar appreciates their willfulness and passion, remarking that when it is turned towards him they will be wonderful followers.  While Quar sees worthiness, Batman sees fear, a constant motivating factor for himself.  As Batman makes his appearance on the streets of Gotham in the current Bat-Tank, Superman and Carrie return to the Batcave where The Flash, sidelined from action due to the breaking of his legs, is using his speed to run computer programs in an attempt to manipulate weather patterns above Gotham.  His efforts begin taking shape as thunder and lightning grace the sky.

The appointed time has come, and without a surrender from Batman, the Kandorians begin their attack.  Simultaneously, Commissioner Yindel flips the switch on an old Batman stand-by, the Bat-Signal.  The signal illuminates the Kandorians as it begins raining green from the skies and Batman’s gambit is revealed.  The clouds have been seeded with a synthetic Kryptonite, and the rain, while not completely effective, weakens the Kandorian’s power levels as they crash to the ground.  With the odds closer to even, Batman and the mob turn on the Kandorians.  The much older and worse for the wear Batman begins hand to hand combat, and after getting a few good shots in takes the brunt of the attack from weakened Kryptonian, which is still a lot for him to handle in his state, even with his power armor.  He stumbles back, but is held up by Superman, in a power armor of his own, protecting him from the Kryptonite rain.  We close on the pair, ready to take the fight to Quar.

Things are progressing nicely.  While there are some tropey aspects to the story, as well as some glaring deus ex machina, they are fun and reminiscent of a much older version of storytelling, where the story focused less on the explaining of exactly what is happening and directs more attention towards the action itself.  The players are quickly moving in to position for Miller and Azzarello’s end game.  There are three issues left, so it remains to be seen if this is the true climax of the story or just another plot beat that gets us there.  With so many characters getting page time, things still feel very balanced.  Notably absent from this installment are the talking head interludes so often used, to varying degrees of success, in the Dark Knight series.  Andy Kubert and Klaus Janson’s art continues to be solid.  Nothing is overly flashy, and old Frank Miller style visual storytelling styles are put to good use.  There are a few diamonds dropped throughout the issue that stood out and got me interested.  The look on Superman’s face after escaping.  The Bat-Tank and Gotham on fire.  The Bat Signal.  Good visual touch stones are as powerful as well-executed story beats.

The back up story is an interlude that really isn’t worth mentioning as it does not add much to the story.  Baal and Lara share a little Kryptonian/Amazonian flirting, namely alternating kissing and punching, and we’re left wondering how invested Lara is in her Kryptonian comrades’ plot.  In truth, I don’t find much appealing about Lara as a character.  She’s not even fun to hate.  This is easily the most disappointing of the various “one shot” stories released.